In Christianity, a collegiate church is a church where the daily office of worship is maintained by a college of canons; a non-monastic, or "secular" community of clergy, organised as a self-governing corporate body, which may be presided over by a dean or provost. In its governance and religious observance a collegiate church is similar to a cathedral, although a collegiate church is not the seat of a bishop, and has no diocesan responsibilities. Collegiate churches were often supported by (extensive) lands held by the church, or by tithe income from appropriated benefices. They commonly provide distinct spaces respectively for congregational worship, and for the choir offices of their clerical community.

In the early medieval period, before the development of the parish system in Western Christianity, many new church foundations were staffed by groups of secular priests, living a communal life and serving an extensive territory. In England these churches were termed minsters, from the Latin monasterium, although confusingly only a few were strictly monastic. In the 9th and 10th centuries many such churches adopted formal rules of governance, commonly derived from those composed by Chrodegang of Metz for Metz cathedral, and thenceforth came to be described as "collegiate"; and there were also new foundations of this type. From the 11th century onwards, the richer collegiate churches tended to be provided with new statutes establishing the college as a formal chapter such that each canon was supported by a separate endowment, or prebend; such canons being termed prebendaries. In less affluent foundations, the pooled endowments of the community were apportioned between the canons, such canons being termed portioners. Both prebendaries and portioners tended in this period to abandon communal living, each canon establishing his own house within the precinct of the church. In response to which, and generally on account of widespead concern that the religious life of collegiate communities might be insufficiently rigorous, many collegiate foundations in the 12th century adopted the Augustinian rule, and become fully monastic, as for example at Dorchester Abbey and Christchurch Priory.

Because each prebend provided a discrete source of income, in the later medieval period prebendaries increasingly tended to be non-resident, paying a vicar to undertake divine service in their place. Kings and bishops came to regard prebends as useful sources of income for favoured servants and supporters, and it was not uncommon for a bishop or archbishop also to hold half a dozen or more collegiate prebends or deaneries. From the 13th century onwards, existing collegiate foundations (like monasteries) also attracted chantry endowments, usually a legacy in a will providing for masses to be sung for the repose of the souls of the testator and their families by the collegiate clergy or their vicars. The same impetus to establish endowed prayer also led to many new collegiate foundations in this later period; under which the rectory of an existing parish church would be appropriated to the new chantry college; and a new organisational structure was developed for these bodies, by which endowment income was held collectively, and each canon received a fixed stipend conditional on being personally resident, such canons being termed fellows, led by a warden. Chantry colleges still maintained the daily divine office with the additional prime function of offering masses in intercession for departed members of the founder's family; but also typically served charitable or educational purposes, such as providing hospitals or schools.

One particular development of the chantry college principle was the establishment in university cities of collegiate foundations in which the fellows were graduate academics and university teachers. Local parish churches were appropriated to these foundations, thereby initially acquiring collegiate status. However, this form of college developed radically in the later Middle Ages after the pattern of New College, Oxford, where for the first time college residence was extended to include undergraduate students. Thereafter university collegiate bodies developed into a distinct type of religious establishment whose regular worship took place in dedicated college chapels rather than in collegiate churches; and in this form they survived the Reformation in England in the universities of Oxford and Cambridge; as also did the associated collegiate schools and chapels of Eton College and Winchester College.

In a collegiate church or chapel, as in a cathedral, the canons or fellows are typically seated separately from any provision for a lay congregation, in quire stalls parallel with the south and north walls facing inwards rather than towards the altar at the eastern end. This has influenced the design of other churches in that the singing choir is seen as representing the idea of a college. The Westminster model of parliamentary seating arrangement arose from Parliament's use of the collegiate St Stephen's Chapel Westminster for its sittings, until Westminster Palace burned down in 1834.

The chapel at St. Paul's Collegiate Church at Storrs.

The idea of a "collegiate church" has continued to develop a contemporary equivalent. Many contemporary Collegiate Churches draw on the idea that collegiate means a "church with more than one minister", often understood as reflected in the "priesthood of all believers" and local, congregational governance.

St. Paul's Collegiate Church at Storrs features contemporary architecture reflecting traditional collegiate church architecture (pictured). Unlike most historical collegiate churches, this is a non-denominational, evangelical church. According to church leaders, they chose the name "collegiate" to emphasize "the priesthood of all believers" and that "every member of the Body of Christ is a minister."

While collegiate churches typically have its seating arranged parallel with the south and north walls, facing inwards rather than towards the altar at the eastern end, St. Paul's Collegiate Church has adapted this by creating a chapel fully in the round, with the altar/communion station in the center.

In pre-Reformation England there were usually a number of collegiate churches in each diocese, with several hundred in total. They were mostly abolished during the reign of Edward VI of England in 1547 as part of the Reformation by the Act for the Dissolution of Collegiate Churches and Chantries. Almost all continue to serve as parish churches with a resident rector, vicar or curate. Two major collegiate churches however, Manchester and Southwell, were refounded with a collegiate body after the Reformation; and these were joined by the revived college at Ripon in 1604, all three churches maintaining choral foundations for daily worship. These three churches became cathedrals in the 19th century. Hence, at the beginning the 20th century, the royal peculiars alone survived with a functioning non-cathedral and non-academic collegiate body.

The colleges of Oxford and Cambridge universities, and the schools of Eton and Winchester, successfully resisted dissolution at the Reformation, arguing that their chantry origins had effectively been subsumed within their continuing academic and religious functions; and pleading that they be permitted simply to cease maintaining their chantries and obituarys. For the most part, they had already ceased to undertake collegiate worship in their appropriated churches, which reverted to normal parish status, as for example at the Church of St. Mary Magdalene, Bridgnorth. The chapel of Merton College, Oxford however, continued to double as a collegiate church until 1891; just as the chapel of Christ Church, Oxford doubles as the cathedral of Oxford to this day. The Church of St. Mary Magdalene, Newark-on-Trent though never collegiate in the medieval period, maintained a choral foundation for collegiate worship after the Reformation in association with the Magnus Bequest, an arrangement that continued till 1901.

Otherwise, twelve colleges survived the Reformation in England and Wales in nominal form. In some cases these were refoundations under Queen Mary (as for instance the college of Wolverhampton); in other cases, they may simply have been overlooked by the suppression commissioners. Unlike at Manchester, Ripon and Southwell, these churches did not continue to maintain regular collegiate worship, but their prebends or portioners persisted as non-resident sinecures, and as such were almost all finally dissolved by the Cathedrals Act of 1840. However, the Victorian legislators themselves overlooked the college of Saint Endellion in Cornwall, and this uniquely continues to this day, having in 1929 been provided with new statutes that re-established non-resident unpaid prebends and an annual chapter.

In England at the end of the twentieth century there were sixteen churches or chapels with the title of Royal Peculiar not all of which were still in regular use for worship. Of these only two are collegiate, each with a Dean and a Chapter of four secular Canons. These are:

The roofs of St. Mary's Collegiate Church in Youghal from the South 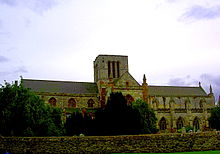 The church now referred to as 'St Giles Cathedral', in Edinburgh, became a collegiate church in 1466, less than a century before the Scottish Reformation.

St Peter's Collegiate Church, Ruthin was built by John de Grey in 1310, following the erection of Ruthin Castle by his father, Reginald de Grey in 1277. For some time before this, Ruthin had been the home of a nunnery and a prior. From 1310 to 1536 St Peter's was a Collegiate Church served by a Warden and seven priests.

Following the dissolution of the College its work was restored on a new pattern by Gabriel Goodman (1528–1601), a Ruthin man who became Dean of Westminster in 1561. Goodman re-established Ruthin school in 1574 and refounded the Almshouses of Christ's Hospital, together with the Wardenship of Ruthin in 1590. Since then, St Peter's has continued as a Parochial and Collegiate Church with its Warden, Churchwardens and Parochial Church Council. A close relationship is maintained between the Church, Ruthin School and the Almshouses of Christ's Hospital.

The church has a fine Wadsworth-Willis 4 manual Organ and a strong Choral tradition.