Princess Amelia of the United Kingdom

Princess Amelia of the United Kingdom 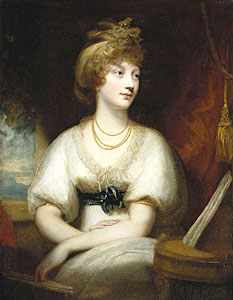 Princess Amelia was born on 7 August 1783, at the , Windsor, the youngest of George III and Queen Charlotte's fifteen children. She is reputed to have been her father's favourite and he called her "Emily." As the daughter of the monarch, she was styled "HRH" The Princess Amelia from birth.

Amelia and her sisters, Charlotte, Augusta Sophia, Elizabeth, Mary and Sophia were over-protected and isolated, which restricted their meeting eligible suitors of their own age.

In 1803 Amelia fell in love with Hon. Sir Charles FitzRoy, an 21 years older than herself, and the son of . The Queen was told of the affair by a servant, but turned a blind eye. It was hoped that such discretion would prevent the King from discovering the liaison, and the shock sending him into one of the bouts of mental illness to which he was becoming increasingly prone. Amelia knew she could not legally marry FitzRoy due to the provisions of the Royal Marriages Act passed by her father's Parliament (at least until she reached the age of 25, after which she could receive permission by assent of the Privy Council).

Princess Amelia was quite healthy until the age of fifteen, when she wrote "I wish the wind would go down. It hurts the drumsticks of my ears". Later that year she started to suffer the early symptoms of what turned out to be . In 1808, she had a severe attack of and the depressed atmosphere at home with her mother in Windsor made her even more miserable. The anxious King George decided to send Amelia for a seaside cure at accompanied by her sister Mary. Her health was improved only a little, but she found comfort in quietly resting. In 1809 she could occasionally take short walks in the garden. This improvement was but temporary, however, and in August 1810 her sufferings grew sharper, whilst in October of that year she was seized with St. Anthony's fire (), which cut off all hope and confined her to her bed on the 25th. The king summoned his daughter's physicians to him at seven o'clock every morning and three or four other times during the day, questioning them minutely as to her condition. The dying princess had a mourning ring made for the king, composed of a lock of her hair, under crystal, set round with diamonds. She lingered a few days more, waited upon to the last by her favourite and devoted sister, the . [http://www.thepeerage.com/e165.htm]

Her eldest brother, later George IV, was her godfather and is reputed to have requested her .

After Amelia's death, George Villiers, the King's , and younger brother of , attempted to blackmail the King and Queen with letters belonging to Amelia, after the disappearance of £280,000 in his control - Villiers was father of later diplomat and statesman ,

Her death led to a decline in her father's health which resulted in his insanity and the subsequent invocation of the of 1811. She was buried in the royal vault in St George's Chapel, Windsor

As of 1789, as a daughter of the sovereign, Amelia had use of the arms of the kingdom, differenced by a "label argent of three points, the centre point bearing a rose gules, the outer points each bearing a heart gules". [ [http://www.heraldica.org/topics/britain/cadency.htm Marks of Cadency in the British Royal Family] ]