George V (George Frederick Alexander Charles Ernest Augustus; 27 May 1819 – 12 June 1878) was King of Hanover, the only child of Ernest Augustus I, and a grandchild of King George III of the United Kingdom. In the peerage of Great Britain, he was 2nd Duke of Cumberland and Teviotdale, 2nd Earl of Armagh. He was the fifth and final King of Hanover.

George V, a first cousin of Queen Victoria, inherited the Hanoverian realm (which could not pass to Victoria because of Salic law) through his father, who ascended the throne of Hanover in place of Victoria. George spent his childhood in Berlin and in Britain, losing the sight of one eye following a childhood accident and illness in 1828.[1] He lost the sight in the other eye in 1833.[2] His uncle, William IV, created him a Knight of the Garter on 15 August 1835. His father had hoped that the young prince might marry his cousin Victoria, thus keeping the British and Hanoverian thrones united, but nothing ever came of that desire and on King William's death, Victoria became Queen of the UK and George became 1st in line to the Hanoverian throne and 2nd in line to the British throne (after his father).

Prince George of Cumberland was born in Berlin, the only son of Prince Ernest Augustus, Duke of Cumberland, himself fifth son of George III, and his wife, Princess Frederica, Duchess of Cumberland.

Upon the death of William IV and the accession of Queen Victoria to the British throne, the 123-year personal union of the British and Hanoverian thrones ended due to the operation of Salic Law in the German states. The Duke of Cumberland succeeded to the Hanoverian throne as Ernst August I, and Prince George became the Crown Prince of Hanover. As a legitimate male-line descendant of George III, he remained a member of the British Royal Family, and second in line to the British throne, until the birth of Queen Victoria's first child, Victoria, Princess Royal, in 1840. Since he was totally blind, there were doubts as to whether the Crown Prince was qualified to succeed as king of Hanover; but his father decided that he should do so. 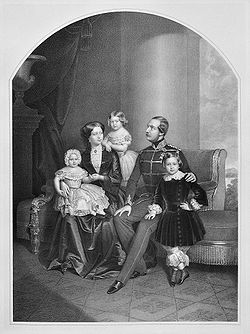 The Crown Prince succeeded his father as the King of Hanover and Duke of Brunswick-Lüneburg, as well as Duke of Cumberland and Teviotdale, in the Peerage of Great Britain, and Earl of Armagh, in the Peerage of Ireland, on 18 November 1851, assuming the style George V.

From his father and from his maternal uncle, Prince Charles Frederick of Mecklenburg-Strelitz, one of the most influential men at the Prussian court, George had learned to take a very high and autocratic view of royal authority. During his 15-year reign, he engaged in frequent disputes with the Hanoverian parliament. Having supported Austria in the Diet of the German Confederation in June 1866, he refused, contrary to the wishes of his parliament, to assent to the Prussian demand that Hanover should observe an unarmed neutrality during the Austro-Prussian War. As a result, the Prussian army occupied Hanover and the Hanoverian army surrendered on 29 June 1866, the King and royal family having fled to Austria. The Prussian government formally annexed Hanover on 20 September, but the deposed King never renounced his rights to the throne nor acknowledged Prussia's actions. From exile in Gmunden, Austria, he appealed in vain for the European great powers to intervene on behalf of Hanover. From 1866, George V maintained the Guelphic Legion at his own expense.

George V died in Paris in June 1878. He was buried in St George's Chapel at Windsor Castle.

The king supported industrial development – in 1856 the "Georgs-Marien-Bergwerks- und Hüttenverein" was founded which was named after him and his wife. The company erected an iron and steel works which gave the city Georgsmarienhütte its name.

By grant dated 15 August 1835, George's arms in right of the United Kingdom were those of his father (being the arms of the United Kingdom, differenced by a label argent of three points, the centre point charged with a fleur-de-lys azure, and each of the other points charged with a cross gules), the whole differenced by a label gules bearing a horse courant argent.[4]