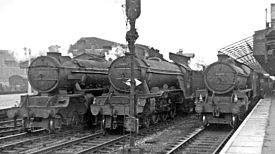 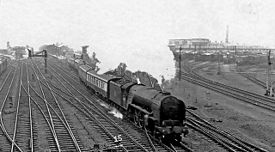 Down Express departing in 1957

Doncaster railway station serves the town of Doncaster, in South Yorkshire, England. It is situated on the East Coast Main Line 156 miles (251 km) north of London Kings Cross, and is about five minutes walk from Doncaster town centre. The station is managed by East Coast. It is a major passenger interchange between the East Coast Main Line, Cross-Country services, and local services running across the North of England.

The station was built in 1849 replacing a temporary structure constructed a year earlier.[1] It was rebuilt in its present form in 1938 and has had several slight modifications since that date.

The station has 8 platforms on two islands. Platforms 1, 3, 4 and 8 take through trains. Platforms 2 and 5 are south-facing bays, and 6 and 7 are north facing bays. A First Class Lounge for passengers with 'First Open' tickets is available on platform 3A.

The station has recently been refurbished and is now directly connected to the new Frenchgate Centre extension in Doncaster town centre. The station now has a new booking office for tickets and information, three new lifts, refurbished staircases and subway. A branch of WH Smiths and several Costa Coffee outlets have also recently opened. Platform 1 is for the East Coast, First Hull Trains and Northern Rail trains.

Whilst all platforms are currently operational, platform 2 is not currently used for any timetabled service.

On 16 March 1951 a derailment occurred south of the station in which 14 passengers were killed and 12 seriously injured.

Seven train operators (or TOCs) call at Doncaster, which is equal to other big stations in the UK. Train operators include the following:

CrossCountry
CrossCountry have dropped most Doncaster to Edinburgh services. They offer an hourly service to Newcastle and Reading with one service per day running through to both Edinburgh Waverley and Guildford.

East Coast
East Coast offers regular direct trains services to London, which can be reached in 85-100 min, depending on the service. Nearly all services call at Doncaster. East Coast also offers services to the North, to cities such as Leeds (terminating services), York, Durham, Newcastle, Edinburgh, Glasgow and Aberdeen. On Sundays, only the Highland Chieftain from London stops at Doncaster en route to Inverness.

Northern Rail
Northern Rail generally offers services from Doncaster to stations within Yorkshire and Lincolnshire, such as Sheffield, Leeds and Lincoln. It provides stopping services, stopping at every station along-route, and 'fast' services, stopping at just the principal stations. It is possible to travel on Northern Rail to Retford from Doncaster, via Sheffield, on a direct train. However, this involves a journey of 80 min. The direct East Coast service takes, on average, just 14 min.

Grand Central
Grand Central Railway offers three trains a day between Bradford Interchange and King's Cross. All services call at Doncaster. South-bound the next stop is King's Cross and northbound it is Pontefract.

There were plans to add platforms 9 and 10 to cope with Eurostar trains but this was cancelled when Eurostar went back on promises to serve parts of Britain outside the South East of England.

In 1973 the station was featured in the first episode of Whatever Happened to the Likely Lads?, entitled Strangers on a Train. It starred James Bolam and Rodney Bewes although only Bolam was featured in location filming at the station, which took place in late 1972.

Although it is not known whereabouts in the station the scenes were placed, signs for Grimsby Town and Scunthorpe are visible behind Bolam.