Manchester Victoria station in Manchester, England is the city's second largest mainline railway station. It is also a Metrolink station, one of eight within the City Zone. It is situated to the north of the city centre on Hunts Bank, close to Manchester Cathedral.

The station serves destinations north and east of Manchester, with some trains to Liverpool (mostly on the original Manchester to Liverpool line). The line from Bury was converted to light-rail operation in the early 1990s when the Metrolink tram system was created, and the trams switch to on-street running once they emerge from Victoria Station. Current plans for Phase 3 of Metrolink involve the conversion of the rail routes from Victoria to Rochdale via Oldham to light rail. Most trains calling at the station are operated by Northern Rail, except during engineering works, when some trains are diverted from Manchester Piccadilly.

In 1838 Samuel Brooks, vice-chairman of the Manchester and Leeds Railway (M&LR) bought land at Hunt's Bank close to the cathedral and presented it to the company for a station to replace the inconveniently located Manchester Oldham Road railway station opened by the company on 3 July 1839. The station was initially a long low single-storey building designed by George Stephenson and completed by John Brogden[1] on 1 January 1844. It was named Victoria by permission of Her Majesty. The long single platform handled M&LR trains to Leeds and elsewhere at its eastern end. The Liverpool and Manchester Railway extended its line from Ordsall, near the original Manchester Liverpool Road railway station, and its trains operated from Victoria's western end from 4 May 1844.[2]

Platforms 11 (left) and 12 (right), looking west towards Manchester Exchange in 1948 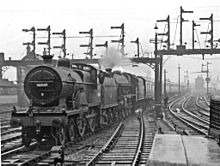 Platform 12, as seen looking north-east from Platform 3 of Manchester Exchange in 1960

A local train waiting to leave for Southport in 1962

By the mid-1840s six railway companies operated from the station connecting Manchester to London, Glasgow, Liverpool, Leeds and Sheffield. Victoria Station came to dominate the Long Millgate area and was one of the biggest passenger stations in Britain.

Victoria was enlarged by William Dawes, who is responsible for most of the remaining facade, in 1909. The enlarged building was erected on land originally consecrated as a burial ground on 1 January 1815 by the Bishop of Chester; this land had been acquired by the Manchester and Leeds Railway in 1844.[3] It eventually boasted 17 platforms. Wealthy commuters travelled here from Blackpool and Southport rather faster than is possible today (e.g. 45 minutes from Southport in 1910, 67 today; and 65 minutes from Blackpool in 1910, 77 today) in specially-constructed club cars hauled by express steam locomotives. These non-stop services were abandoned in the early 1960s.

The Edwardian building has a 160 yards (146 m) facade, which carries an iron and glass canopy bearing the names of the original destinations served, and a tile mural depicting the routes of the Lancashire and Yorkshire Railway, which operated most of the trains from the station between 1847 and 1923, when it became one of the main constituents of the London, Midland and Scottish Railway. The canopies served as a covered waiting area for taxi cabs until they were damaged in the Provisional IRA 1996 bombing. They have been restored. The cast-iron train sheds behind the façade are 700 yards (640 m) long. Initially the station was approached by a wooden footbridge over the River Irk, which has subsequently disappeared beneath culverting alongside the cathedral.

From 1884, Victoria Station was adjacent to Manchester Exchange Station, operated by the rival London and North Western Railway, and, from 1929, a single passenger platform linked the stations; this was the longest passenger platform in Europe at 2,194 feet (669 m). Exchange Station was closed in 1969 and its services were transferred to Victoria. Its site opposite the cathedral is now a car park.

In the early 1970s, as part of the Picc-Vic tunnel project, there were proposals to build an underground station, Victoria Low Level.[4] The project was cancelled and subsequent rail improvements concentrated on surface projects and the introduction of light rail.

Victoria is the main station for the adjacent Manchester Evening News Arena, which was joined to the station between 1992 and 1996 by means of a raft above the through rail platforms. The principal access to the MEN Arena is via stairs on Hunts Bank although there is an entrance from the main station concourse.

The station has a barber's shop, newsagents, coffee bars and buffet. Network Rail aims to lease offices on the first and second floors to businesses. In 2009 the station was identified as one of the ten worst category B interchange stations for its fabric and environment. Victoria was set to receive a £5m share of the £50m 'Better Stations' Network Rail funding for improvements; this was cancelled in the June 2010 budget cuts, but a replacement funding package has since been arranged.[5]

In November 2009, it was announced that Manchester Victoria was officially the worst station in Britain. As a result, the transport secretary, Lord Adonis, announced that, along with nine others, it would receive an urgent injection of £50 million and an emergency rebuilding programme.[6]

It is intended to build new west-facing platforms for terminating services to and from Yorkshire and the Humber. New shops and cafés will be included. After agreeing a £30 million funding package with Manchester City Council and the North West Development Agency, Network Rail will replace the roof, refurbish the station toilets, and install new passenger help points and wind-break shelters on Platforms 3-6.[7] However, as part of cuts announced by the coalition government, a £5 million grant from the Department for Transport was withdrawn, making the project uncertain.[8]

On 16 February 2010 it was reported that Network Rail intended to refurbish Manchester Victoria as part of the Northern Hub improvement proposals. The station will become an interchange for local and regional services throughout the North West of England.[citation needed] In August 2010, Network Rail announced that the refurbishment of Victoria Station would go ahead, despite the government withdrawing £5 million funding from the scheme.[9] 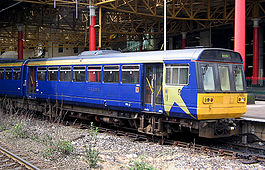 Manchester Victoria is served by a single train operating company, Northern Rail. It is occasionally used by First Transpennine Express and CrossCountry services during engineering works.

Northern Rail operates Class 142 pacers and 150 or 156 Sprinter DMUs on most train services around Manchester, while the Leeds Calder Valley services are usually operated by Class 155 or 158 Sprinter DMUs. The Leeds via Dewsbury services mainly use 3-car Class 144 Monday - Friday, although at weekends this service sees other classes on the route such as a pair of Class 153 DMUs or Class 150 or 155. Because of a shortage of rolling stock, Class 180s are often used on Blackpool services, an example of high-speed trains capable of 125 mph being used on slow stopping services.

Manchester Victoria is used by Transpennine Express as a diversionary route and alternative station when the route through Manchester Piccadilly is unavailable as a result of engineering works. Night services between Manchester Airport and York run via Manchester Victoria, although they do not stop. They then run via Ashton-under-Lyne to rejoin the usual route at Stalybridge, or continue through Rochdale and Hebden Bridge before reaching Huddersfield.

Note that the Monday - Saturday peak 17:06 is a faster Wigan Wallgate service, which calls only at:

In July 2009, it was announced that the line between Manchester and Liverpool (via Earlestown) will be electrified at 25 kV ac (overhead line). Class 319 EMUs will be used on services from Victoria and Piccadilly to Liverpool Lime Street. The project is expected to be completed within four years. 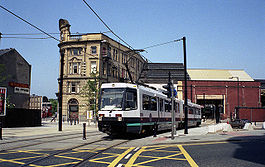 A tram departs from Victoria heading into the city

Manchester Victoria is served by Manchester's Metrolink light rail system, at the northern edge of the City Centre zone, forming part of the Bury Line. Metrolink services run through Victoria to Bury, Altrincham and Piccadilly. Trams enter Victoria station from Shudehill Interchange by crossing Corporation Street and Long Millgate and passing through a specially constructed arch in the station wall. From there they curve right and stop at the Metrolink platforms.

The Metrolink station is at the southern end of Victoria station, near the exits, and occupies the site of the former Bury electric train platforms. The Metrolink station was originally built with three platforms, denoted A, B and C; Platform A, close to the point where the trams enter the station, was used for Bury-bound trams, but is now closed to public use due to leaks in the station roof. Platforms B and C, located on a single island platform further along the tracks, are now used, and passengers must cross the tram lines to reach these platforms.

The Metrolink system was opened in 1992, the result of a long-running project to link the two main rail stations in Manchester, Piccadilly and Victoria, with a rail line running across the city.[10] Previous proposals involving an underground railway were abandoned due to costs, but Greater Manchester Council instead secured funding for a light rail solution. The original system was based on the conversion of selected British Rail lines to light rail operation, linked by on-street tram tracks. The Bury line to Victoria opened as a Metrolink line in 1992, replacing former heavy rail services with Metrolink trams.

As part of the Phase 3 of the Metrolink expansion project, it is planned to extend the tram network to Rochdale by converting most of the Oldham Loop Line to light rail operation. The conversion of the line will involve electrification of the route and replacing diesel Pacer and Sprinter train services with the new generation of Flexity Swift trams. The Rochdale line expected to come into service around 2011/2012.[11] Further expansion of the line will see the addition of a Metrolink branch via the old branch line via Oldham Central, the extension of the northern end of the line via a tram line into Rochdale Town Centre and a second city crossing via Exchange Square to St Peter's Square which would require additional platforms to be built to more easily accommodate terminating services.