Dore and Totley railway station (named Dore railway station from 1969 until 2008) is a small, one platform railway halt near the Sheffield areas of Dore and Totley in South Yorkshire, England. The station is served by the Northern Rail service between Sheffield and Manchester, East Midlands Trains (EMT) service from Liverpool to Norwich and the First TransPennine Express (TPE) service between Manchester and Cleethorpes, both running via the Hope Valley Line.

The station opened, for passengers only, as Dore and Totley station on 1 February 1872 (at a building cost of £1517 and £450 for 2 acres (8,100 m2) of land) on the then two year-old Midland Main Line extension from Chesterfield to Sheffield, and was initially served by the local services on this line. The station was then served by six or seven weekday trains and three on Sundays.

In 1894 the station became the junction for the new Dore and Chinley line (now the Hope Valley Line). Dore & Totley Station Junction was at the south end of the station and the signal box stood in the angle between the Chesterfield and Chinley lines. [1]

Between 1901 and 1902 the line between Sheffield station and Dore was widened; the original twin tracks continued to be used by traffic for the Dore and Chinley line and two new tracks were built to the east of this for traffic on the main line to Chesterfield.[2] The original southbound platform was converted to an island platform and a new platform for trains to Chesterfield built to the east. The line from Chesterfield was slewed into its present course to serve the new platforms. A new Dore and Totley Station Junction was made to the north of the station.

On 9 October 1907, a Sheffield to Birmingham and Bristol express train ran foul of the points at the station. One of the locomotives hit the platform and overturned. The driver and the second man were thrown from the cab but survived, and the passenger coaches fortunately stayed upright with no passengers injured.

The station was closed to main line traffic and become an unstaffed halt in 1969. Subsequently, the island and eastern platforms were demolished in the 1980s. Mainline services from the South therefore can no longer stop at the station and the Hope Valley Line now runs single-track (it was singled in March 1985) through the station, with trains in both directions stopping at the one remaining platform. The photograph (right) is taken from the South and shows the remaining platform on the Hope Valley line and none on the main line.

The single track section through the station has become a significant bottleneck in capacity terms in recent years (as mentioned in the recent Yorkshire & Humber RUS) and Network Rail is hoping to address this by re-doubling the section concerned and building a second platform (subject to funding being obtained [3]). South Yorkshire PTE has also been lobbying for this problem to be addressed (as noted in its 2006 Rail Strategy document[4]).

The station site had previously been occupied by the Walk Mill, a water-powered mill in operation from the 1280s onwards was used by the monks of Beauchief Abbey to cleanse and thicken cloth.

The name "Dore and Totley" was restored in April 2008 when the station received new Northern Rail-branded running in boards. Plans are being drawn up to double the size of the station by 2014. A additional platform, new DDA compliant footbridge, and 100 space car-park are to be provided.[5]

The station has a basic two-hourly service in each direction on weekdays (increasing to hourly on Saturdays), augmented by a number of peak-hour stops by longer distance trains on the South Trans-Pennine and Liverpool - Norwich routes. There is also a two-hourly service (with some additional afternoon trains) on Sundays. During the day; TPE express services and EMT non-stopping services go through at high speed whilst EMT London Services and Cross Country services pass close by on the north-south Midland Main Line. 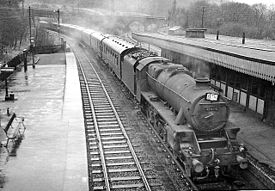