Death Valley Junction (formerly, Amargosa[1] and '"Death Valley'"[3]) is a tiny Mojave Desert community in unincorporated Inyo County, California, at the intersection of SR 190 and SR 127, just east of Death Valley National Park. The zip code is 92328, the elevation is 2,041 ft (622 m), and the population fewer than 20. The city limits sign reports a population of 4. The U.S. Geological Survey lists a historic variant name of Amargosa for the community which is shown as the primary name on an official State of Nevada map from 1971. Its existence and name are official with a USGS feature ID of 1656477. The default format for wired phone numbers in this community is (760) 852-xxxx.

Death Valley Junction is home to the Amargosa Opera House and Hotel, where resident Marta Becket has staged dance and mime shows since the late 1960s. The hotel is operating and the shows continue at the opera house, but beyond these maintained areas, the town is in a state of disrepair. There are no gas stations, and only one restaurant. The single restaurant, T&T Cafe, is part of the Amargosa Opera House and Hotel, but is not run by the hotel staff.

The community's location, 27 miles (43 km) east-southeast of Furnace Creek Inn,[3] on the east side of Death Valley is south of Nevada's Amargosa Valley and near Ash Meadows National Wildlife Refuge. South on SR127 is the town of Shoshone, California. The closest straight-line distance to the Nevada state line is roughly five miles northeast.

Government documents show an effort by the Timbisha Shoshone tribal government to acquire about 7,200 acres (29 km2) in the area during 1999 to 2000. This includes areas for residences and the official federal sanction to use some government lands for traditional ceremonies. It's unclear if these efforts, which were documented in the Congressional Record, succeeded.

In 1914 the Death Valley Railroad started operating between Ryan, CA and Death Valley Junction. It carried borax until 1928, when operations ceased. The name of the town was changed from Amargosa ("bitter water" in a Paiute language) to Death Valley Junction. From 1923 to 1925 the Pacific Coast Borax Company constructed buildings in the town, hiring architect Alexander Hamilton McCulloch to design a Spanish Colonial Revival whistle stop centered at the hotel, theater and office complex building, now known as the Amargosa Opera House and Hotel. The town began to decline in the mid twentieth century, until 1967 when dancer and actress Marta Becket, with help from benefactors, leased, then purchased the hotel and theater complex. The Amargosa is now owned by a non-profit organization.[citation needed]

In 1980 the town was included in the National Register of Historic Places as the "Death Valley Junction Historic District."

When the Death Valley Railroad was established in 1914, it used 3.19 miles (5.13 km) of tracks belonging to the Tonopah and Tidewater Railroad east-southeast of Death Valley Junction to Horton.[3] 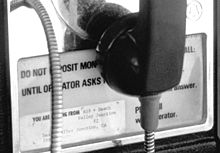 Local wired telephones were manual telephone service until the 1980s. To reach a phone in Death Valley Junction when the area was under manual service required dialing the operator and asking for Death Valley Junction, California, Toll Station (and the one-digit number). Placing an outbound call required lifting the receiver and waiting for an operator. The operator who answered was in Los Angeles. The area is now in area code 760.

At right is the bottom instruction card of Death Valley Junction #2, a non-dial Western Electric 1A1 coin collector located at the Amagosa Opera House. Picture was taken in the late 1970s.