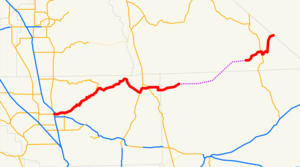 State Route 178 (SR 178) is a route that exists in two constructed segments. The gap in between segments is connected by various local roads and State Route 190 through .

The first segment starts at State Route 99 just west of Downtown Bakersfield. The road continues as 24th street, but then splits at B St. utilizing 24th street as its westbound usage, and 23rd St. as its eastbound through the eastern part of Downtown Bakersfield. 178 then becomes a freeway as it departs Bakersfield. The freeway ends about convert|5|mi|km east of Downtown and becomes a two-lane conventional highway that ascends the lower Sierra Nevada Mountains on its way to . Just south of Lake Isabella, the road briefly again becomes a divided limited access freeway, but later converts back to a two lane road at the at-grade junction with Lake Isabella Blvd. The road winds a little bit until it ascends to , an elevation of over convert|5000|ft|m. The highway then descends from the mountains to its junction with State Route 14. It then proceeds eastward across US 395 into the town of Ridgecrest, CA. The constructed highway ends at the turnoff for the Trona Pinnacles National Natural Landmark.

The second segment resumes four miles (6 km) west of Salisberry Pass in the southeasterly part of in Inyo County at what had been the former boundary of Death Valley National Monument until 1994. It then meets up with State Route 127. 178 then branches northward from 127 to the California-Nevada State Line. In Nevada, the roadway continues as State Route 372 ending at State Route 160 near the center of Pahrump in Nye County. Plans to connect the two constructed segments in California are unlikely due to the would-be link's passage through .