This article is about a place in the United States. For other uses, see Zabriskie Point (disambiguation).

Zabriskie Point is a part of Amargosa Range located in east of Death Valley in Death Valley National Park in the United States noted for its erosional landscape. It is composed of sediments from Furnace Creek Lake, which dried up 5 million years ago — long before Death Valley came into existence. 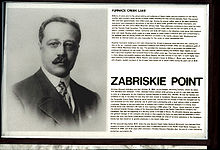 Portrait of Christian Brevoort Zabriskie, on an interpretive sign at the Zabriskie Point site in Death Valley National Park

The location was named after Christian Brevoort Zabriskie, vice-president and general manager of the Pacific Coast Borax Company in the early 20th century. The company's famous, iconic twenty-mule teams were used to transport borax from its mining operations in Death Valley. 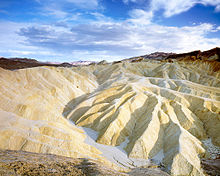 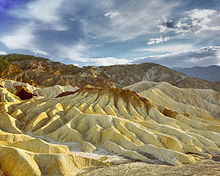 Millions of years prior to the actual sinking and widening of Death Valley and the existence of Lake Manly (see Geology of the Death Valley area), another lake covered a large portion of Death Valley including the area around Zabriskie Point. This ancient lake began forming approximately nine million years ago. During several million years of the lake's existence, sediments were collecting at the bottom in the form of saline muds, gravels from nearby mountains, and ashfalls from the then-active Black Mountain volcanic field. These sediments combined to form what we today call the Furnace Creek Formation. The climate along Furnace Creek Lake was dry, but not nearly as dry as in the present. Camels, mastodons, horses, carnivores, and birds left tracks in the lakeshore muds, along with fossilized grass and reeds. Borates, which made up a large portion of Death Valley's historical past were concentrated in the lakebeds from hot spring waters and alteration of rhyolite in the nearby volcanic field. Weathering and alteration by thermal waters are also responsible for the variety of colors represented there. 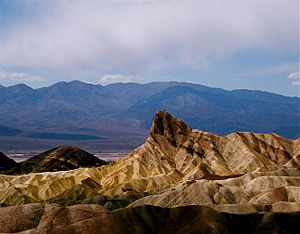 Regional mountains building to the west influenced the climate to become more and more arid, causing the lake to dry up, and creating a dry lake. Subsequent widening and sinking of Death Valley and the additional uplift of today's Black Mountains tilted the area. This provided the necessary relief to accomplish the erosion that produced the badlands we see today. The dark-colored material capping the badland ridges (to the left in the panoramic photograph) is lava from eruptions that occurred three to five million years ago. This hard lava cap has retarded erosion in many places and possibly explains why Manly Beacon, the high outcrop to the right, is much higher than other portion of the badlands. Manly Beacon was named in honor of William L. Manly, who along with John Rogers, guided members of the ill-fated Forty-niners out of Death Valley during the gold rush of 1849.

The primary source of borate minerals gathered from Death Valley's playas is Furnace Creek Formation.[1] The Formation is made up of over 5000 feet (1500 m) of mudstone, siltstone, and conglomerate. The borates were concentrated in these lakebeds from hot spring waters and altered rhyolite from nearby volcanic fields.

Zabriskie Point is also the name of a 1970 movie by Italian director Michelangelo Antonioni, notable for its soundtrack featuring music by British band Pink Floyd and Jerry Garcia.

The philosopher Michel Foucault called his 1975 acid trip at Zabriskie Point the greatest experience of his life.[2]

This location is featured prominently on the cover of U2's album The Joshua Tree.

This location was used to represent the surface of Mars in the film Robinson Crusoe on Mars.

Zabriskie Point is the name of Radio Massacre International's album released in 2000.

Zabriskie Point is a Soviet Code for a location on the Surface of Moon in Omon Ra, a dystopian thriller novel by Pelevin

There is another place called Zabriskie Point near Mosquera, Cundinamarca, a small town 30 km west from Bogotá, Colombia. This is a desertic area that presents the same erosional patterns seen at Death Valley, and it is frequently used to extract sand and sandstone widely used at construction. The dry weather and the landscape, very alike to the place at Death Valley, gave name to this other Zabriskie Point.