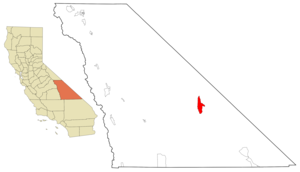 mapsize = 250x200px
map_caption = Location in Inyo County and the state of

Furnace Creek is a (CDP) in Inyo County, , . The was 31 at the 2000 census. The elevation of the village is convert|179|ft|m below sea level, making it the lowest census-designated place in the .

At Furnace Creek is the headquarters of , as well as two of its major tourist facilities, the . The course attached to the Ranch is the lowest in the world, at convert|214|ft|m below sea level. Most lodging is closed in the summer, when temperatures in the vicinity can surpass 125 degrees Fahrenheit (52 degrees Celsius). There is a visitor's center and a gas station in Furnace Creek. The village is surrounded by a number of campgrounds.

is located about 3/4 mile west of the park headquarters.

Furnace Creek was formerly the base of operations for the .

The Indians have lived in the area for centuries. They provided much of the labor to construct and maintain the facilities at Furnace Creek, and continue to comprise most of the permanent population.

Springs in the created a natural at Furnace Creek, which has subsequently dwindled due to diversion of this water to support the village. [ [http://wrgis.wr.usgs.gov/docs/parks/deva/ftfur1.html "Furnace Creek: Focus on Water" - US Geological Survey report] ]

There were 15 households out of which 26.7% had children under the age of 18 living with them, 33.3% were married couples living together, 20.0% had a female householder with no husband present, and 40.0% were non-families. 40.0% of all households were made up of individuals and 13.3% had someone living alone who was 65 years of age or older. The average household size was 2.07 and the average family size was 2.33.