Founded in 1889, the university is academically divided into five colleges: Agriculture, Forestry and Life Sciences; Architecture, Arts and Humanities; Business and Behavioral Sciences; Engineering and Science; and Health, Education and Human Development.[6] 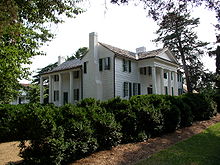 Fort Hill was the home of John C. Calhoun and later Thomas Green Clemson and is located at the center of the university campus.

Thomas Green Clemson, the university's founder, came to the foothills of South Carolina in 1838, when he married Anna Maria Calhoun, daughter of John C. Calhoun, a South Carolina statesman and seventh U.S. Vice President.[9] When Clemson died on April 6, 1888, he left most of his estate, which he inherited from his wife, in his will to be used to establish a college that would teach scientific agriculture and the mechanical arts to South Carolinians.[10] His decision was largely influenced by South Carolina Governor Benjamin Tillman. Tillman strongly lobbied the South Carolina General Assembly to create the school as an agricultural institution for the state and in the end, the resolution to accept Clemson's gift and create the institution passed by only one vote.

Clemson Agricultural College formally opened in July 1893 with an initial enrollment of 446. From its beginning, the college was an all-white male military school. The school remained this way until 1955 when it changed to "civilian" status for students and became a coeducational institution.

The Carnegie Foundation for the Advancement of Teaching classifies the university as more selective,[14] since the university admitted less than fifty-five percent of those who applied to be freshmen in 2006.[15][16] When admitting freshmen, the university places emphasis on the rigor of high-school study and scores on standardized tests, SAT or ACT. The university also considers class rank, extracurricular activities, and an optional personal statement. The average incoming freshman had a combined SAT score of 1220 and a high-school weighted grade-point average (GPA) of 3.99 in 2010.[17] In 2008, admission was the most competitive in university history.

It had over 15,000 applications for its freshman class of approximately 2,800 students. It was especially competitive for out-of-state students in that it is a state-supported institution. Of those 15,000+ applications, over 10,000 were from outside of South Carolina; however, a little over 1,000 freshmen from other states gained admission.[18]

Cooper Library and the Reflection Pool - in addition to its aesthetic appeal, the 1,960,000 gallon reflecting pool also serves as a heat exchange for the cooling systems of several academic buildings.[25]

The university has undertaken an endeavor to become a "Top 20" public institution, undergoing a process of enhancing its graduate programs while continuing to emphasize the quality of the undergraduate experience. It has steadily moved up the rankings for public universities from 34,[26] to 30,[27] to 27,[28] to 22[28] in 2005, 2006, 2007, and 2008 respectively: according to the U.S. News & World Report. For 2011, US News & World Report ranked Clemson as the 23rd best public national university in the country.[28] For the year 2012, Clemson ranks number 25th for top public schools in the country according to U.S. News & World Report.[29]

As part of its push to enhance graduate-level education, several new Ph.D. programs have been created including interdisciplinary doctoral programs in Rhetoric and Planning, Design, and the Built Environment (formerly Environmental Design and Planning). Also noteworthy is a new master's degree in historic preservation, jointly offered in collaboration with the College of Charleston.

The university's currently most ambitious academic and research endeavor is the Clemson University International Center for Automotive Research (CU-ICAR).[30] The CU-ICAR is a 250-acre (101 ha) automotive and motorsports research campus located in nearby Greenville, South Carolina. ICAR will include a graduate school offering master's and doctoral degrees in automotive engineering, and offering programs focused on systems integration. The campus also includes an Information Technology Research Center being developed by BMW. BMW, Microsoft, IBM, Bosch, The Timken Company and Michelin are all major corporate partners of the CU-ICAR. Private-sector companies that have committed so far to establishing offices and/or facilities on the campus include the Society of Automotive Engineers and Timken. Plans for the campus also include a full-scale, four-vehicle capacity rolling-road model wind tunnel.

In 2004 the Restoration Institute was founded. Its mission is to "advance knowledge in integrative approaches to the restoration of historic, ecological, and urban infrastructure resources." The institute is located in North Charleston and subsume the Hunley Commission that is currently undertaking the stabilization of the H.L. Hunley, the world's first submarine to sink a ship.

In 2011, The Princeton Review ranked Clemson #1 for town-gown relations are great, #2 for happiest students, #2 for jock schools, #3 for everyone plays intramural sports, #8 for students pack the stadiums, and #9 for best career services.[31]

It has been a university tradition dating from September 24, 1977, for the school's fans to spend two-dollar bills on away-game trips. This began when the school played Georgia Tech "for the last time" as Tech refused to travel to Clemson. Of the seventeen games played between Tech and Clemson between 1953 and 1977, only once, in 1974, did the Georgia Tech Yellow Jackets deign to come to Death Valley (Memorial Stadium). To show the Atlanta business community how much money Clemson fans contributed to the local economy which would not be coming to town anymore, Tiger fans spent vast quantities of two-dollar bills, many of them stamped with "Tiger Paws". This was the start of Clemson's two-dollar bill tradition, which was very popular in the 1980s and 1990s, but has waned since then.[32][unreliable source?][33]

The university's fight song is the jazz standard, the "Tiger Rag", played by the Clemson University Tiger Band.[34] 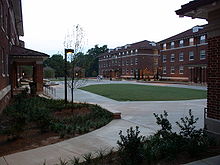 The university's fraternities and sororities system (or Greek system) is somewhat different from other large universities in the southern U.S. in that there are no Greek houses on campus as interfraternity activity did not begin until 1970 following the abolishing of the military cadre requirements at the university. There are residence halls designated for fraternities and sororities, but there are no traditional Greek houses on campus. However, there are a few fraternity houses off campus not too far from the college.The Fraternity Quad on campus (consisting of seven fraternity and sorority halls) is certified by the U.S. Green Building Council's Leadership in Energy and Environmental Design (LEED) program. The remaining sorority's on-campus housing is located on the other end of campus in what is commonly referred to as "the horseshoe" in Smith and Barnett Halls.

As of the 2010-2011 school year there are twenty IFC Fraternities, eleven NPC Sororities, and nine NPHC Chapters, which make up approximately 20 percent of the undergraduate student body.[37] In the Spring of 2011, there were 3,370 students involved in greek life, which is about 23% of the 14,531 undergraduate students. Also, the mean GPA of each sorority was above the all university mean.[38] 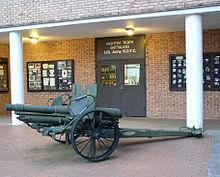 Although the university became a coeducational civilian institution in 1955, it still maintains an active military presence. The university is home to detachments for U.S. Army and U.S. Air Force Reserve Officers' Training Corps (ROTC) as well as a host school for the U.S. Marine Corps PLC program adjacent to the Semper Fi Society.

The university's AAS squadron was selected to be home of Arnold Air Society's National Headquarters for the 2005–2006 year, and again for the 2006–2007 year. This is the first time is AAS's history that any university has served as national headquarters two years in a row.[40]

The university has also developed a group of Marines and Marine Officer Candidates within an organization called the Semper Fi Society. The society is not associated with the ROTC, but can lead to a commission into the U.S. Marine Corps via the Platoon Leaders Course program.