Brian Patrick Dawkins (born October 13, 1973 in Jacksonville, Florida) is an American football safety for the Denver Broncos of the National Football League. He was drafted by the Philadelphia Eagles in the second round of the 1996 NFL Draft. He played college football at Clemson.

An eight-time Pro Bowl selection, Dawkins is a member of the Philadelphia Eagles 75th Anniversary Team, the NFL 2000s All-Decade Team and the 20/20 Club (20 sacks, 20 interceptions).

A three-year starter at free safety for Clemson University, Dawkins finished his career with 247 tackles and 11 interceptions. He was a 2nd team All-American selection as a senior when his team-high six interceptions tied him for the conference lead. He was named the first-team strong safety on Clemson's all-centennial team in 1995 and was selected to their Athletic Hall of Fame in 2009.[1][2] 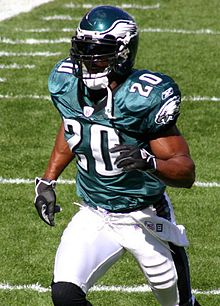 Brian Dawkins during his tenure with the Eagles.

Dawkins was drafted in the second round of the 1996 NFL Draft by the Philadelphia Eagles. As a rookie in 1996, he replaced Eric Zomalt as the starting free safety,[3] remaining in that position throughout his 13 year career in Philadelphia. In 1996, he started 13 of the 14 games he played in, recording 75 tackles, a sack, and three interceptions. Dawkins' rookie season would also see the trio of himself, Bobby Taylor and Troy Vincent form in the Eagles secondary that formed the core of the Eagles defense through 2003, and was instrumental in placing the Eagles among the best defenses in the league.

Dawkins made his first of seven Pro Bowls in 1999, earning a reputation as a hard-hitting ball-hawk.[4] His emergence as one of the premier safties in the NFL earned him the role of Eagles' defensive captain, and a mainstay on the Eagles. In fact, Allen Iverson's departure from the Philadelphia 76ers in 2006 made Dawkins the longest-tenured athlete in Philadelphia sports.

In 2002 in a game versus the Houston Texans he became the first player in NFL history to record a sack, an interception, forced fumble, and touchdown reception in a single game. This performance, as well as his consistent Pro Bowl-caliber play, earned him a seven-year contract extension at the conclusion of the 2002 season.[5]

In 2004, after three consecutive NFC Championship defeats, the Eagles finally advanced to the Super Bowl with a win over the Atlanta Falcons; the Eagles ultimately would lose to the New England Patriots in the Super Bowl, 24-21. It was Dawkins' first and only Super Bowl appearance.

During the 2008 season, he became the tenth member of the 20/20 Club and broke the Eagles record for games played surpassing Harold Carmichael who had 180. The 2008 season was a memorable one for Dawkins and the Eagles, as the 5-5-1 team went on a 4-1 surge to make an improbable run to the NFC Championship game where they lost to the Arizona Cardinals, in what turned out to be Dawkins' final game as an Eagle.

He finished his career with the Eagles starting 182 of 183 games, recording 898 tackles, 34 interceptions, and 21 sacks.

On February 28, 2009, Dawkins signed a five-year, $17 million contract with the Denver Broncos. He joined another teammate, Correll Buckhalter, who also signed with the Broncos. The contract includes $7.2 million guaranteed and a termination clause that says Dawkins can opt out of the contract after two years and receive an extra $1.8 million, virtually making the contract for two years and $9 million. Dawkins can also earn an additional $10 million in performance incentives.[6][7][8]

In early 2007, Dawkins and his wife gave birth to twin daughters, Chonni and Cionni.[9] Both daughters were born two months premature, but are currently healthy. Dawkins, with his wife, Connie, also have two other children, Brian Jr. and Brionni.[10]

While with the Eagles, Dawkins had been a resident of Voorhees Township, New Jersey, but put his house there up for sale after joining the Broncos.[11]

After Dawkins signed with the Broncos in 2009, Dan Leone, an Eagles employee who was a gate chief at Lincoln Financial Field was fired by the Eagles after Leone posted messages on his Facebook page expressing his disappointment in the team. Dawkins announced that he would give his two allotted game tickets for the 2009 Eagles-Broncos game to Leone, saying, "I felt it would be a good thing, to reach out to that individual and just let him know how much I appreciate it."[12]