A nuclear-free zone is an area where nuclear weapons (see nuclear-weapon-free zone) and nuclear power are banned. The specific ramifications of these depend on the locale in question.

In reality, nuclear weapons have freely traversed through, nearby, or above "nuclear-free" zones via military transport without the knowledge or attention of local authorities.

Many local authorities worldwide have declared themselves "nuclear-free". However, this label is largely symbolic, since most local authorities would be powerless to stop the construction of a nuclear plant if one was planned for the area. New Zealand's status as a nuclear-free zone is not symbolic but enshrined in the nation's legislation. New Zealand was the first Western-allied nation to legislate towards a nuclear free zone, effectively renouncing the nuclear deterrent.[1]

Austria is a nuclear free zone, when a nuclear power station was built during the 1970s at Zwentendorf, Austria, start-up was prevented by a popular vote in 1978, thus creating a nuclear-free state.

Nuclear weapons were introduced into South Asia in the late 1970s with their surprise detonation at Pokhran by India near their border with Pakistan.[3]

Though Japan does make widespread use of nuclear power plants, it holds to the tenets that nuclear weapons shall not be manufactured in, possessed by, or allowed entry into Japan. These tenets, known as the Three Non-Nuclear Principles, were first stated by Prime Minister Eisaku Satō in 1967, and were adopted as a parliamentary resolution in 1971, though they have never formally been entered into law.

These statements continue today to reflect the attitudes of both government and the general public, who remain staunchly opposed to the manufacture or use of nuclear weapons. The Japan Self-Defense Forces have never made any attempt to manufacture or otherwise obtain nuclear arms, and no nuclear weapons are known to have been introduced into the Japanese Home Islands since the end of World War II. However, while the United States does not maintain nuclear bases within its military installations on the Home Islands, it is believed to have done so in Okinawa, which remained under direct US control for twenty years following the end of the Occupation in 1952.

Italy is a nuclear free zone since the Italian nuclear power referendum of November 1987. Following center-right parties' victory in the 2008 election, Italy's industry minister announced that the government scheduled the construction to start the first new Italian nuclear-powered plant by 2013. The announced project was paused in March 2011, after the Japanese earthquake, and scrapped after a referendum on 12-13 June 2011.

The Act prohibits "entry into the internal waters of New Zealand 12 miles (22.2 km) radius by any ship whose propulsion is wholly or partly dependent on nuclear power" and bans the dumping of radioactive waste within the nuclear-free zone, as well as prohibiting any New Zealand citizen or resident "to manufacture, acquire, possess, or have any control over any nuclear explosive device."[5][6] Combined with the firm policy of the United States to "neither confirm nor deny" whether particular naval vessels carry nuclear weapons, the Act effectively bars these ships from entering New Zealand waters.[7]

New Zealand's security treaty with the United States, ANZUS, did not mention nuclear deterrence and did not require unconditional port access. However, after New Zealand refused entry to USS Buchanan, the United States government suspended its ANZUS obligations to New Zealand, seeing New Zealand's effective rejection of United States Navy vessels as voiding the treaty. The Lange Labour government did not see their stance as incompatible with the treaty and sought a compromise for over two years before passing the Act.[7] Support for the non-nuclear policy was bolstered by the perceived over-reaction of the United States and by the sinking of the Rainbow Warrior by French spies while docked in Auckland. According to some commentators, the legislation was a milestone in New Zealand's development as a nation and seen as an important act of sovereignty, self-determination and cultural identity.[8][9] New Zealand’s three decade anti-nuclear campaign is the only successful movement of its type in the world which resulted in the nation's nuclear-free zone status being enshrined in legislation.[10]

The Nuclear Free Zone Movement in the United Kingdom was very strong in early 1980s, up to 200 local authorities including County councils, District councils and City councils such as the Greater London Council (GLC) (before its abolition) declared themselves to be 'nuclear free'. The first 'Nuclear Free Zone' in the UK was Manchester City Council in 1980 - this still exists to this day. Wales became 'nuclear free' on 23 February 1982 after Clwyd County Council declared itself 'nuclear free' and the Nuclear Free Wales Declaration was made. This policy was legally underpinned by Section 137 of the Local Government Act, which allowed local authorities to spend a small amount on whatever members considered was in the interest of their area or a part of their area.

UK nuclear-free local authorities refused to take part in civil defence exercises relating to nuclear war, which they thought were futile. The non-cooperation of the NFZ authorities was the main reason for the cancellation of the national 'Hard Rock' civil defence exercise in July 1982. In England and Wales 24 of the 54 County Councils refused to participate and seven more co-operated only in a half-hearted way.[12] This has been seen as a victory for the British Peace movement against the policies of Margaret Thatcher. Generally, NFZs were predominantly Labour Party controlled Councils but Liberal Party and even a few Conservative Party Councillors were often active in this respect too. 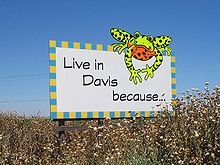 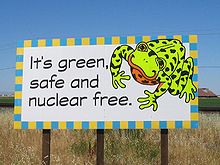 A pair of billboards in Davis, California advertising its nuclear-free policy.

A number of towns, cities and counties in the United States established themselves as Nuclear-Free Zones in the 1980s and 1990s. The first was the tiny town of Garrett Park, Maryland, which attracted world wide attention with its referendum in May, 1982. The following year, Takoma Park, Maryland, was officially declared a nuclear-free zone in 1983 by then-mayor Sam Abbott. A citizen committee of the local city council continues to monitor city contracts. The city cannot hold contracts with any company associated with any aspect of nuclear weapons without a waiver from the citizen committee. In September 2005, Takoma Park took a stand against the transportation of high-level nuclear waste through the City. It voted to amend its Nuclear-Free Zone Ordinance to give its citizen committee responsibility to collect information and from this information and from consultations with individuals and organizations involved in the transportation of high-level nuclear waste, to advise the City on how to promote the safety and welfare of its citizens from harmful exposure to high-level nuclear waste. For more on Takoma Park's nuclear-free history see: http://www.takomaparkmd.gov/committees/nfz/nftpc.htm.

Another well-known nuclear-free community is Berkeley, California, whose citizens passed the Nuclear Free Berkeley Act in 1986 which allows the city to levy fines for nuclear weapons-related activity and to boycott companies involved in the United States nuclear infrastructure. The City of Berkeley has posted signs at each of its borders proclaiming its nuclear free status, which specifies possible fines for such activities within its borders. However, the University of California, Berkeley is deeply involved in the history of nuclear weapons, and the University of California system until recently managed operations at Los Alamos National Laboratory, a U.S. nuclear weapons design laboratory, and continues to manage the Lawrence Livermore National Laboratory. As well, at the time of the passage of the act, the University operated a nuclear reactor for research purposes, which it continued to operate after the act went into effect. However, The University of California, as a state institution, is not subject to Berkeley's municipal regulations (including the ban). Berkeley also has major freeway and train lines which are used in transporting nuclear materials.

On November 14, 1984 the Davis, California City Council declared the city to be a nuclear-free zone.[13] Davis has major freeway and train arteries running through it which are used for transporting nuclear materials. The University of California, with a campus at Davis, runs a research reactor at the nearby former McClellan Air Force Base, as well as workers who are involved with Lawrence Livermore National Laboratory.

On November 8, 1988 the city of Oakland, California passed "Measure T" with 57% of the vote, making that city a nuclear free zone. Under Ordinance No. 11062 CMS then passed on December 6, 1988, the city is restricted from doing business with "any entity knowingly engaged in nuclear weapons work and any of its agents, subsidiaries or affiliates which are engaged in nuclear weapons work."[14] The measure was invalidated in federal court, on the grounds that it interfered with the Federal Government's constitutional authority over national defense and atomic energy.[15][16] The issue being Oakland is a major port, and like Berkeley, and Davis, has major freeway and train arteries running through it. In 1992, the Oakland City Council unanimously reinstated modified elements of the older ordinance, reportedly bringing the total number of Nuclear Free Zones in the United States at that time to 188, with a total population of over 17 million in 27 states.[17]

Other cities, counties, and other governments within the United States passing nuclear free zone ordinances and the date of adoption, when known: