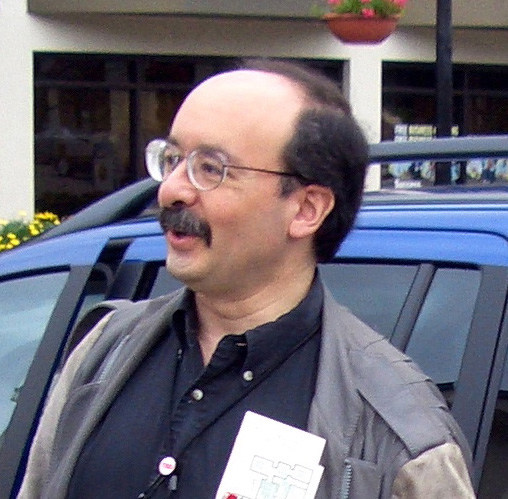 Amory Bloch Lovins (born in ) is Chairman and Chief Scientist of the , a recipient (1993), and author and co-author of many books on and .

Lovins has worked professionally as an and an advocate for a "" for the and other nations. He has promoted energy-use and energy-production concepts based on conservation, efficiency, the use of renewable sources of energy, and on generation of energy at or near the site where the energy is actually used. His works include "", "Factor Four" with and , and "" with and . In the 1990s, his work with the Rocky Mountain Institute included the design of an ultra-efficient automobile, the .

Lovins has provided expert testimony in eight countries and more than 20 US states, briefed 19 heads of state, and published 29 books.

= Early history and personal life = Lovins spent much of his youth in and in . In 1964, Lovins entered . After two years there, he transferred to Magdalen College, , where he studied experimental physics. He became a Junior Research Fellow in Oxford’s , where he studied for two years and earned a master of arts (M.A.). He has received many s recognizing his work.

In 1979 he married L. Hunter Sheldon, a lawyer, forester, and social scientist. Hunter received her undergraduate degree in and political studies from , and her J.D. from Loyola University's School of Law. They separated in 1989 and divorced in 1999. [ [http://sierraactivist.org/article.php?sid=41667 Iconoclast Gets Consultant Fees To Tell Big Oil It's Fading Fast] ]

Friends of the Earth

It was during his days in the UK that Lovin's career as a writer began. Having become a devotee of , Lovins left academia. In 1971 he wrote about the endangered Welsh park in a book commissioned by , president of the environmental organization . Lovins spent several years as British Representative for Friends of the Earth. He wrote a number of other books published by FOE. During this time his interests settled specifically into the area of resource policy, and most especially, energy policy. An essay that he originally penned as a U.N. paper grew into his first book concerned with energy, "World Energy Strategies". His next major work was co-authored with John H. Price and titled "Non-Nuclear Futures".

After returning to the United States, Lovins guided mountaineering trips in the White Mountains of . The shock of the helped create an audience for his ideas, and he appealed to this new audience with the publication of his 10,000-word essay "Energy Strategy: The Road Not Taken?" published in "Foreign Affairs", in October 1976.

Lovins described the "hard energy path" as involving inefficient liquid-fuel automotive transport and centralized electricity-generating facilities. He saw these as giant facilities, often burning fossil fuels (e.g., or ) or harnessing a fission reaction, that were greatly complicated by electricity wastage and loss. The "" which he wholly preferred involves efficient use of energy, diversity of energy production methods (and matched in scale and quality to end uses), and special reliance on "." Soft energy technologies are those based on solar, wind, s, , etc. For Lovins, large-scale electricity production facilities had an important place, but it was a place that they were already filling; in general, more would not be needed. One of his main concerns, was the danger of committing to to meet a society's energy needs.

By 1978 Lovins had published six books, consulted widely, and was active in energy affairs in some 15 countries, as synthesist and lobbyist. In 1982, he and his wife, Hunter, founded the , based in . Together with a group of colleagues, the Lovinses fostered efficient resource use and policy development that they believed would promote global security.

At RMI's headquarters, in Colorado, the south-facing building complex is so energy-efficient that, even with local -40° winter temperatures, the building interiors can maintain a comfortable temperature solely from the sunlight admitted plus the body heat of the people who work there. The environment can actually nurture semi-tropical and tropical indoor plants.

Working with many specialists, Lovins's more recent work at RMI has focused on efforts to transform sectors including the automobile (they designed a hydrogen-powered "" [ [http://www.rmi.org/sitepages/pid191.php What is a Hypercar® Vehicle?] ] to provide an example to Detroit), electricity, water, semiconductor, and real estate.

RMI has grown into a broad-based institution with more than 60 staff and an annual budget of some $8 million.

Amory Lovins has received many honorary doctorates and was elected a Fellow of the American Association for the Advancement of Science in 1984. He has received the , the ("Alternative Nobel"), and the Nissan, Mitchell, Heinz, and Lindbergh awards. He is also the recipient of the World Technology and "Time" Hero for the Planet awards, the Benjamin Franklin and Happold Medals, and the Shingo, Mitchell, and Onassis Prizes. He has also received a and is an honorary member of the (AIA).

Books which are authored or co-authored by Amory Lovins include: