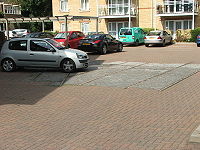 Maidstone Corporation Tramways began operation on 14 July 1904 with the introduction of a service to Barming, supplemented by routes to Loose and Tovil by 1907.[2] The Barming trams were replaced by trolleybuses in 1928,[2] and the Loose trams replaced in 1930.[2] The Tovil tram was replaced by buses in 1929.[3] The Maidstone trolleybus system was expanded with development of new housing until 1963, when the decision was made to convert to buses. The last trolleybuses ran on 15 April 1967.[3]

The tramway's main depot with its offices and sheds were located on the north side of Tonbridge Road, about 50 metres east of its junction with Queens Road.[2] These premises were subsequently used by trolleybuses.[2] As of 2009 the site had become a residential development named the Coach Yard, but some of the original tramway tracks and cobbles were still visible in a preserved central section of its accessway and car park. A smaller tramshed (capacity 4 trams) was located in Pickering Street, Loose, and was also later used by the trolleybuses.[2]

Maidstone operated a fleet of Sunbeam trolleybuses. In 1959, following closure of the nearby Hastings Tramways trolleybus system owned by Maidstone and District, Maidstone Corporation acquired five of their trolleybuses. Also purchased were two vehicles from the closing Brighton system, including now-preserved 52.[5]

Maidstone operated a universally double-deck fleet of motorbuses. Vehicles showed only destinations with no route numbers. The latter batches of motorbuses were standardised on the Leyland Titan as follows:

52 is at the East Anglia Transport Museum, 56 and 72 at The Trolleybus Museum at Sandtoft, Lincolnshire,

2004 saw the centenary anniversary of transport in Maidstone. In commemoration there was a rally, cavalcade and running day featuring preserved vehicles from Maidstone Corporation and other local operators, together with present-day operators. Local bus operators Arriva Southern Counties and Nu-Venture painted buses in liveries reminiscent of the ochre and fiesta blue Corporation liveries, with Arriva Dennis Dart 3176 and Nu-Venture Leyland Olympian 100 in ochre and Nu-Venture Leyland Titan T857 in fiesta blue. [6]