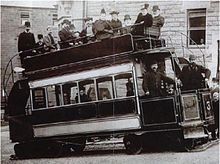 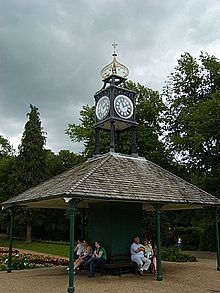 Matlock Cable Tramway was cable tramway that served the town of Matlock between 28 March 1893 and 30 September 1927. The tramway ran between Matlock railway station and the Hydro Spa Hotels of Smedley's and Rockside. One of the tramway's directors, Job Smith got the idea for a steep-gradient tram for Matlock while in San Francisco in 1862.[1]

The principal purpose of the tramway was to serve the Hydro Spa Hotels, bringing customers from the railway station near the River Derwent.

The tram was the steepest tramway in the world on public roads, featuring a 1 in 5½ grade slope (18%).[4] The tramcars had no independent power but were pulled by a cable situated below and between the tracks. The barn was situated at the top of the incline and a tram would go up whilst another would go down the hill.

Trams went from Crown Square, where a grand tram shelter once stood, to Rutland Street. The route was originally planned to begin at the railway station but due to its location, risks of flooding forced the terminus to be set up on Crown Square. 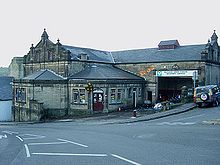 The depot was situated on Rutland Street and contained a boiler and a stationary steam engine, which pulled the cable and lifted the trams 300 feet up Bank Road. Fares used to be Tuppence up, Penny Down. Bank Road was not wide enough for two tracks, so a single track was used, with a passing place where the trams met. The up and down cables had to run in the same tube between the rails. The trams averaged 5½ mph, and had the advantage of the down-tram balancing the up-tram, and saving power in the Depot steam engine. A spare tram was kept in the Depot in case of need.

The original tram shelter, which once stood in Crown Square, has been preserved and is now standing at the head of Hall Leys Park.