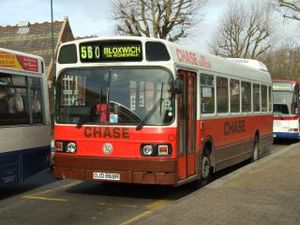 One of Chase's Leyland Nationals while in service. 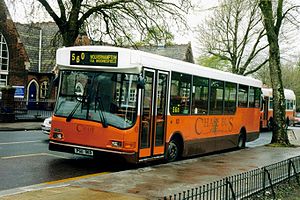 Chase Coaches Limited operated buses under the trading name of Chase Bus Services. They operated mainly Leyland National buses, many nearly 30 years old, from a depot based in Chasetown, Burntwood, Staffordshire. Bus services operated within the areas of Walsall, Cannock and Brownhills within Staffordshire and the West Midlands county.

Chase Coaches Limited was sold to Arriva Midlands on 25 February 2007 and ceased to operate completely on 28 April 2007.

Chase Bus Services was setup by Graham Dodd (who also ran up to eleven coaches operating as Chase Coaches Limited) after bus deregulation in 1986. The livery of white, orange and brown was adopted after the purchase of some former Greater Manchester PTE Leyland National buses.[1] Prior to the adoption of the orange/white/brown livery, the fleet colours were off-white with prussian blue relief. This paint scheme probably originated from a previous Cannock area operator, Churchbridge Luxury Coaches, who ceased to operate when Graham Dodd started operating.

The first service buses were East Lancs bodied Leyland Leopards. These were used on works services from around 1983 and moving onto bus services in 1986. Further Leyland Leopards once operated by Midland Red North were added to the fleet in 1987, but Leyland Nationals eventually became the standard bus type.[1] At one stage three Bristol RE / ECW buses were operated. In the early days of bus service operation around 1987 coaches would sometimes be used on bus services, for example an AEC Reliance /Plaxton and Bristol LHS types.

Chase Coaches Limited owned 27 buses at the time of the Arriva Midlands takeover.[2] The majority of these were Leyland Nationals, but also included DAF SB220/Ikarus Citibus and three Dennis Dart SLF/UVG Citistar single-deckers. As part of the takeover 40 employees transferred from Chase to Arriva Midlands.

All the buses apart from the Ikarus and three Darts were sold off at auction. The DAF and one of the Darts have been moved to Shrewsbury depot, with Cannock garage using the other two Darts.

Arriva Midlands operated a Leyland National day on 28 April 2007 to commemorate the end of Leyland National operations which took in a majority of the routes operated. The last day services included an additional two Leyland National buses duplicating the scheduled services. However, six Nationals were retained for a further month due to a lack of vehicles.[3]

This is a list of known bus services previously, at some stage, operated by Chase Coaches Limited under the Chase Bus Services banner:

The following is a list of coaches previously operated under the Chase Coaches Limited banner: