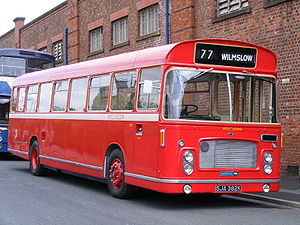 The North Western Road Car Company was a bus company located in Stockport, England. Formed in 1923 from the existing bus services of the British Automobile Traction Company Limited (itself a subsidiary of the British Electric Traction Company Limited) operations based in Macclesfield, the new company grew to operate bus services in five counties (Cheshire, Lancashire, West Yorkshire, Derbyshire and Staffordshire) through a combination of organic growth and the acquisition of other bus companies, such as the takeover in 1924 of the Mid-Cheshire Motor Bus Company Limited, which brought new operations based in Northwich and Flixton. The company also operated express coach services to locations such as London, North Wales and Yorkshire.

North Western had garages in:

The company was later to become part of the National Bus Company, which eventually split the company between its neighbouring subsidiaries after the main urban operations operated from depots in Stockport, Oldham, Glossop, Altrincham and Urmston areas were transferred to the SELNEC PTE in 1972. The remaining depots and services in Cheshire were transferred to Crosville, although the depots in Buxton and Matlock were transferred to Trent Motor Traction. North Western kept hold of its Manchester depot for its remaining express coach services, but the company was renamed as National Travel (North West) Limited in 1974.