Ottawa/Macdonald-Cartier International Airport or Macdonald-Cartier International Airport (L'aéroport international Macdonald-Cartier in French), (IATA: YOW, ICAO: CYOW) in Ottawa, Ontario, Canada is named after Sirs John A. Macdonald and George-Étienne Cartier. Located in Riverside South, 5.5 NM (10.2 km; 6.3 mi) south of downtown Ottawa, it is Canada's sixth busiest airport by airline passenger traffic and by aircraft movements, with 4,473,894 passengers and 172,115 aircraft movements in 2010.[4][5] The airport is an Air Canada Express and Air Canada focus city and the home base for First Air. The airport is classified as an airport of entry by NAV CANADA and is staffed by the Canada Border Services Agency. The airport is one of eight Canadian airports that have United States border preclearance facilities. The airport was formerly a military base known as CFB Ottawa South/CFB Uplands.

On July 2, 1927, twelve P-1 airplanes under command of Major Thomas G. Lanphier, Air Corps, proceeded from Selfridge Field to Ottawa, Canada, acting as Special Escort for Colonel Lindbergh, who was to attend at the opening of the Dominion Jubilee. First Lieutenant J. Thad Johnson, Air Corps, commanding 27th Pursuit Squadron, was killed in an unsuccessful parachute jump after collision with another plane of formation in demonstration on arrival over Ottawa. There is now a street leading to the airport industrial section named after the famed aviator.

The airport was originally opened at Uplands on a high plateau (then) south of Ottawa by the Ottawa Flying Club, which still operates from the field. During World War II, when it was known as Uplands, the airport hosted No. 2 Service Flying Training School for the British Commonwealth Air Training Plan, providing advanced pilot training in Harvard and Yale aircraft.

During the 1950s, while the airport was still named Uplands and a joint-use civilian/military field, it was the busiest airport in Canada by takeoffs and landings, reaching a peak of 307,079 aircraft movements in 1959,[6] nearly double its current traffic. At the time, the airport had scheduled airline flights by Trans-Canada Air Lines (Toronto, Montreal, and Val-d'Or), Trans Air (Churchill), and Eastern Air Lines (New York via Syracuse and Washington via Montreal).[6] With the arrival of civilian jet travel, the Canadian government built a new field south of the original one, with two much longer runways and a new terminal building designed to handle up to 900,000 passengers/year. The terminal building was originally scheduled to open in 1959, but during practices for the opening ceremonies, a United States Air Force F-104 Starfighter accidentally went supersonic during a low pass over the airport, and the resultant sonic boom shattered most of the glass in the airport (including the entire north wall) and damaged ceiling tiles, door and window frames, and even structural beams.[7] As a result, the opening was delayed until April 1960. The original terminal building and Trans-Canada Airways hangar continues in private use on the airport's north field. 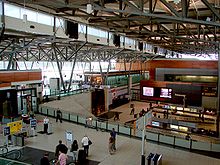 At the turn of the millennium, the Ottawa Airport Authority announced plans to build a second, adjacent terminal to meet the demands of increased traffic. The new terminal was built ahead of schedule and opened on October 12, 2003. The new terminal building now handles all airline passenger traffic. A section of the 1960 terminal, which was connected to the new terminal by an enclosed bridge, was still used at peak times of the day when extra gate space is needed, and it also handled most domestic prop flights.

The airport's board of directors approved a further expansion of the airport's passenger terminal on April 4, 2006. The extension of the new terminal was built in phases. Phase II, the next phase of the expansion program opened March 13, 2008. This new addition contains over 7,000 m2 (75,000 sq ft) of space and adds an additional twelve gates and seven jetways. The old 1960 terminal has been demolished and by the end of 2008, its former location was paved over to provide room for more gates and jetways. 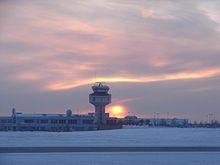 In February 2011, Ottawa was ranked number one in the world for the 2-5 million passengers category.

In February 2010, Ottawa Macdonald-Cartier International Airport was recognized by customers for its excellent customer service in the results of Airports Council International's (ACI) Airport Service Quality (ASQ) program. For the fifth consecutive year, Ottawa placed second overall for worldwide airports that serve between 0 and 5 million passengers. In 2008, 118 airports from around the world participated in ASQ.[8]

Along with Air Canada, the airport was the joint winner of the 2010 Ottawa Tourism Award for Tourism Partnership of the Year in recognition of the co-operative work done in promoting Air Canada's non-stop flight between Frankfurt and Ottawa.[9]

Macdonald-Cartier Airport is part of Canada's busiest air corridor between Ottawa, Montreal, and Toronto, which is commonly referred to as the Eastern Triangle.[10] Air Canada has had specially branded flights between Toronto, Ottawa and Montreal, known as Rapidair. The airport is also a gateway for flights to the eastern Arctic via Iqaluit. While Ottawa's airport serves all major North American airlines and has flights to Europe, the Caribbean and many cities to the United States, Ottawa is the largest metropolitan area of Canada which does not serve as a hub for any airline.

View from the Maple Leaf Lounge 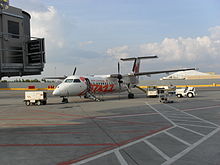 OC Transpo bus route 97 provides frequent express service to downtown along a dedicated transitway with connections to the O-Train and other bus stations. During the last transit meeting,[when?] Ottawa City Council had several proposals tabled that include a light rail link to the airport. Airport limos and shuttle buses are also available, and there are several rental car agencies located at the airport. 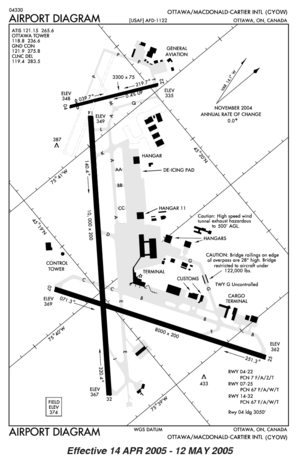 Diagram of the Ottawa airport(post 2009)

The airport actually consists of two distinct airfields connected by a taxiway. The smaller north field, originally referred to as Uplands, was originally founded by the Ottawa Flying Club in the late 1920s and then used by Trans-Canada Air Lines, the predecessor of Air Canada. This was the area primarily used by No. 2 Service Flying Training School. Several hangars were constructed during World War II, but were all demolished by the early 2000s.

The north field is still popular for general aviation, although only one of its runways, 04/22, is still in use. There are a number of aircraft component repair facilities located within the same grouping of buildings as the Ottawa Flying Club.

The south field consists of the two longer runways, 07/25 and 14/32, designed for jet airliners. The public passenger terminal is tucked into the north side of the intersection of the two runways, while the two general aviation FBOs for the south field are nearer to the threshold of runway 25. Customs services for private aircraft are available at the two fixed base operators (FBO), Shell Aerocentre and Esso, on the south field. There are also a number of aviation component repair facilities on airport grounds, mostly in the Esso Avitat complex. The Government of Canada operates a number of hangars, including the Canada Reception Centre, which is used to greet visiting dignitaries. The National Research Council operates two facilities on the north side of the grounds, including a wind tunnel. Transport Canada operates two facilities on airport grounds, one which houses training equipment, including flight simulators, and a hangar for maintenance and storage of government owned aircraft.

In 2003, the Ottawa Macdonald-Cartier International Airport Authority (OMCIAA) unveiled its new passenger terminal building. The terminal's design focuses on creating a calm and easy travel experience for passengers but also honours aspects of the region through the display of various art by commissioned Canadian artists. A soothing water feature representing the meeting of the region's three rivers runs throughout the terminal. Copper and limestone finishes are visible throughout, representative of the capital's Parliament Buildings. Other Canadian features include an Inukshuk commissioned and sponsored by First Air and a rare traditional birch bark canoe built by the master craftsman and Algonquin leader who created an identical one for the late Prime Minister Pierre Elliott Trudeau.[14] The airport features a large-scale carved glass sculpture by Canadian glass artist, Warren Carther.

In August 1959, a U.S. Air Force Lockheed F-104 Starfighter performed a low fly-by of the airport during celebration of the opening of a new terminal in Ottawa and accidentally went supersonic over the airport, causing windows and parts of the walls of the new terminal to shatter. The terminal was only reopened in 1960.

On May 19, 1967, an Air Canada Douglas DC-8 on a training flight from Montreal crashed on approach to the Ottawa airport, killing all three crew members.[15]

On July 23, 1983, Air Canada Flight 143 (a Boeing 767) departed the Ottawa airport enroute for Edmonton, Alberta. Due to system problems and confusion between metric and imperial units, the aircraft did not have sufficient fuel to complete the flight, and the engines stopped over Red Lake, Ontario. The crew managed to glide the aircraft to a safe landing in Gimli, Manitoba, earning it the nickname Gimli Glider.

On June 13, 1997, a North American Airlines Fairchild Swearingen Metroliner struck the runway with gear retracted during a botched approach, resulting in propellor strikes and a fire in one engine when it came to rest on runway 25. The aircraft was written off, but the crew escaped without injury.[17]

On September 15, 2000, a Miami Air International Boeing 727 arriving to pick up the Florida Panthers hockey team ran off the end of the runway. There were no injuries.[18]

On February 17, 2008, a WestJet Boeing 737 from Calgary International Airport went off the end of runway 07 shortly after landing. None of the 86 passengers and 6 crew members on board were injured. A slippery runway and the lack of use of the speed brakes on the aircraft contributed to the accident.[19]

On April 21, 2009, a Porter Airlines Bombardier Dash 8 had its tail damaged after it struck the ground upon landing. It was taken out of service and was later repaired.

On June 16, 2010, United Airlines Flight 8050, an Embraer ERJ-145 (N847HK) operated by Trans States Airlines, overran the runway and was substantially damaged when the nose gear collapsed.[20]

On September 4, 2011, United Airlines Flight 3363, an Embraer ERJ-145 (N840HK) operated by Trans States Airlines, slid off the runway upon landing. All 44 passengers aboard were uninjured, although the plane sustained substantial damage.