Ottawa's Vanier neighbourhood is a former municipality that ceased to exist in 2001 by becoming part of the city of Ottawa, Ontario. It is most notable for its large francophone population, and has 15,726 residents today (2006 census).

The Vanier neighbourhood is located in the east of Ottawa across the Rideau River from the neighbourhoods of Lowertown and Sandy Hill, and just south of Rockcliffe Park and New Edinburgh. To the east of Vanier are the suburbs of Gloucester. Vanier has a relatively small area with a high population density. Montreal Road is the main thoroughfare of the community.

In 1908, the communities of Janeville, Clarkstown and Clandeboye were joined to form the village of Eastview. In 1913, Eastview was incorporated as a town. Originally it was a popular destination for civil servants who wished to live at a distance from downtown. It later saw a large influx of French Canadians and became the main francophone area in the capital.

During the Depression, Eastview held the attention of the entire nation, as it became a public forum for national debates on birth control during The Eastview Birth Control Trial, which lasted from 1936 to 1937. Significant controversy erupted when Dorothea Palmer was believed to have been distributing birth control information to the poorer, predominantly Catholic neighbourhoods. Later, in 1963 it became a city, and in 1969 was renamed after the recently-deceased Governor General of Canada, Georges Vanier. 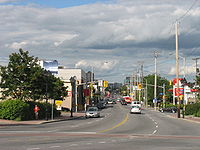 Montreal Road through the centre of Vanier.

Vanier has undergone significant changes since 2007, where it was an area associated with crime and prostitution.[1] Starting with an area closer to the Rideau River, it is increasingly considered a target for gentrification[citation needed]. It is one of the last relatively inexpensive Ottawa neighbourhoods with a desirable location next to downtown.

Vanier offers a wide choice of retail shops, strip malls, eateries, bars, etc. Both subsidized and self-financed housing is available here, with several existing and proposed upscale condominiums and infill developments. The population on the western edge of Vanier closer to the Rideau River, esp. the Kingsview Park neighbourhood, is among the more affluent.[citation needed]

Like nearby Lowertown, Ottawa's Vanier neighbourhood is home to a number of French-speaking immigrants from Africa and elsewhere. It is also the site of an urban maple syrup Maple Sugar Festival (Festival des Sucres) held in spring, and home to an outdoor Catholic shrine, the Grotte de Lourdes.[citation needed]

In 2006, the Museoparc Vanier Museopark opened to public. This new local and community museum is part of the Ottawa Museum Network among 10 others. Located in Parc Richelieu, it is a heritage site designated in 1997 by the City of Vanier and protected under the Ontario Heritage Act. As part of the designation document, the 17.5 acres (0.071 km2) domain include the Maple Forest (Sugar Bush), the Vanier branch of the Ottawa Public Library, statue of Notre-Dame-d'Afrique, and the two remaining pilars of the original gate at the entrance of the park. (More details at www.museoparc.ca)

Vanier is part of the federal riding of Ottawa—Vanier, and the Ottawa—Vanier provincial riding. It is traditionally one of the staunchly Liberal ridings in Canada, having voted for the party consistently since the riding's creation. Federally, it is represented by Mauril Belanger, and provincially by Madeleine Meilleur.

According to the Canada 2001 Census: