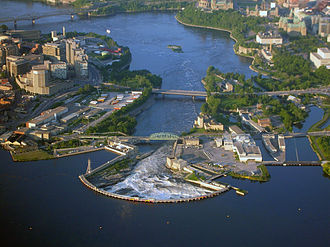 The Chaudière Falls are a set of cascades and waterfall in the centre of the Ottawa-Gatineau metropolitan area in Canada where the Ottawa River narrows between a rocky escarpment on both sides of the river. The location is just west of the Chaudière Bridge, northwest of the Canadian War Museum at LeBreton Flats and south of the E.B. Eddy complex. The islands at Chaudière Falls are Chaudière Island immediately to the east and Victoria Island east of that. The falls are about 60 metres (200 ft) wide and drop 15 metres (49 ft). The area around the falls was once heavily industrialized, especially in the 19th century, and provided a significant contribution to the growth of the surrounding cities.

The name of the falls come from the French Chutes de la Chaudière, meaning "Cauldron Falls" but has been historically translated as "Kettle Falls". The shape of the falls before its development resembled a large cauldron.

The damming of the river and the presence of industry have greatly altered the waterfall's appearance, especially in the summer when the Ottawa River is low. Then the falls all but disappear because the water is diverted to power stations. The development also greatly limits the locations from which to view the falls.

Exploration and the fur trade 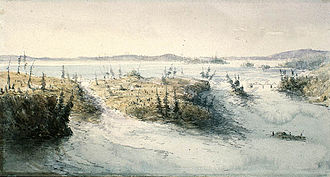 The Chaudière Falls and Chaudière Island in 1838 before damming.

Samuel de Champlain is the first recorded European to label the falls, chaudière, (which the English for a time would call 'Big Kettle')[1] during his 1613 voyage along the Ottawa River. Champlain describes in his journal on June 14, 1613,

At one place the water falls with such violence upon a rock, that, in the course of time, there has been hollowed out in it a wide and deep basin, so that the water flows round and round there and makes, in the middle, great whirlpools. Hence, the savages call it Asticou, which means kettle. This waterfall makes such a noise that it can be heard for more than two leagues off.[2]

In the days of the fur trade, the Chaudière Falls were an obstacle along the Ottawa River trade route. Canoes were portaged around the falls at the present day site of downtown Hull, Quebec.

The arrival of Philemon Wright to this area in 1800 marked the start of the development of the city of Hull. In 1827, the region's first bridge, a span of the Union Bridge was built close to the falls.[3] When the logging industry began in this area and farther upstream, the falls were also an obstacle for log driving. In 1829, Ruggles Wright (son of Philemon Wright) built the first timber slide, allowing logs and timber rafts to bypass the falls along the north shore. In 1836, George Buchannan built a slide for cribs between Victoria and Chaudière Islands (on the south side of the river) which later became a major tourist attraction where King Edward VII (then Prince Albert of Wales) in 1860, and the future George V in 1901 both experienced the thrill of "shooting the slides".[4]

Also in the 19th century, some of Canada's largest sawmills were located near the falls. Notable lumber barons in this area were Henry Franklin Bronson and John Rudolphus Booth.

Since then, all the islands and shores at the Chaudière Falls have been developed and the river's flow and drop have long been harnessed to operate paper mills and power stations. The E. B. Eddy Company used to operate the paper mills (operation stopped in 2007) and both Hydro Ottawa and Hydro-Québec operate run-of-the-river hydro-electric generating stations at the falls. 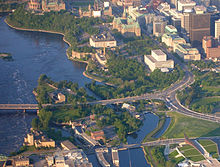 Victoria Island (45°25′16″N 75°42′44″W﻿ / ﻿45.421151°N 75.712228°W﻿ / 45.421151; -75.712228) is an island located between Ottawa and Gatineau on the Ottawa River, in Ontario. It is accessible via the Chaudière Bridge which connects Ottawa's Booth Street to Rue Eddy in Gatineau. The Portage Bridge connecting the two cities passes elevated over the island. It is located where the Ottawa River narrows near the Canadian War Museum at LeBreton Flats. Victoria Island, Ottawa had been used by First Nations people for centuries, called Asinabka (Place of Glare Rock). According to archaeological evidence, this site was the centre of convergence for trade and spiritual and cultural exchange.

Even its Parliament of Canada location holds a special meaning: a meeting place of three rivers, perched on a rocky point overlooking fast-moving water, wooded land and urban landscapes, within sight of sacred meeting grounds that the Algonquin peoples have always called Asinabka, or "Place of Glare Rock." (Report to Canadians, 2008, House of Commons)[5]

It is currently part of an area administerd by the National Capital Commission. The island contains an indigenous centre which has the history of the First Nations people, a tour, traditional dance, a cafe, a First Nations craft workshop.[6]

The station was originally built in 1912-1913 for the Gatineau Power Company by William Kennedy Jr. but did not begin operating until 1920, following World War I, when it had two turbines in operation. A third turbine was added in 1923. In 1965, Gatineau Power was sold to Hydro-Québec, which added a fourth turbine in 1968.[9]