Interstate 270 (abbreviated I-270) is a 34.70-mile (55.84 km) auxiliary Interstate Highway in the U.S. state of Maryland that travels between Interstate 495 (the Capital Beltway) just north of Bethesda, Montgomery County and Interstate 70 in the city of Frederick in Frederick County. It consists of the 32.60-mile (52.46 km) mainline as well as a 2.10-mile (3.38 km) spur that provides access to and from southbound I-495. I-270 is known as the Dwight D. Eisenhower Memorial Highway as well as the Washington National Pike. Most of the southern part of the route in Montgomery County passes through suburban areas around Rockville and Gaithersburg that are home to many biotech firms. This portion of I-270 is up to twelve lanes wide and consists of a local-express lane configuration as well as high-occupancy vehicle lanes that are in operation during peak travel times. North of the Gaithersburg area, the road continues through the northern part of Montgomery County, passing Germantown and Clarksburg as a six- to eight-lane highway with a HOV lane in the northbound direction only. North of here, I-270 continues through rural areas into Frederick County and toward the city of Frederick as a four-lane freeway.

The freeway was built in 1953 as the Washington National Pike between Bethesda and Frederick and carried U.S. Route 240, which was rerouted off what is now Maryland Route 355 between these two points. With the creation of the Interstate Highway System a few years later, the road was designated as Interstate 70S along with US 240. There were plans to extend I-70S to Interstate 95 in Washington, D.C. on the North Central Freeway from the Capital Beltway; however, they were cancelled in the 1970s due to opposition from residents in the freeway’s path. By 1975, I-70S became I-270 and the US 240 designation was removed from the road. Increasing traffic levels led to a $200 million widening of the road in Montgomery County to its current configuration and further increased traffic. Many improvements are slated for I-270, including the construction of three new interchanges and the widening of the route between Shady Grove Road and Frederick that would add HOV and express toll lanes. 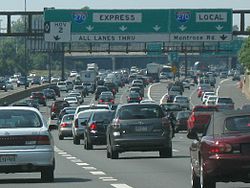 Interstate 270 near the exit for Montrose Road.

Interstate 270 heads northwest from an interchange with Interstate 495 (Capital Beltway) and Maryland Route 355 (Rockville Pike) in suburban Bethesda, Montgomery County as a six-lane freeway with a 55 mph (89 km/h) speed limit.[1][4] The left lane on each side is used as a high-occupancy vehicle lane (HOV lane) in the northbound direction between 3:30 and 6:30 PM weekdays and in the southbound direction between 6:00 and 9:00 AM weekdays.[1] At the southern terminus, I-270 only has access to and from the eastbound direction of I-495.[4] The road turns west and comes to an interchange with Maryland Route 187 (Old Georgetown Road). From here, I-270 continues west as a ten-lane freeway and merges with Interstate 270 Spur, which provides access to and from southbound I-495. Past this interchange, I-270 continues north as a twelve-lane freeway with an HOV lane and five travel lanes in each direction. The route passes through wooded suburban areas, where prior to the cloverleaf interchange with Montrose Road (MD 927), I-270 takes on a local-express lane configuration with the outer two lanes serving as local lanes and the inner three lanes and the HOV lane serving as express lanes.[1][4] Past Montrose Road, I-270 continues north into the Rockville area, turning northwest before it comes to a single-point urban interchange with Maryland Route 189 (Falls Road), where the highway sees 253,620 vehicles daily.[1][4] The road continues to a modified cloverleaf interchange with Maryland Route 28 (Montgomery Avenue).[4] Past MD 28, the freeway passes numerous business parks and some wooded areas before coming to an interchange with Shady Grove Road.[1][4] 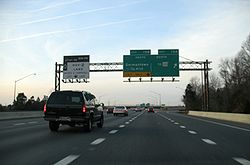 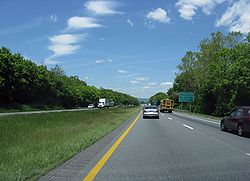 A short distance past the MD 109 interchange, I-270 crosses into Frederick County, continuing northwest through rural woodland and farmland. It reaches the Urbana area, where the route has an interchange with Maryland Route 80 (Fingerboard Road).[2][4] The highway briefly runs along the east side of MD 80 past this interchange before continuing through agricultural areas. It features a scenic overlook in the northbound direction as the road passes through Monocacy National Battlefield, which was the site of the Battle of Monocacy Junction. I-270 eventually leaves the battlefield area and continues into the commercial outskirts of Frederick.[4] Here, the road interchanges with Maryland Route 85 (Buckeystown Pike) near the Francis Scott Key Mall. I-270 continues through commercial areas before coming to its northern terminus at an interchange with Interstate 70 and U.S. Route 40 (Baltimore National Pike).[2][4] Past this interchange, the freeway continues north as the Frederick Freeway, a part of US 40 that interchanges with U.S. Route 15 and U.S. Route 340 a short distance north of I-270’s northern terminus.[4] 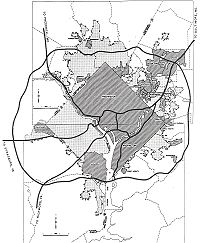 In 1947, plans were made to construct a freeway called the Washington National Pike parallel to U.S. Route 240 (present-day MD 355) between Bethesda and Frederick.[5] This road was completed in 1953, and the US 240 designation was moved to it. As a result, suburban growth began along the corridor between Washington, D.C. and Frederick, with several federal agencies including the United States Atomic Energy Commission, the National Bureau of Standards, and the National Institutes of Health moving their headquarters to Montgomery County.[6] Following the creation of the Interstate Highway System in 1956, Interstate 70S was designated along with US 240 on the Washington National Pike. It was a suffixed while the bypassed portion of the original US 240 north of the current interchange between I-495 and I-270 was designated as MD 355 by 1960.[7] A western spur that provided access to southbound I-495 was eventually built and became I-270.[8]

I-70S was projected to continue past the Capital Beltway into Washington, D.C. on the North Central Freeway to connect directly to Interstate 95. Plans for this freeway initially began in 1959 when a freeway was called for along the Georgia Avenue corridor.[9] In the mid 1960s, a study was proposed for the freeway that recommended several different routings between Washington, D.C. and the Capital Beltway.[10] By 1966, a route for the North Central Freeway was planned along a Baltimore & Ohio Railroad line running through the northeastern part of Washington and Takoma Park north to the Capital Beltway.[11] In a 1971 study by DeLeuw, Cather Associates and Harry Wesse & Associates, LTD, I-70S was planned to run from its southern terminus at I-495 and run concurrent with that route before turning south on the North Central Freeway and ending at I-95 in Washington.[8] The routing of the freeway through resdenital areas of Washington drew opposition from residents of the Takoma Park, Brookland, and Michigan Park neighborhoods who were successful in getting the freeway cancelled through their neighborhoods in 1970.[12] The North Central Freeway within Maryland was cancelled by the MDSHA in 1972 due to opposition from officials in Montgomery County.[13] In 1975, the Federal Highway Administration officially approved withdrawal of plans to construct the road south of the Capital Beltway.[14]

On May 18, 1975, I-70S was designated I-270 and the US 240 designation was removed from the road.[14][15] The western spur is now signed and publicly known simply as Interstate 270 Spur. By the 1980s, traffic congestion had grown on I-270 in Montgomery County; as a result, a $200 million project widened the road between I-495 and MD 118 to its current configuration, with some portions being widened to twelve lanes. This widening led to growth of residences and businesses along the I-270 corridor as far north as Germantown and increased traffic counts along the road.[16] Much of I-270 in Montgomery County is now a hub for biotech firms.[17] By 1999, congestion on the road grew to then-projected 2010 levels.[16]

The MDSHA is studying improvements for the I-270 corridor between Shady Grove Road and Frederick. Options for improvement include widening the highway to include more lanes with HOV and express toll lanes, as well as initiating rapid bus or light rail service along I-270 between Shady Grove and Clarksburg.[18] In addition, two new interchanges are planned for I-270 in Frederick County. The first planned interchange is with Maryland Route 75 near the Montgomery County border, which would involve extending MD 75 from MD 355 to the interchange with I-270 at a projected cost of $57,300,000. The other planned interchange is with Park Mills Road in Urbana, which has a projected cost of $48,900,000.[19] In Montgomery County, an interchange is proposed with an extension of Watkins Mill Road in Gaithersburg. This proposed interchange, which is being pushed by Montgomery County, has seen $2.4 million in design spending.[20] Funding for this interchange disappeared in September 2008 after the state of Maryland announced it was cutting $1.1 billion that was to go to transportation projects.[21]

Interstate 270 Spur (referred to as I-270Y by the MDSHA) is a 2.10-mile (3.38 km) spur off I-270 that connects I-270 and the Capital Beltway.[1] It carries traffic headed southbound on I-270 to southbound I-495 and from northbound I-495 to northbound I-270, filling in the missing movements not available at the interchange between I-270 and I-495.[22] The road heads north from I-495 as a six-lane freeway with a 55 mph (89 km/h) speed limit. The left lane in each direction serves as a HOV lane in operation between 3:30 and 6:30 PM weekdays in the northbound direction and between 6:00 and 9:00 AM weekdays in the southbound direction.[1][22] I-270 Spur continues north through wooded suburban areas to an interchange with Democracy Boulevard adjacent to the Westfield Montgomery shopping mall.[22] A short distance later, the road has a southbound exit and northbound entrance for the HOV lanes onto Fernwood Drive. Past here, I-270 Spur merges into northbound I-270 with separate ramps for the travel lanes and the HOV lanes.[1][22]

The entire route is in Montgomery County.