U.S. Route 40 (US 40) in the U.S. state of Maryland runs from western Maryland to Cecil County in the state's northeastern corner. With a total length of over 200 miles (320 km), it is the longest numbered highway in Maryland. Almost half of the road overlaps with Interstate 68 or Interstate 70, while the old alignment is generally known as U.S. Route 40 Alternate, U.S. Route 40 Scenic, or Maryland Route 144. West of Baltimore, the portions where it does not overlap an Interstate highway are mostly two-lane roads. The portion east of Baltimore is a four-lane divided highway, known as the Pulaski Highway (named for Casimir Pulaski), except for the two-lane Thomas J. Hatem Memorial Bridge, a toll bridge over the Susquehanna River.

From Cumberland west to Pennsylvania, US 40 is the successor to the historic National Road. East of Cumberland, towards Baltimore, US 40 follows several former turnpikes, most notably the Cumberland Turnpike and Baltimore and Frederick-town Turnpike. The route from Baltimore northeast to the Delaware state line follows another historic corridor towards Philadelphia, including the old Baltimore and Havre-de-Grace Turnpike (now mostly bypassed as Maryland Route 7). 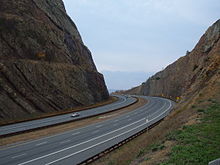 U.S. Route 40 enters Maryland from Pennsylvania in far western Maryland's Garrett County, carrying the name "National Pike." It passes through rural farmland on this side of the state, intersecting U.S. Route 219 at its interchange with Interstate 68. Here it joins I-68, which it follows to Cumberland. The previous alignments of US 40, carrying the name "National Pike", are either U.S. Route 40 Alternate or Scenic US 40, which follow I-68 and US 40 very closely through the county and serve as main streets for the towns they pass through. US 40 follows I-68 through Cumberland and passes into Washington County.

The I-68/US 40 roadway passes through a 340-foot (100 m) deep cut in Sideling Hill. Just to the east of the cut is the site of the former Sideling Hill Exhibit Center, a museum (currently located in Hancock, MD) that highlighted Western Maryland geology.[2] Shortly after this, in Hancock where the state of Maryland narrows to less than two miles (3 km) across, Interstate 68 ends. US 40 then defaults onto Interstate 70 at Exit 1 of the latter route. U.S. Route 522 is also carried by I-70, but it leaves to the south at the very next exit.

Interstate 70 and US 40 pass close to the West Virginia border along the Chesapeake and Ohio Canal and Potomac River, then turns toward Hagerstown. Shortly before this, though, US 40 separates from I-70 to the north at exit 9 and passes through the town on Washington Avenue (eastbound) and Franklin Street (westbound), where it interchanges with Interstate 81. Heading southeast out of Hagerstown, US 40 diverges into two separate routes, US 40 and US 40 Alt. US 40 parallels I-70, its longtime travel partner, crossing it at exit 32 near Greenbrier State Park on the Baltimore National Pike alignment. US 40 Alt heads southeast on the Old National Pike alignment through Boonsboro, crossing South Mountain at Turner's Gap. The two routes converge just west of Frederick. 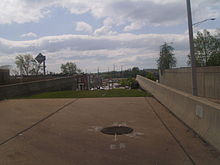 The western end of the freeway stub in Baltimore City intended for use by the canceled I-170. This freeway is now used by US 40.

In Frederick, US 40 uses Patrick Street before merging onto the US 15 expressway for a short distance. It leaves US 15 and rejoins I-70 on the outskirts of Frederick. MD 144 once again takes over along the old alignment of US 40. It then passes through Carroll County and Howard County, where US 40 once again separates to the south in Ellicott City and heads toward Baltimore, interchanging with US 29 and Interstate 695 in the process. This section is known as the Baltimore National Pike.

Inside Baltimore City, US 40 follows Edmondson Avenue, then passes south onto Franklin and Mulberry Streets as a one-way pair, shortly leaving to utilize the freeway stub meant to carry Interstate 170 for a short distance between Pulaski Street and Martin Luther King Jr. Boulevard. Through this area, an alignment called "Truck US 40" diverts larger vehicles onto an alternate route (largely via North Avenue), and also passes over Martin Luther King, Jr. Boulevard, which leads south to I-395. US 40 passes through the Mount Vernon neighborhood and a few blocks from Baltimore's Washington Monument.[3] It then rises onto the Orleans Street Viaduct, passing over Interstate 83 and through the downtown area. It follows Orleans Street until it meets the Pulaski Highway on the east side of the city. It carries this name on this four lane, divided highway alignment, having partial interchanges with Interstate 895 and 95 before exiting the city to the northeast.[4]

US 40, for the entire length of Pulaski Highway, closely parallels I-95. It also runs between Amtrak's Northeast Corridor and the CSX Philadelphia Subdivision. Pulaski Highway passes through Gunpowder Falls State Park near Joppa and the Aberdeen Proving Ground. Between Havre de Grace and Perryville it crosses the Susquehanna River on the Thomas J. Hatem Memorial Bridge. US 40 leaves Maryland in Elkton, crossing the border into Delaware.[4][5]

The National Road was opened from Cumberland on the Potomac River west and northwest into Pennsylvania, and beyond to Wheeling, Virginia on the Ohio River, in the 1810s. The turnpikes connecting Cumberland to Baltimore operated as the Cumberland Turnpike (Cumberland to Conococheague), Hagers-Town and Conococheague Turnpike (Conococheague to Hagerstown), Boonsborough Turnpike (Hagerstown to Boonsboro), and Baltimore and Frederick-town Turnpike (Boonsboro to Baltimore), completed in 1824. To the east of Baltimore, the Baltimore and Havre-de-Grace Turnpike went northeast from Baltimore to Havre de Grace, and public roads continued from Perryville, across the Susquehanna River from Havre de Grace to Elkton, where the Elk and Christiana Turnpike continued into Delaware.[citation needed]

The US 40 bridge over the Patapsco River in Ellicott City, originally constructed in 1936, will be replaced in a project that started in the spring of 2011 and is expected to be completed in 2013. During the bridge replacement, temporary bridges will be constructed to serve traffic for the first time in a major bridge project in Maryland.[6]