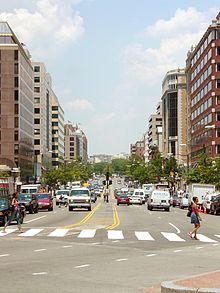 Connecticut Avenue is a major thoroughfare in the Northwest quadrant of Washington, D.C., and suburban Montgomery County, Maryland. It is one of the diagonal avenues radiating from the White House, and the segment south of Florida Avenue was one of the original streets in Pierre (Peter) Charles L'Enfant's's plan for Washington.[1] 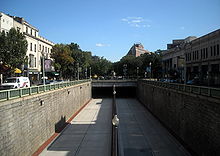 After crossing Florida Avenue near the Hilton Washington hotel, Connecticut Avenue narrows and winds between the Kalorama neighborhoods. (The Kalorama Triangle district extends eastward from Connecticut, while Sheridan-Kalorama lies to the west.) The avenue then crosses Rock Creek Park on the William Howard Taft Bridge and goes through upper Northwest Washington, D.C., including the Woodley Park, Cleveland Park, and Chevy Chase, D.C. neighborhoods. Between Woodley Park and Cleveland Park, Connecticut Avenue is carried over a deep valley on another bridge. Numerous older, Art Deco high-rise apartment buildings line the 3000 block, with slightly newer apartment buildings in the 4000 and 5000 blocks.

The Smithsonian National Zoological Park is located along Connecticut Avenue, halfway between the Woodley Park-Zoo/Adams Morgan and Cleveland Park Metro stations. Also located along this stretch of Connecticut Avenue is a major operational center of Intelsat, as are the landmark Wardman Park Marriott Hotel, the city's largest, and the Omni Shoreham Hotel. This section is also a major commuter route and has reversible lanes along most of its length which operate during the morning and evening rush hours (7:00–9:30 a.m. and 4:00–6:30 p.m.). It connects with the Rock Creek and Potomac Parkway via 24th Street. Mid-century era high-rise apartments line the avenue, with elegant, older detached homes on shady side streets. 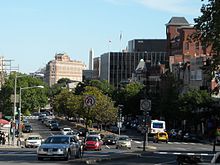 Connecticut Avenue, near the intersection of Florida Avenue. The Washington Monument is visible in the background.

After passing the main campus of the University of the District of Columbia near the Van Ness metrorail station, Connecticut Avenue exits the District of Columbia at Chevy Chase Circle, which is at the intersection of Connecticut and Western Avenues. Once entering Maryland, it gains the route designation Maryland State Highway 185 and goes through the Chevy Chase, Maryland postal area. The National 4-H Youth Conference Center is on this stretch of Connecticut Avenue, as is the Chevy Chase Club.

After interchanging with the Capital Beltway at Exit 33, Connecticut Avenue enters Kensington, where it is the major north-south street of the central business district. Connecticut Avenue used to end at University Boulevard (Maryland State Highway 193). However, Concord Avenue was extended northward to form an extension of Connecticut Avenue.

Connecticut Avenue is an arterial route in the National Highway System between K Street and Nebraska Avenue.

The following Metrobus routes travel along the street (listed from south to north):

The following Ride On routes travel along the street (listed from south to north):

The following MARC Train stop lies on the street: