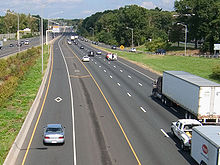 A permanent, separated high-occupancy vehicle lane on I-91 near Hartford, Connecticut 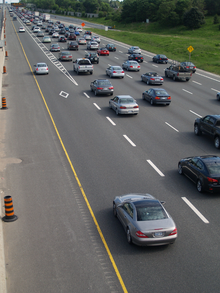 The HOV lanes in the Greater Toronto Area, including this one on Highway 404, are separated by a stripped buffer zone at most points. This buffer zone breaks occasionally to allow vehicles to enter and exit the HOV lane. 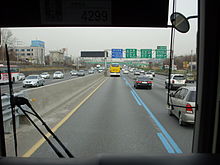 In transportation engineering and transportation planning, a high-occupancy vehicle lane (also called an HOV lane or carpool lane) is a lane reserved for vehicles with a driver and one or more passengers. These lanes are also known as carpool lanes, commuter lanes, restricted lanes, diamond lanes, express lanes, and are called transit lanes in Australia and New Zealand.

Qualification for HOV status varies by locality, for instance, in some cases it may require more than two passengers. When an automobile is used as an HOV, the group of people using it is often called a carpool, though the term HOV includes buses and vans. However, bus lanes may not necessarily be intended for use by carpools. An HOV or carpool may be allowed to travel on special road lanes, usually denoted with a diamond marking in the United States and Canada, on which vehicles not meeting minimum occupancy are prohibited, called restricted lanes, carpool lanes or diamond lanes. In some cases, single-occupant vehicles are allowed provided that they are hybrid vehicles or use native fuels. U.S. federal law states that HOV lanes "must allow motorcycles and bicycles to use the HOV facility, unless either or both create a safety hazard."[1] In Canada, no such exemptions exist, but (as of 2009[update]) the city of Winnipeg, Manitoba is planning to add HOV lanes around its downtown area. In some areas, such as Atlanta, Southern California, Hartford, Connecticut, Seattle Area, Boston Area, Salt Lake City and the Greater Toronto Area, the HOV lanes are full-time, while in others, such as the San Francisco Bay Area, Phoenix, Dallas-Fort Worth, Long Island, and Northern New Jersey, they are usable by other vehicles outside of peak hours. Honolulu uses a "zipper" barrier to create an additional HOV lane on the westbound side of Interstate H-1, and Boston shifts one lane of traffic from north to southbound on a six mile stretch of Interstate 93 between Quincy and Dorchester.

In some regions, buses are allowed to travel on the road shoulder when traffic becomes heavy, but it is often still illegal for cars (even HOVs) to take the shoulder to get around traffic jams. Highway 403 in Mississauga, Ontario, Canada (near Toronto) and Highway 404 in York Region and Toronto for instance had their shoulders widened in 2003 and 2004 respectively, so they serve a dual purpose as bus lanes and accident lanes. Although full HOV lanes are available for carpooling traffic, buses still continue to use shoulders along the 403. In Columbus, Ohio, shoulders on I-70 are HOV lanes reserved for buses at all times.

In emergency situations, an HOV "cordon" is sometimes placed prohibiting all vehicles from crossing the cordon during specified times. The cordon is enforced through the use of police checkpoints. For example, Midtown and Lower Manhattan were placed under cordons during the morning peak hours in the aftermath of the September 11, 2001 attacks and during the 2005 New York City transit strike.[2] 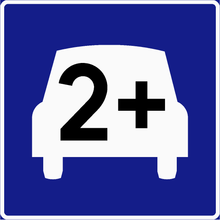 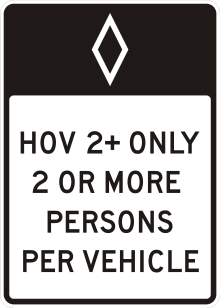 Standard restrictive traffic sign in the United States. The lozenge symbol (◊) indicates a preferential-only lane restriction, in this case an HOV with two or more passengers

HOV lanes used on I-24 in Nashville omit solid line separation which typically divides the adjacent traffic flow. This setup allows the operator to leave when desired.

California's decal to identify clean air vehicles that are allowed to use HOVs regardless of the number of passengers.

The relative rarity of high-occupancy vehicles compared to single occupancy vehicles—estimated at 7%[citation needed] of the traffic—in the United States and Canada makes HOV lanes work for the drivers who can use them. When it is uncongested, an HOV lane can move at full speed even when parallel (non-HOV) lanes suffer delays from queueing at bottlenecks. In theory, an HOV lane moves more people per lane at a higher speed while moving fewer vehicles.

In practice for some communities, including Atlanta, Houston, Los Angeles, Washington, D.C., and Seattle, HOV lanes regularly carry more people than adjacent regular lanes of travel, as reported by the Transportation Research Board[3] HOV Committee.[4]

Some cities that use separated HOV lanes make them reversible; i.e. usable only by inbound traffic during the morning rush and usable only by outbound traffic during the evening rush. This method met with criticism after an August 1995 incident in Pittsburgh, Pennsylvania, in which a negligent highway employee failed to close the gate preventing access to the HOV lanes of Interstate 279. This led to a high-speed head-on collision that killed six people.[5]

Houston is a city which employs reversible HOV lanes.[6] Seattle runs some of its HOV lanes in the express lanes of I-5 and I-90; others run in the mainline, outside of the express lane area.[7] San Diego uses a reversible, separated 2-lane HOV route along an eight mile stretch of I-15 that travels south-bound in the morning and north-bound in the afternoon and evening. This route also doubles as a toll-road for single occupant vehicles using the CalTrans FasTrak system. Montreal employs reversible lanes on Park Avenue, and has reversible bus lanes on the Champlain Bridge. The Crescent City Connection in New Orleans features two reversible HOV lanes. I-394 from Highway 100 to I-94 in Minneapolis also has a reversible HOV lane that is simultaneously tolled for single passenger automobiles through the MnPASS system when it is open for traffic.

Some HOV lanes are built on completely separate roadways from their corresponding general use lanes; some are constructed on parallel roads separated by a concrete barrier, while others are built on grade-separated (i.e. elevated or underground) roadways. One example is the Harbor Freeway in Los Angeles, California, where four HOV lanes travel on the upper deck of the freeway. This type of construction is said to maintain optimal efficiency by keeping general use traffic from merging back and forth into the HOV lanes, and by maximizing space on the main roadway for general use traffic.[citation needed] Additionally, major interchanges on such routes are often equipped with HOV-only ramps, which minimizes haphazard cross-freeway merging.

Houston's HOV lanes (almost all reversible as mentioned above, separated from the main freeway lanes by a concrete barrier, and open only during morning and evening rush hour) are managed by that region's public transit authority (they were originally intended as a form of bus rapid transit), and as such, those lanes lead to the "Park and Ride" lots used by their express commuter buses; the lanes use "secret" HOV lane exits (often elevated T-intersections) that lead directly to the lots, without having to exit the freeway to street intersections (both buses and regular vehicles use these special entrances and exits). Some of these lanes (notably on a portion of I-10 approaching Downtown Houston) are grade-separated. The lanes are closed and sealed with gates during off-peak hours and weekends.

Most cities use HOV lanes to allow carpool traffic to bypass areas of regular congestion. For example, in Metro Vancouver, British Columbia, HOV traffic is separated from general traffic and given priority access to the entrance to George Massey Tunnel. This method is also used extensively in Seattle (Washington) to allow HOV traffic to bypass ramp meters at freeway entrances and proceed directly onto the freeway without stopping.

An extreme example is Interstate 66 in the Northern Virginia suburbs of Washington, D.C. During rush hour, on a 10-mile (16 km) segment of I-66 between the Capital Beltway and the Theodore Roosevelt Bridge (Virginia state line/Washington city limit), the entire roadway in the direction of rush-hour traffic (eastbound in the morning, westbound in the evening) is reserved for HOV.[8] However traffic heading westbound to Dulles Airport is exempt from the HOV requirement, although the Dulles Access road is 3 miles before I-495; thus making HOV violators an easy target in that stretch. State and local police regularly stop all traffic to ensure HOV requirements are met. Violators face a $1000 fine and 6 demerit points for the fourth violation.

The traffic speed differential between HOV and general purpose lanes creates a potentially dangerous situation if the HOV lanes are not separated by a barrier. (A Texas Transportation Institute study found that HOV lanes lacking barrier separations caused a 50% increase in injury crashes.[9])

The National Motorists Association in the U.S. opposes HOV lanes[10] on the grounds that motorists are entitled to full use of highway systems paid for by their taxes. Similar arguments from other motorist advocacy groups put forth the argument that the best gains to be made in reducing high-density traffic is when all lanes are available for all vehicles, thus allowing a maximum of traffic to filter forward during peak travel times.

In the Netherlands, the first HOV lane in Europe was opened on the Rijksweg 1 on 27 October 1993. On the first day, a former Minister of Transport and Water Management drove on the lane alone in his car in order to draw forth a test case. The judge ruled that Dutch traffic law lacked the concept of a "car pool" and thus that the principle of equality was violated. At the end of the following year, the lane was opened to all traffic as a reversible lane.[11]

A number of cities are considering converting under-utilized HOV lanes to high-occupancy toll (HOT) lanes, and others intend to build new highway infrastructure.[12] This would permit single-occupant vehicles to buy the right to use the HOV lanes for a toll, but total flow would be regulated (with automatically determined variable pricing based on demand), to ensure total speeds on the HOV lane do not drop noticeably.

In August 2010, the Utah Department of Transportation implemented such a program for traffic along Interstate 15 from Layton in the north to Lehi in the south. The system uses RFID transmitters to monitor entry and exiting of the lane and charges drivers between 25 cents to one dollar, depending on demand. The transmitters can be turned off in the event that the driver has two or more occupants in their vehicle.

One symptom of HOV lanes that challenges the contention that HOV lanes are not effective has been the slugging phenomenon in the Northern Virginia suburbs of Washington, D.C. Slugging is the term used to describe a unique form of commuting where drivers go to pre-arranged "slug lines" and pick up commuters who need a ride. The driver shouts out his destination, and people in the line going to that destination enter the car on a first-come-first-served basis. There is very specific etiquette to the system to ensure a fair, consistent, and agreeable commute for all. Slugging benefits drivers by enabling them to use the HOV lane, benefits "sluggers" by getting them free rides, and benefits the community by decreasing the number of cars on the road.[13]

In San Francisco and surrounding communities, designated casual carpool sites allow drivers to pick up passengers to the same destination.

When HOV lanes were first introduced in California in the 1970s, some drivers placed an inflatable person in the passenger seat in an attempt to fool regulators. This was soon outlawed, but the practice persists. In the UK in 2005, a camera that was claimed to distinguish mannequins or dolls from humans was being tested on the Forth Road Bridge in an effort to thwart cheaters.[14]