Moorfields station is an underground railway station in Liverpool, England. It is situated on both the Northern and Wirral Lines of the Merseyrail network and is the only station on the network which has services to all other Merseyrail stations. 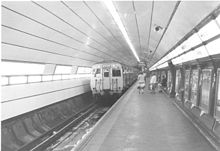 Shortly after the station opened in 1977

The station was built in the 1970s, partly as a replacement for Liverpool Exchange railway station, opening on 2 May 1977.[1] It is accessed via entrances at Moorfields and on the corner of Old Hall Street and Tithebarn Street (Old Hall Street being open only from 5.30am until 7pm on weekdays).

Services from the north which had previously terminated at Liverpool Exchange were diverted to Moorfields, and continued via a new tunnel to Liverpool Central, with some continuing south to Garston (later extending to Hunts Cross); these services form the Northern Line. At the same time, another new tunnel was built, carrying the Wirral Line in a loop from James Street via Moorfields, Lime Street, and Liverpool Central before returning to James Street; the Wirral Line platform opened on 30 October 1977.[1]

Passengers must, curiously for an underground station, go up an escalator from the Moorfields entrance to reach the ticket office - the station was originally intended to connect with a pedestrian walkway system, designed to separate pedestrians from traffic. Only a small section of the system was constructed in the 1970s and the scheme eventually fell by the wayside. From the ticket office, another escalator leads down to the main passenger tunnel which links the Northern and Wirral Line platforms and the Old Hall Street entrance. A new 'M to Go' shop opened at the Old Hall Street entrance in 2006, acting as a combined snack shop/ticket counter, with another new 'M to Go' shop planned for the main entrance of the station which could open later in 2011.

The usage of the station Monday to Friday is much greater than the statistics show, since they credit "Liverpool" passengers to Lime Street station, and do not include day or season ticket holders. The station is however significantly quieter at weekends, since it is primarily used by city centre workers and is less convenient for most of the city centre retail areas than Liverpool Central.

Northbound trains run every 15 minutes (Monday to Saturday daytime) to each of Southport, Ormskirk and Kirkby.