Chester railway station is a railway station in Newtown in the city of Chester, England. It is currently operated by Arriva Trains Wales, although Merseyrail, Northern Rail and Virgin Trains also run services from the station. It is situated to the north-east of the city centre. From 1875 to 1969 the station was known as Chester General station, to distinguish from Chester Northgate.[1]

A frequent free City-Rail bus service operates between the railway station and the city centre. At one time it was necessary to show a valid ticket when boarding this service. However, since the introduction of Arriva Trains Wales operated ticket barriers, services to and from the city centre are now free.

Work on the £10 million regeneration of the station and surrounding areas as part of the Chester Renaissance programme[2] has recently been completed. The development includes a new roof, improved customer facilities and better access to the station.

A small plaque commemorating Thomas Brassey, one of the world's greatest railway building contractors in the early to mid-19th century, can be seen on the wall opposite the new booking office. Thomas Brassey was born at Buerton, on what is now the Eaton Estate, some six miles south of Chester; the house is no longer standing.

Historically, Chester General station was a joint station between the Chester and Holyhead Railway, the Chester and Crewe Railway and the Birkenhead Railway. Later these became the London and North Western Railway and the Great Western Railway (GWR). The joint station dates from 1848, replacing at least two earlier termini of the railway companies concerned.[citation needed]

Architecturally the station has an Italianate frontage designed by Francis Thompson. The station also has carved wooden owls at some strategic locations high in the roof beams to help deter feral pigeons.

From 1875, Chester was also served by Chester Northgate station (owned by the Cheshire Lines Committee); however, that station was closed in 1969 and is now the site of a leisure centre.

In 1972, the Chester General rail crash occurred in the station, causing severe damage to the building and the several trains involved.

In 1993, Chester became the terminus of one of the four Wirral Line branches of the Merseyrail network, using third rail electrification. This gave rapid access to the Wirral accessing underground stations in central Liverpool and Birkenhead. The historic Chester and Birkenhead Railway, the first railway to serve Chester, is now a branch of Merseyrail's Wirral Line.

The station was built between 1847 and 1848, designed by Francis Thompson, and built by the railway contractor Thomas Brassey. Also involved in the design and construction were the engineer C. H. Wild. who designed the train shed, and Robert Stephenson. It is built in Staffordshire blue brick and pale grey Storeton sandstone with slate roofs.[3][4] Its architectural style is Italianate.[4] It has a very long two-storey façade, with a 15-bay central section, and five-bay lateral projecting pavilions, each containing a pair of towers. The middle seven bays of the central section contain carvings by John Thomas.[3] The station building has been designated by English Heritage as a Grade II* listed building.[4]

Chester is served by four train operating companies. A wide range of destinations within Wales are now within easy reach since Arriva commenced operations in 2005. 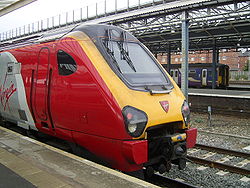 The Wirral Line provides a direct service to central Liverpool and central Birkenhead with underground stations at Birkenhead Hamilton Square, Liverpool James Street, Liverpool Moorfields, Liverpool Lime Street Low Level station and Liverpool Central. The Wirral Line runs in a circle through Liverpool's city centre from which trains return to Chester. A change at Birkenhead Hamilton Square station gives connections to New Brighton and West Kirby. A change at Liverpool Moorfields gives access to all of the Merseyrail Electrics Northern Line services on the Liverpool bank of the Mersey. City Line services and Inter-City services are accessed by changing at Liverpool Lime Street. 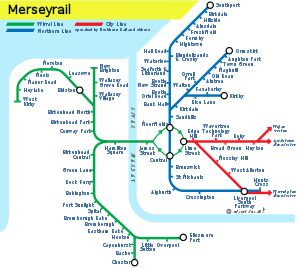 Merseyrail map with Chester to the south of the Network

Chester is the only station on the Merseyrail network which Merseyrail does not manage, apart from the high level part of Liverpool Lime Street (managed by Network Rail) where the only Merseyrail services are diesel operated City Line trains which do not penetrate Merseyrail's electrified lines.

There are also proposals under consideration to reinstate a regular passenger service along the Halton Curve south of Runcorn railway station, which would permit the re-introduction of through trains from Liverpool to the North Wales Coast.

In mid 2005, Arriva Trains Wales announced a plan to improve the condition of the station, as Chester General had been well known[citation needed] for its neglected appearance. The first of these improvements to be implemented was the ticket barriers, which came into operation in July 2006. On 31 October 2008 the station renaissance was officially completed and a plaque was unveiled by current Chester MP, Christine Russell. Improved station facilities now include a new travel centre, new customer information screens, a Costa Coffee outlet, new bicycle stands and a waiting area. 2009 is scheduled to see the start of further upgrades to the island platform and footbridge. The station will soon undergo a £1.4m upgrade which provides new passenger facilities including a waiting room, a second stairway for better access to platforms and new office space at the Grade II listed railway station, work is due to start in Summer 2010 and is due to be finished at the end of November 2010.

The station marks one end of the Baker Way, a footpath leading to Delamere railway station.

The station has seven platforms. Platform 1 is a bay platform located at the east end. This is used mainly by the hourly Chester to Crewe shuttles. Platform 2 is another bay platform and is located at the western end. This is mainly used by trains heading towards Cardiff/Birmingham via Wrexham and Shrewsbury. Platform 3 is a through platform and is closest to the concourse. This is most commonly used for North Wales bound services and is split into 3a and 3b.

Over the bridge there is access to the island platform. Opposite Platform 3 is Platform 4, another through platform. This is mainly used for London bound services. Some Cardiff/Birmingham bound services also turn back here having arrived from Holyhead. There are two east facing bays at the eastern end (Platforms 5 and 6, for the Mid-Cheshire line) mainly used by Northern Rail. Platform 7 at the northern end is an additional through platform. Platform 7b is used for terminating services on the Wirral Line, and is the only electrified line (3rd rail). Platforms 4 and 7 are also split into 'a' (eastern) and 'b' (western) sections and are thus capable of accommodating two trains at once.