Ormskirk Station on postcard dated 1915. The station was much larger at this time. 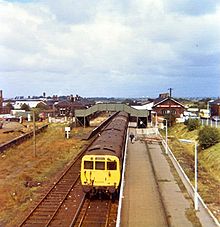 Ormskirk station in 1973, before Up line (by this time merely a passing loop used for stock movements and engineering trains) was removed

The current station consists of a single platform. An interesting characteristic is how the electric Merseyrail trains and diesel Northern Rail trains are separated on arrival by a large buffer, so passengers wishing to go from one to another walk a dozen yards or so along the platform to move between trains. (A similar layout exists at Kirkby.) Prior to the restructuring of the railways in the 1960s and 1970s, there were two platforms. The EMU commuter trains would pull into a bay platform (with buffers) as can be seen on the 1915 photograph (to the right of the picture). This practice ended following the withdrawal of through trains between Liverpool and Preston via this route (the last through trains ran on 3 May 1970) and all trains now use the former Liverpool platform (the Preston-bound Up platform remains but is disused). The bay platform is now a footpath leading to the bus station.

Services to Liverpool Central operate frequently, running every 15 minutes during the day and every 30 minutes at other times. Services to Preston are irregular, with a total of 12 services in each direction Monday–Saturday, and no service on Sundays.

The former link between Ormskirk and Southport, via the Burscough Curves, was closed in 1962. The Skelmersdale Branch has also been lost, having closed to passengers in 1956 and to all traffic seven years later. It was lifted in 1968, though the Burscough curves remained extant until the mid 1980s.[1]

The Ormskirk Advertiser announced in June 2008 that Ormskirk railway station was to undergo a £1.5 million makeover, a project which was run in partnership between West Lancashire District Council, Lancashire County Council, Merseyrail and Network Rail. Among the refurbishments include a new booking hall, waiting room, toilet facilities, ticket counters and new automatic swinging doors, as well as a remodelled and landscaped path and bicycle route up to the bus interchange. Work started in January 2009[2] and completed during the summer of 2009, with the opening taking place on 31 July 2009. The station is classed as eco-friendly and gets its green credentials by using a system that harvests rainwater, as well as other various energy-saving measures.[3]