Mansfield is a town in Tolland County, Connecticut, United States. The population was 20,720 at the 2000 census.

Mansfield was incorporated in October 1702 from the Town of Windham, in Hartford County. When Windham County was formed on 12 May 1726, Mansfield then became part of that county. A century later, at a town meeting on 3 April 1826, selectmen voted to ask the General Assembly to annex Mansfield to Tolland County. That occurred the following year.

The town of Mansfield contains the community of Storrs, which is home to the main campus of the University of Connecticut.

The first silk mill in the United States was constructed in Mansfield and financed by pilgrim descendent, William Fisk. The town, along with neighboring Willimantic, played an important role in the manufacture of thread and other textiles. Though nothing remains of the mill (now on display at the Henry Ford Museum in Detroit, Michigan), Mansfield has held onto several other historic landmarks. A fully intact gristmill, dating to 1835, the Gurleyville Gristmill is the only one of its kind in Connecticut. Built on the Fenton River, this stone grist mill remains intact with the original equipment. There are tours available May through October. The adjacent miller's house is the birthplace of former CT governor Wilbur L. Cross. More recent yet rare nonetheless, the Mansfield Drive-in, a drive-in movie theater, and Lucky Strike Lanes, a duckpin bowling alley, are among the last of their breed in the nation.

The Mansfield Training School and Hospital, situated on more than 1,000 acres (4.0 km2) and encompassing 85 buildings, was operated by the Connecticut Department of Mental Retardation until its closure, after legal challenges, in 1993. Four years later, the former director and a once staunch advocate of the school declared, "The Mansfield Training School is closed: the swamp has finally been drained."[2] Since then, the site has been allowed to deteriorate, though the University of Connecticut has been slowly finding uses for and fixing up many of the buildings. The school, with its eerie overturned wheelchairs and neo-classical hospital, remains a magnet for adventurous locals, the police, and amateur photographers. Located directly across U.S. Route 44 from the Mansfield Training School is the Donald T. Bergin Correctional Institution. The Level 2 facility houses approximately 1,000 inmates. It serves as a pre-release center for inmates who are approaching the end of their sentence or a period of supervised community placement.

Development has increased in recent years, leading to the imposition of a temporary moratorium on new subdivisions, as well as additional land acquisition. Mansfield enjoys a moderate amount of protected open space, notably Mansfield Hollow State Park, eight town parks and preserves, and numerous Joshua's Trust properties,[3] in addition to university holdings. Three large farms operate within Mansfield, including Mountain Dairy, which has been producing and processing milk under the stewardship of one family since 1871. In contrast to many municipalities, Mansfield is actively pursuing a program of smart growth through the construction of a livable downtown.[4]

On the Northeastern edge of town (Mount Hope Village), the playwright, actor and producer Willard Mack owned a large estate (originally built by William Fisk)[citation needed]. Mack permitted his other various friends and associates to board and breed their thoroughbreds on his property. One of these, boxing legend Jack Dempsey, made continual use of these facilities until Mack's death in the mid-1930s.[5] During Mack's stewardship of this property, the famous Arabian Stallion "Broomstick", sire of numerous Kentucky Derby and Triple Crown winning thoroughbreds, was also a temporary resident.[citation needed] The property has since been purchased and maintained by private owners.

For the most part, Mansfield is a safe place. In 2005, Slate named Storrs "America's Best Place to Avoid Death Due to Natural Disaster."[6] Mansfield has also garnered attention in state media for a number of missteps made by the university. The Hartford Courant has drawn attention to water issues in the town, including the pumping of the Fenton River dry (in 2005) and, notably, contaminated groundwater and cancer clusters in the town (cf. A Civil Action and Erin Brockovich).[7]

U.S. Route 6 passes through the southern part of Mansfield as an isolated stretch of divided highway, part of the planned but never realized interstate between Hartford, Connecticut and Providence, Rhode Island. Construction began midway between Hartford and Providence, far removed from population centers. When opposition arose and complications developed, the project was shelved, with only stranded parts of the highway completed. 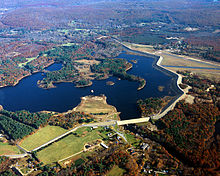 The Mansfield Hollow Dam, constructed in 1952, impounds the waters of the Natchaug, Fenton and Mt. Hope Rivers.

There were 5,291 households out of which 28.1% had children under the age of 18 living with them, 48.4% were married couples living together, 7.7% had a female householder with no husband present, and 41.0% were non-families. 27.0% of all households were made up of individuals and 10.3% had someone living alone who was 65 years of age or older. The average household size was 2.40 and the average family size was 2.92.

All of Mansfield is zoned to Mansfield Middle School, the 2007-08 Connecticut Association of Schools (CAS) School of the Year.