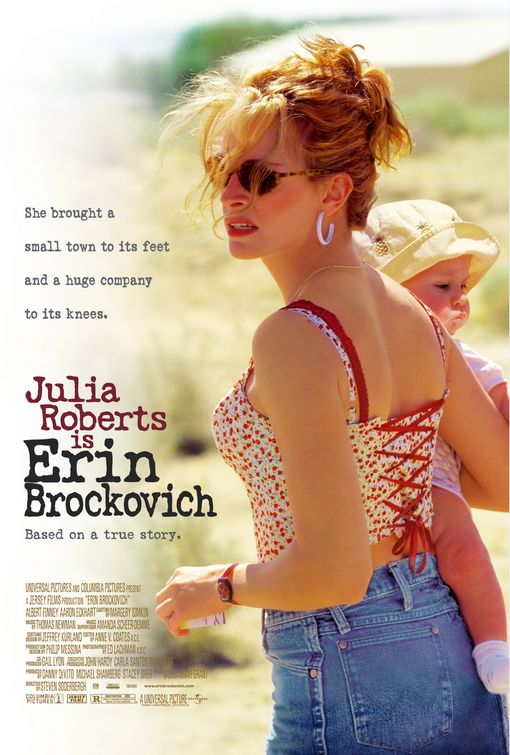 "Erin Brockovich" is a 2000 which dramatizes the story of 's first fight against the American West Coast energy giant known as PG&E. The film was directed by and featured actress in the lead role for which she subsequently won the . It is based on a true story and the real has a as a waitress named Julia. The original music score was composed by .

The film was produced and distributed in North America by , and was distributed overseas by .

() is an unemployed single mother of three children who, after losing a personal injury lawsuit against a doctor in a car accident she was in, asks her lawyer, Edward L. Masry (), if he can find her a job in compensation for the loss. Ed gives her work as a file in his office, and she runs across some files on a case involving real-estate and medical records against PG&E.

Erin begins digging into the particulars of the case, convinced that the facts simply do not add up, and persuades Ed to allow her further research. After investigation, she discovers a systematic cover-up of the industrial poisoning () of the town of Hinkley's water supply that threatens the health of an entire community. She finds that PG&E is responsible for the extensive illnesses residents of Hinkley have been diagnosed with and fights to bring the company to justice.

* as
* as Edward L. Masry
* as George
* as Donna Jensen
* as Charles Embry
* as Kurt Potter
* as Pamela Duncan
* Erin Brockovich-Ellis as Julia, the waitress

The majority of critics responded favorably towards the film. It holds a certified "Fresh" rating of 83% on film review website .

While the general facts of the story are accurate, there are some minor discrepancies between actual events and the movie, as well as a number of controversial and disputed issues more fundamental to the case. In the film, Erin Brockovich appears to deliberately use her cleavage to seduce the water board attendant to allow her to access the documents. Brockovich-Ellis has acknowledged that her cleavage may have had an influence, but denies consciously trying to influence individuals in this way.

"" "" contains some references to Erin Brockovich (most likely the person, not the film). When Marge proposes hiring Brockovich, Bart flatteringly calls Brockovich "the with a of ". After Judge Snyder bans sugar from Springfield, Homer angrily calls Marge "Erin Choco-snitch" and "Blue Hair-on Brocko-witch". At the end of the end of the episode, praising Marge's ultimately unsuccessful efforts, Homer calls Marge "a regular "Carin' A-Lot-ovich".