Stafford, Connecticut
This article is about the town. For the village of Stafford, see Stafford Hollow, Connecticut. 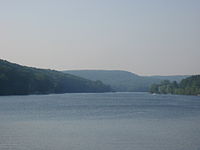 The Colonial Town of Stafford began as a rural agricultural community. The easy availability of water power from the tributaries of the Willimantic River led to industrialization, and this abundance of power helped generate local population growth. By the mid-19th century, Stafford was connected by railroad to markets across New England, and before the State Highway projects of the 1920s and 1930s, the town had a trolley connection to Rockville, CT. During the Civil War, factories in Stafford made cannonballs and other war supplies for the northern forces.

Stafford is located at the intersection of Routes 190 and 32, in the northeastern region of the state. The community consists of the downtown area known as Stafford Springs and the more rural villages of Crystal Lake, Ellithorpe, Hydeville, Orcuttsville, Staffordville, Stafford Hollow, Village Hill, and West Stafford.

While the town has managed to maintain its New England mill-town charm and culture, it is rapidly becoming a bedroom commuter town feeding into larger area communities. Many residents drive into Hartford, Manchester, and Enfield, Connecticut, as well as Springfield, Massachusetts, all of which can be reached in about a 30-minute auto commute. It is also about a half-hour drive to the University of Connecticut's [1] main campus in Storrs.

There were 4,353 households out of which 34.8% had children under the age of 18 living with them, 56.3% were married couples living together, 10.1% had a female householder with no husband present, and 29.1% were non-families. 23.4% of all households were made up of individuals and 8.9% had someone living alone who was 65 years of age or older. The average household size was 2.56 and the average family size was 3.04. 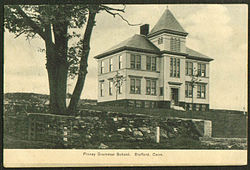 At the present time there are three elementary, one middle and one high school in Stafford, in addition to a parochial K-8 school, Saint Edwards School [3].

The school system serving pre-K through 12 has earned an excellent reputation.

Stafford High School [4] fields competitive teams in football, basketball, cross country, track, soccer, field hockey, baseball and softball and in more recent years wrestling, as well as offering an active intramural sports program. Each spring the music, arts, and drama departments of the high and middle schools put on plays and musical productions. A variety of extracurricular activities rounds out the school program.

Johnson Memorial Medical Center [5] is a 90-bed acute care facility, located on Route 190 in Stafford, The Hospital offers inpatient and outpatient services, including medical and surgical, obstetrics and gynecology, pediatrics, mental health, intensive/coronary care, oncology, physical rehabilitation and emergency care. The facility was built in 1975. It has an adjoining professional building which houses the practices of area doctors.

Family Birth Suites at the Nirenberg Center [7] is a state of the art birthing center featuring six private birthing suites designed to accommodate patients throughout their stay, for labor, delivery, recovery, and postpartum care.

Stafford hosts offices of a number of physicians, dentists, optometrists, chiropractors, physical therapists and other health professionals. The Stafford Veterinary Center serves the needs of animals, both large and small.

The town has several tennis courts, ball fields, soccer fields, and several parks. In addition, there are private hunting and fishing clubs, as well as recreational swimming and tennis clubs. During the spring and summer there is an active Little League program, youth softball, adult softball for men and women, and a summer recreational program offering swimming lessons and martial arts instruction for children. There are programs for youth football, basketball, soccer and hockey.

The Stafford Motor Speedway attracts tens of thousands of spectators every year and is a fixture of spring and summer. There is a small public beach on Staffordville Lake [8] which is a summertime destination for many residents. Stafford also has (limited) access to Sandy Beach on Crystal Lake in Ellington. Plans are being developed to provide hiking and multi-use trails within Stafford. There are two bed and breakfasts as well as a few campgrounds (Sun Valley [9], Roaring Brook [10] and Mineral Springs [11]) that provide accommodation for visitors.

Stafford is governed by a Board of Selectmen consisting of three members, elected by town voters on odd years for a two-year term. The town has no charter, but is governed in general by Connecticut General Statutes (laws) and specifically by ordinances voted upon at town meetings.

Stafford is served by the Connecticut State Police through the Resident State Trooper program. The State Police Troop C Barracks is located nearby, just off I-84 in Tolland. There are also full-time and part-time constables that serve with resident troopers. Two volunteer fire departments cover Stafford with strategically located firehouses (West Stafford Fire [12], Staffordville Fire #1 [13]). The Town also hosts a volunteer ambulance organization [14], which serves the area.

A modern sewer plant, constructed in 1972, services approximately one-third of the town, including the commercial and industrial area in the Service District. Curbside pick-up of municipal refuse and recyclables to be recycled is available within the Stafford Springs Service District.

Notable residents, past and present