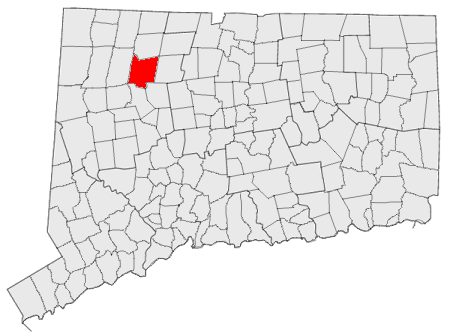 Torrington is the largest city in Litchfield County, and the northwestern region. It is also the core city of the largest micropolitan area in the . [Small-town USA goes micropolitan. 2004. October 18, 2006. ] The population was 36,248 at the 2000 census.

Torrington is a former mill town, as are most other towns along the . It is currently competing with the neighboring city of Winsted to recreate a pleasant environment. Downtown Torrington is home to the [http://www.nutmegconservatory.org/index.html Nutmeg Conservatory for the Arts,] which trains world-class dancers and whose Company performs in the Warner Theatre, a 1,700 seat auditorium restored in 2002 to its original 1931 glory. The theater, while originally built as a cinema by the film studio, has been reborn as a performing arts venue and arts instruction organization, and will serve as a cornerstone of the city's downtown revitalization project.

The daily newspaper in town is "The Register Citizen", a Journal Register Company publication that serves Torrington and Winsted, in addition to most of the Northwest Corner.

The current of Torrington is 24-year-old Ryan Bingham.

Torrington, originally Wolcottville, was first settled in 1735 by Ebenezer Lyman Jr. of Durham, . [Torrington was known as Wolcottville, for the Wolcott family of Connecticut, governors, from 1813 until 1881. [http://www.cthistoryonline.org/cdm-cho/item_viewer.php?CISOROOT=/cho&CISOPTR=521&CISOBOX=1&REC=3] ] Its early settlers resided on the hills west of the where the first school, church, store, and tavern were constructed. Later, the eastern hill known as Torringford was settled as it provided the best farmland for agricultural work. Torrington was given permission to organize a government and incorporate as a town in October of 1740.

The fast moving waters of the were utilized as waterpower for early 19th century industries. Industrial growth skyrocketed in 1813 when Frederick Wolcott constructed a woolen mill. The mill attracted a large workforce and created a demand for goods, services, and housing.

Israel Coe and Erastus Hodges began the construction of two brass mills on the Naugatuck River in 1834. This event sparked the beginning of the brass industry in Torrington, which would later spread throughout the entire . In 1849, the railroad was completed which connected Torrington with other population centers, ending its isolation and stimulating further industrial growth. Soon, Torrington was producing a variety of metal products including needles, brass, hardware, bicycles, and tacks. Torrington's growing industrial plants attracted English, Irish, and German immigrants throughout the 19th and early 20th century. Between 1880 and 1920, Torrington's population exploded from 3,000 to 22,000 as immigration from southern and eastern Europe increased. During this period, immigrants included the Poles, Czechs, Slovaks, Italians and Lebanese. Torrington was charted as a city in 1923.

In 1955, a massive flood destroyed much of the area and property in the region when and caused local rivers to overflow.

Torrington is the birthplace of abolitionist John Brown.

The eastern and western sides of the city, at its borders, are at the tops of peaks, while the downtown and central sections of the city are in the . This provides some interesting views from the higher locations, with the city lights as a backdrop below. Due to the lack of suitable highways and bypass routes in an East/West direction, crossing the city requires driving down into the valley and back up the other side.

Torrington is planning to revitalize its downtown area in an effort to attract residents and visitors to the city's shopping and cultural opportunities. These redevelopment plans are still in discussion and are not yet completed.

The following ideas have been discussed:

The historic restoration and renovation to downtown were completed in the beginning of 2006. The Coe Memorial Park Subcommittee and the City of Torrington, worked closely with Ferrero Hixon Associates, to restore the Park to a Victorian walking park, much as it was when it was first gifted to the Town in 1906. These renovations included new sidewalks and paths, and the relocation of memorials and monuments. In 2005, The Garden Goddess was hired as the Park's main horticulturist.

Torrington hopes to attract a wide variety of merchants into its downtown setting. Empty and abandoned buildings would be converted into a mix of retail, office, and residential space. A potential plan discusses the possibility of a national clothing retailer or bookstore chain constructing a location at the top of Water Street on the site of the . This plan has come under fire by some because it involves the demolition of the former Torrington railroad station, which is considered by many to be historical.

A is slated to be constructed in the heart of downtown on either Main Street or Water Street. The municipal parking lot next to the would also serve as a downtown parking area. Because the downtown redevelopment project emphasizes pedestrian access, brick sidewalks lined with trees, benches, and bike racks would be constructed along Main Street.

To relieve congestion, the city plans to convert the Main Street/Water Street/East Main Street downtown intersection into a "+" shape, rather than its current criticized setup. The city expects to convert Main Street into a with parking lining one side of the street. The neighboring Prospect Street would also be converted into a with traffic flowing in the opposite direction. Most of the roads are in medium to poor condition and filled with pot holes.

The east end of the city known as Torringford, along , has been undergoing a period of non-stop, rapid expansion since 1996, when a shopping complex was built on the corner of Rte 202 and 183 with a , , Sears (which has since closed due to competition from nearby Home Depot in neighboring New Hartford) and . A has been built where Sears Hardware was previously located. Led by the development of multiple shopping centers at that time, the once empty farm land has become home to many chains that are new to the city. Among the current projects are the construction of a new drug store, the relocation of a local bank branch and the opening of a new car wash. Expected to begin soon is the construction of a new supermarket. Construction has already completed on a plaza anchored by a Target department store. Target opened in October 2007. , , , and will also be built in the Target development.

The City of Torrington typically collects 100% of taxes owed through the use of private tax collectors.

Torrington's bond rating is A1.

Three primary state highways meet in downtown Torrington: Route 8, Route 4, and Route 202. Other major roads include Route 183 and Route 272. The city is served by buses of the .

The have been a member of the (NECBL) since 1997. Torrington’s Fuessenich Park has generally seen the club be one of the larger crowd generators of the NECBL. Fuessenich Park has twice played host to the NECBL All-Star Game (1998, 2008). While they have never won an NECBL championship, the Twisters have placed high in their division and appeared in the post season many times. In addition, many Twister players have moved up to professional baseball ranks.

The Torrington Road Race is a five-mile (8 km) run, which coincides with Donor's Week in August. Starting at Coe Park, the course extends to the farther reaches of the valley, including Riverside Avenue, Migeon Avenue, Prospect Street and others. The race, which started in 1972, primarily includes runners from around Connecticut. Not the magnitude of the Litchfield Hills Road Race in neighboring Litchfield, the race peaked with 267 finishers in 2003. It has grown to have also attracted some runners each year from Massachusetts, New York, New Jersey and Pennsylvania.