Claudio Miguel Pizarro Bosio (born 3 October 1978 in Callao, Peru) is a Peruvian football forward. Pizarro plays for Werder Bremen of the German Bundesliga. He also plays for the Peru national team, for which he has 60 caps.

On 23 October 2010, Pizarro surpassed the 133 goals record previously reached by Giovane Elber, making him the top foreign scorer in German football history, when he scored with his team, Werder Bremen against Borussia Mönchengladbach.[1]

Pizarro started playing as a youth in the Academia Deportiva Cantolao in Callao. He started his professional career playing with Deportivo Pesquero, a small provincial team in the city of Chimbote in the north of Peru, at the age of seventeen. His first professional game was in 1996 against Alianza Lima. He scored his first two goals two weeks later against Atletico Torino in the victory of Deportivo Pesquero 2–1.

Pizarro scored 25 goals over two seasons with Alianza Lima and was part of the Alianza team that reached second position in the Torneo Apertura of Peru in 1999. Shortly after his success at Alianza, Pizarro was sold to German Bundesliga club Werder Bremen. Later that year, he earned his first cap for the Peru national football team.

Pizarro's 29 goals over two seasons for Werder Bremen made the rising star of Peruvian football more coveted by managers of major European clubs. After the 2000–01 season, Werder announced that it would not prevent Pizarro from moving to a bigger club, and the conflict to secure the Peruvian forward's services intensified. The media indicated that Real Madrid and Barcelona of Spain, Internazionale of Italy, and Werder's Bundesliga rivals Borussia Dortmund were in the running to sign Pizarro. The most speculated transfer in Peruvian football monopolized the interest of the national press. After seeming destined for Spain, Pizarro ended weeks of speculation by signing for Bayern Munich on 7 June 2001.

Pizarro was a key player in Bayern's Bundesliga and German Cup double in 2003.

The "Anden-Bomber" ("Andes Bomber", a reference to his South American home country as well as legendary Bayern striker Gerd Müller, who was nicknamed "Bomber") or sometimes called "Inca God" by the media, started well with Bayern Munich scoring his first goal with the Bavarian team in the fourth minute of the game against Schalke 04 (the second date of the Bundesliga 2001–02).

Pizarro's contract with the German champions expired at the end of the 2006–07 season and negotiations on an extension were not making progress, with Sevilla, Benfica and Rangers ready to step in and make a move. Pizarro later rejected a contract extension offered by Bayern chairman Franz Beckenbauer, demanding an increase in pay which angered Karl-Heinz Rummenigge who was quoted saying that "Anyone wishing to earn as much as Shevchenko had better start playing like Shevchenko."

On 20 May 2007, Bayern Munich announced Pizarro would be leaving the club.[2]

On 1 July 2007, Chelsea officially signed Pizarro and confirmed that he had completed his medical and agreed on personal terms to join the club on a Bosman transfer, signing a four-year deal.[3][4] He is the first Peruvian to sign for Chelsea. Pizarro also revealed that his decision was largely influenced by the advice of his national team team-mate Nolberto Solano, who played in England with Newcastle, Aston Villa and West Ham United, as well as Manchester United's Owen Hargreaves, who at the time also played for Bayern Munich.[5]

Pizarro was assigned the number 14, the same number he wears for Peru, and his former shirt number at Bayern Munich. He succeeded Geremi as the holder of the shirt number 14 at Chelsea. His Chelsea career got off to a good start, scoring a goal on his debut on the opening weekend of the 2007–08 Premier League season. However, after José Mourinho's departure, and the signing of French striker Nicolas Anelka, Pizarro found himself surplus to requirements by the then new manager Avram Grant. Pizarro did play an important role in Chelsea progressing to the fourth round of the FA Cup 2008, by contributing to the goal which rebounded off QPR keeper Lee Camp and into the net. He then went on to score the only goal in a match against Birmingham.

On 15 August 2008, he was loaned until the end of the season to Werder Bremen. Soon after the announcement that Pizarro would be joining the team, a large group of Werder Bremen fans lined up to buy the new Pizarro jersey showing that Pizarro is still appreciated in Bremen, seven years after leaving the club. He has been assigned the number 24 jersey and has been decisive and important for the club, scoring many goals.

Pizarro's role has been fundamental in the qualification of Werder to the UEFA Cup Final, helping score goals and eliminate teams such as A.C. Milan and German rivals Hamburg, amongst others. However with the absence of Werder playmaker Diego from the final with Shakhtar Donetsk, Pizarro could not save the team from a 2–1 defeat after extra time.

On 18 August 2009, Pizarro signed with Werder Bremen for an undisclosed fee after impressing for Werder in the previous season, scoring 17 goals in 26 appearances. In his second season at Werder Bremen, he continued to be a top Bundesliga scorer with 16 goals and reached the top foreign scorer record. On 23 October 2010, Pizarro scored his 134th goal in the Bundesliga making him the top scoring foreign-born player in the league history after being level with Giovane Elber. 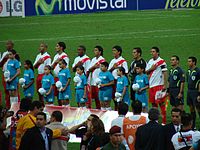 Pizarro has been a regular for Peru since 1999, and was the captain succeeding Nolberto Solano. His career in the national team has not mirrored his club career, as he has scored only 13 goals, only 6 of which have been in competitive matches. Pizarro has been a starting player in the qualifying tournaments for the 2002 Japan-Korea World Cup, the 2006 Germany World Cup, and the first three games of the 2010 South Africa World Cup. Fans of the Peruvian national team have complained of his lackluster performance in the qualifiers: only three goals scored throughout three tournaments.

In the Copa América 2004 when playing for the Peruvian National team he suffered a fractured skull, when he took an elbow to the head in an on-field collision during a 3–1 win over Venezuela which forced him out of the Copa America and required extensive surgery in Germany.[6] He was not able to play for over three months after the incident.

Under the management of Julio César Uribe, Pizarro played for Peru in the 2007 Copa América, scoring two goals against Bolivia.

On 7 December 2007, an investigation on having introduced women and alcohol into the national squad's hotel two days before Peru's away drubbing at the hands of Ecuador (5–1) started running, and Pizarro has thus been suspended 18 months from the national team starting on the day before the match.[7] Other Peruvian players based overseas like Jefferson Farfán and others were also suspended. Since Pizarro claimed to be innocent, he started a trial against the Peruvian Football Federation. This action alerted FIFA about the case who warned the player about not taking it to the regular judges or he could face an international ban.[8]

On 3 July 2008, after an investigation and a review of the facts, the suspension was changed to only three months (from the date of appeal in April 2008) and $10,000 fine. Pizarro served the three month ban.

On 17 April 2009, Pizarro won a court victory over his national federation. The Court of Arbitration for Sport overturned a $10,000 fine imposed on Pizarro by the Peruvian football association after the alleged November 2007 incident. "The facts put forward by (the federation) in relation to Pizarro were not supported by concrete evidence", sport's highest court said in a statement.[9]

Pizarro expressed his satisfaction with the final result. He explained: "I am very satisfied and feel vindicated, Pizarro said. "My honor has been restored. My family and friends have always stood by me and knew that these were all just lies that were being spread about me. But this verdict will now also give certainty to everyone who had doubts that I have always told the truth.[10]

Despite these results neither him nor any of the other suspended players were ever called for the duration of the World Cup South Africa qualification games by coach Del Solar. Pizarro's attitude as team captain had already been called into question by the fans, who felt he that he would focus more on his hobbies (such as horse racing) than training when he would go to Peru.

Pizarro was born and raised in the Santiago de Surco district of capital city Lima. He was born to Patricia Bosio and Claudio Pizarro Dávila, a naval officer. He has a sister, Patricia, and brother, Diego.[12] Younger brother, Diego,[13] was a youth player for Bayern Munich,[14] and he is currently playing for Peruvian First Division club Colegio Nacional Iquitos.

Pizarro is married to his teenage sweetheart, Karla Salcedo, and they have two sons, Claudio and Gianluca, and one daughter, Antonella.[15] Pizarro co-owns a race horse called 'Crying Lightning' with Queens Park Rangers player Joey Barton.[16] In January 2011 the horse competed at the Nad Al Sheba Racecourse in Dubai.[17]