Callao (Spanish pronunciation: [kaˈʎa.o] or [kaˈʝa.o]; English pronunciation: /kɑːˈjaʊ/) is the largest and most important port in Peru. The city is coterminous with the Constitutional Province of Callao, the only province of the Callao Region. Callao is located west of Lima, the country's capital, and is part of the Lima Metropolitan Area, a large metropolis that holds almost one-third of Peru's population. Callao borders Lima Province on the north, east and south, and the Pacific Ocean on the west.

Callao was founded by Spanish colonists in 1537, just two years after Lima (1535). It soon became the main port for Spanish commerce in the Pacific. The origin of its name is unknown; both Indian (particularly Yunga, or Coastal Peruvian) and Spanish sources are credited, but it is certain that it was known by that name since 1550.

At the height of the Viceroyalty, virtually all goods produced in Peru, Bolivia, and Argentina were carried over the Andes by mule to Callao, to be shipped to Panama, carried overland, and then transported on to Spain via Cuba.

On 20 August 1836, during the Peru-Bolivian Confederacy, President Andrés de Santa Cruz mandated the creation of the Callao Littoral Province (Provincia Litoral del Callao), which had political autonomy in its internal affairs. During the government of President Ramón Castilla, Callao was given the name of Constitutional Province (Provincia Constitucional), on 22 April 1857; before that, Callao had the name of Littoral Province. All of the other Peruvian provinces had been given their names by law, while Callao was given it by constitutional mandate.

Callao was never part of the Lima Department nor of any other departments.

By 1949, Callao was known as one of the biggest centers of coca-based products and cocaine traffic in the world.[2]

Callao is built on and around a peninsula, the district of La Punta, a wealthy residential neighborhood. An historical fortress, the Castillo de Real Felipe (site of "Rodil's Last Stand"), stands on the promontory overlooking the harbor.

A large naval base is sited in Callao. Its prison holds Abimael Guzmán, the leader of the Shining Path rebel movement, and Vladimiro Montesinos, the ex-director of internal security during the Fujimori regime.

On a bluff overlooking the harbor sits Colegio Militar Leoncio Prado, the military high school. The city also has a university, the National University of Callao.

Callao has several islands: San Lorenzo (currently a military base), El Frontón (a former high security prison), the Cavinzas, and the Palominos, where numerous sea lions and sea birds live in a virtually untouched ecosystem. There are proposed plans to build a huge naval, terrestrial, and air port on San Lorenzo Island. This project is called the San Lorenzo Megaport Project.

Residents of Callao are known as chalacos.

Jorge Chávez International Airport (IATA: LIM, ICAO: SPIM), known as Aeropuerto Internacional Jorge Chávez in Spanish, is Peru's main international and domestic airport. It is located in Callao, 11 km (6.8 mi) from the Historic Centre of Lima and 17 km (11 mi) from Miraflores. Callao is the port city now fully integrated with Lima, the nation's capital. In 2008, the airport handled 8,288,506 passengers and 98,733 aircraft movements.

For many years it was the hub for now defunct Aeroperú and Compañía de Aviación Faucett, one of the oldest airlines in Latin America. Now it serves as a hub for many aviation companies such as TACA Perú and LAN Perú 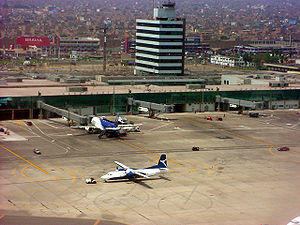 Local government affairs are divided into two levels. Regional matters are handled by the Regional Government of Callao (Gobierno Regional del Callao), which is located in the Bellavista District. Affairs such as city cleaning, promoting of sports and basic services are handled by the Provincial Municipality of Callao, which is headquartered in the Callao District. Also, each of the six districts has its own Municipality which handles matters in their respective jurisdictional areas.

Callao is divided into six districts, (Spanish: distritos; singular: distrito), each of which is headed by a mayor (alcalde).

* The rest of Callao Region is composed of the islands of San Lorenzo, El Frontón and Cavinzas, which all together have an area of 17.63 square kilometres (6.81 sq mi).