Marin was born in Bosanska Gradiška, SFR Yugoslavia to parents mother Borka and father Ranko.[3] Marin was only two years old when the family moved to Germany in 1991 due to his mother's job.[1] Growing up in Frankfurt, young Marko soon decided to take up football with local clubs. His childhood football idol was Dejan Savićević,[2] and his favorite team is Red Star Belgrade. 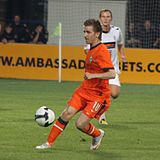 He began his footballing career as a youth player, first with SG 01 Hoechst and then with Eintracht Frankfurt.

In 2006 the player left Eintracht to move to Borussia Mönchengladbach youth academy. After a year at Mönchengladbach's academy he was offered a three year contract which he signed and later went on to make his professional debut with the club on 31 March 2007 against Eintracht Frankfurt. On 9 August 2008 Marin scored a hat-trick in Mönchengladbach's 8–1 thrashing of seventh division club VfB Fichte Bielefeld in the first round of the DFB Cup.

On 24 June 2009 he was sold for € 8.5 million from Borussia Mönchengladbach to Werder Bremen.

Reports surfaced in 2011 of the winger making a switch to numerous clubs but as yet Werder Bremen have received no contact from any clubs regarding his sale.

In 2010, Marin stated that he never received a call from Bosnia and Herzegovina, so he decided to play for Germany.[1][2]

In 2007 the player also received a call up to his under-21 national squad and has since played on 9 occasions. On 16 May 2008 it was announced that Marin would be included in German national team coach Joachim Löw's provisional 26-man squad for Euro 2008, but he did not make the final 23.[4] He made his debut on 27 May 2008 in a 2–2 draw against Belarus. Marin entered the game as a half-time substitution for Bastian Schweinsteiger. He was eventually cut from the final squad on 28 May 2008.

In the same year, on 20 August he made his second appearance for Germany and scored his first goal in a friendly match against Belgium. Marin is a German under-21 international football player, he was also picked for the European team in the UEFA-CAF Meridian Cup.[5][6]

Marko Marin was included in Germany's provisional squad for the 2010 FIFA World Cup in South Africa announced in May 2010, and following a string of impressive performances in warm-up games (most of which he played as a substitute),[citation needed] was named in the final 23-man squad. He would go on to play twice at the World Cup in South Africa, both as a substitute in Germany's 4–0 win over Australia and in the subsequent 1–0 loss to Serbia. However, after disappointing performances, notably in the game against Serbia,[citation needed] Marin was not selected for any more games in the tournament.