The Nissan S30 (sold in Japan as the Nissan Fairlady Z and in other markets as the Datsun 240Z, then later as the 260Z and 280Z) was the first generation of Z GT two-seat coupe, and later (beginning in the 1974 model year) also 2+2 hatchbacks produced by Nissan Motors, Ltd. of Japan from 1970 to 1978. It was designed by a team led by Mr. Yoshihiko Matsuo, the head of Nissan's Sports Car Styling Studio. HLS30 was the designation of the left-hand drive model and HS30 for the right-hand drive model.

All variants had a 4-wheel independent suspension consisted of MacPherson struts in front (borrowed from the Nissan Laurel C30) and Chapman struts in back. Front disc brakes and rear drums were standard.

The 240Z and 260Z used twin, variable venturi Hitachi one-barrel side-draft SU-like carburetors. The carburetors were changed beginning with model year 1973 to comply with emissions regulations, but the earlier carburetors were far superior for performance. Fuel injection (L-Jetronic electronic fuel injection, designed by Bosch) was added for the 280Z in 1975 for the US. This was primarily in order to cope with the difficulty faced in getting enough power using carburetors while still meeting US emissions regulations.

Due to its relatively low price compared to other foreign sports cars of the time (Jaguar, BMW, Porsche, etc.), it became popular in the United States and was a major success for the Nissan Motor Corporation, which at the time sold cars in North America under the name Datsun. The 240Z also broadened the image of Japanese car-makers beyond their econobox success.

Continuing through the 1975-1978 model years, other non-USA markets still received the 260Z coupe and the 260Z 2+2 hatchback — the two-door, four-seat model. The S30 240Z is essentially unrelated to the later 240SX, which is sold as the Silvia in Japan, although initial advertising for the 240SX mentioned the S30.

The 1970 240Z was introduced to the American market by Yutaka Katayama, president of Nissan Motors USA operations, widely known as Mr. K. The 1970 through the mid-1971 model year 240Z was referred to as the Series I. These early cars had many subtle but notable features differing from later cars. The most easily visible difference is that these early cars had a chrome "240Z" badge on the sail pillar, and two horizontal vents in the rear hatch below the glass molding providing flow through ventilation. In mid-1971, for the Series II 240Z cars, the sail pillar emblems were restyled with just the letter "Z" placed in a circular vented emblem, and the vents were eliminated from the hatch panel of the car. Design changes for the U.S. model 240Z occurred throughout production, including interior modifications for the 1972 model year, and a change in the location of the bumper over-riders, as well as the addition of some emission control devices and the adoption of a new style of emissions reducing (and performance compromising) carburetors for the 1973 model year.[1]

The 1970 models were introduced in October 1969, received the L24 2.4 liter engine and a 4-speed manual. A less common 3-speed automatic transmission was optional from 1971 on, and had a "Nissan Full Automatic" badge.

In 2004, Sports Car International named this car number two on the list of Top Sports Cars of the 1970s. One of the most appealing Japanese cars ever produced, it nevertheless disappeared almost entirely from American roads within two decades, presumably because like most Japanese cars of the time it had insurmountable rust issues.

This model was sold in the United States for the 1974 model year only, but was available in other countries until 1978. The engine was enlarged over that of the 240Z with a longer stroke to 2.6 L. In the U.S., federal emissions regulations forced a reduction in ignition timing and compression ratio, resulting in a lower power output (140 hp) for the 260Z's despite the additional displacement, whereas in other countries the power output increased to 165 bhp (123 kW; 167 PS). A 3-speed automatic transmission was an option, and the 4-speed manual remained standard.

1974 brought for the first time to the S30 line a new 2/2 (2+2) seating option, which offered room for 4 passengers and an extra 11.9 in (302 mm) of wheelbase. These cars have a notably different roofline from the 2 seat coupes, incorporating larger opening quarter panel windows.

The 260Z claimed a few updates or improvements or over the 240Z. The climate controls were more sensibly laid out and easier to work, and those cars with air conditioning now had the A/C system integrated into the main climate control panel. There was also additional stiffness in the chassis due to a redesign of the chassis rails which were larger and extended further back than previous models. The 260Z debuted a redesigned dashboard and console, as well as new seat trim, and door panels for the interior. The rear tail lights were updated, moving the reverse lights from the main tail light housing to the back panel. Early 1974 U.S. 260Z models had bumpers that resembled those of the earlier 240Z, though increased slightly in size, pushed away from the body somewhat, and wearing black rubber bumper guards rather that the previous chrome bumper guards with rubber strips. These early cars still had the front turn signals located below the bumpers. Late 1974 U.S. 260Z models (often referred to as 1974.5 models) carried the heavier bumpers that would remain on the 1975-76 model years of the 280Z. These late cars had the front turn signals relocated to the outer edges of the front grill, above the bumper. 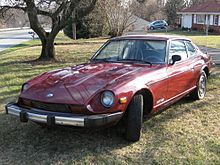 In a further effort to keep the S30 models sporting in the face of increasingly stringent U.S. emission and safety requirements, Nissan Motors released the Datsun 280Z model for the U.S. market in the 1975 model year. Both the 2 seat coupe and 2/2 (2+2) hatchback models remained available throughout the 1975-78 model year run of the 280Z.

For the 280Z, engine size was again increased, this time to 2.8 L, by enlarging the bore of the L26 engine to create the L28, and a reliable Bosch L-Jetronic fuel injection system was added.

1975 and 1976 models continued to be fitted with the Federally required 5 mph (8.0 km/h) crash test bumpers that were introduced for the mid-1974 model year of the 260z. These bumpers were smooth surfaced, and blended into smooth black rubber extensions as they met the body of the car. 1977 and 1978 models received bumpers with recessed channels added to the faces of the bumpers themselves, that blended into corrugated or accordion style black rubber extension trim. Also new for the 1977 model year, 280Zs no longer received the full size spare tire, and instead had a "space saver" spare and a larger fuel tank. This resulted in a raised rear deck area made of fiberboard, reducing cargo space. In 1977-78 an optional 5-speed manual transmission was available along side the 4-speed manual, and the 3-speed automatic options, which included a "5-speed" emblem on the left bottom edge of the rear hatch. 1977 also saw an update from the charcoal painted hubcap style (with a chrome Z floating in the amber center emblems) to a hubcap that resembled an alloy wheel, bearing a center cap with a chrome Z floating in a black circle.

In 1977 and 1978 respectively, Datsun offered two special edition models. The "Zap" edition was offered in 1977 as a "Special Decor Package". Zap cars were finished in Sunshine Yellow paint, and sported black stripes down the center and sides, with yellow, red, and orange chevrons at the front ends of the stripes. An estimated 1,000 "Zap Z" cars were offered in 1977. The "Zap Z" model was also used as the pace car in the 1977 Long Beach Gran Prix. The Black Pearl edition (produced in 1978) came with Black Pearlescent paint and a "Special Appearance Package" (SAP), which consisted of dual racing mirrors, rear window louvers, and a unique red and silver stripe. It is estimated that between 750-1,500 of these cars were produced.

The Japan-only HS30-H Nissan Fairlady ZG was released in Japan in October 1971 to homologate the 240Z for Group 4 racing. Differences between the Fairlady ZG and an export market Datsun 240Z include an extended fiberglass ‘aero-dyna’ nose, wider over-fenders riveted to the body, a rear spoiler, acrylic glass headlight covers and fender mounted rear view mirrors. The Fairlady ZG was available in three colours: Grande Prix Red, Grande Prix White and Grande Prix Maroon. The "G" in Fairlady ZG stands for "Grande." Although the ZG was not sold in the USA and was never sold outside Japan, in order for it to be eligible for competition in the U.S., Nissan sold the nose kit as a dealer's option which is known as the "G-nose". With the nose added, these 240Zs are often referred to as 240ZGs, outside of Japan.

Packaging the 160 hp (119 kW) S20 engine (originally designed by the former Prince engineers) from the Skyline GT-R created a go-fast Fairlady. The Z432 (PS30) referred to 4 valves per cylinder, 3 carburetors, and 2 cams. Approximately 420 were built. Some were used by Police in Japan.[1]

A Japan-only model Fairlady Z equipped with the twin cam 2.0 L inline 6 cylinder "S20" engine shared with the KPGC10 Skyline GT-R was released in the JDM Market for homologation purposes (the car was a rally car). The Z432R was orange with black steel wheels and a low luster black hood. Z432R had lighter front guards, doors, and bonnet, as well as further engine enhancements compared to the Z432.

The Z was very successful in racing in the 1970s: Bob Sharp Racing in the eastern US with Paul Newman as one of his drivers; and Brock Racing Enterprises (BRE) in the western US with John Morton driving a Datsun 510 and 240Z (#46). Other drivers, such as Clearwater Florida (and later Maryland) racer Don Kearney had much success with the Z car between 1970 and 1978. The Z is also credited as a catalyst for the import performance parts industry. Nissan also supported and was associated with Bob Bondurant's race driving school from its inception.

The most common conversion is to replace the 2.4 or 2.6 liter engine with the L28 2.8 liter engine from the later model 280Z/280ZX. Turbo 280ZX L28s can be retrofitted into earlier cars using the later wiring harness and associated parts.

The S30s are popular for Skyline RB25DET/RB26DETT swaps, with numerous kits available.

The S30 has also proven to be a popular and affordable basis for V8 and other engine conversions, usually a Chevrolet Small-Block engine or Ford. Several vendors make kits and informational books to allow the conversion to be done as a nearly bolt-in process.

The 280Z, although relatively heavy and smog-controlled in stock form due to government regulations, is easily modified. For instance, simply removing the heavy front bumper and adding a front spoiler corrects the otherwise jittery high-speed handling of the stock version. Replacement of stock bumpers with those from the 240z, along with removal of spare tire, jack, and air conditioning system can lighten a 280z by nearly 200 lb (91 kg). Some of the weight gain of a 280z is actually a benefit over the 240z such as a much stronger Nissan R200 rear differential replacing the R180 in the 240z, and the addition of a rear sway bar. Further, a great variety of aftermarket parts are available to, in effect, bring the 280Z back in line with the ethic of the early Z-cars, such as free-flowing exhaust/header kits and the installation of a 280ZX turbo turbocharger.

From 1996 to 2002 Nissan did not offer the Z car line except in Japan where they sold the 300ZX (Z32) until 2000 as the Fairlady Z. In 1998 Nissan launched a program to bring back the Z car line. They began to purchase original 240Zs and restore them to factory specifications and sell them to dealerships for $24,000. This was in efforts to keep Z-interest alive. Furthermore, in 1999 a concept car was shown to the public in a plan to return to the fundamentals that made the 240Z a market success.