The Nissan Tiida is a compact car, manufactured by Japanese automaker Nissan, replacing the Pulsar and the Sunny, and marketed also as the Nissan Versa, prominently in the United States. It is the successor of the Nissan Almera in some parts of Europe.

The Tiida is based on a stretched-wheelbase variant of the Nissan B platform[5] and is manufactured as a five-door hatchback and a four-door sedan marketed as the Nissan Tiida Latio.

In mainland China, the Tiida is produced by the Dongfeng Motor Company, a joint venture between Nissan and a local company. In Taiwan it is produced by Yulon. It arrived in some Eastern European countries in late 2007, replacing the Almera small family car.

The Nissan Tiida debuted in 2004 in Japan, and in select European countries in 2007. In January 2008, Nissan introduced the facelifted Nissan Tiida (hatchback) and Tiida Latio (sedan).

The five-door hatchback Tiida and four-door sedan Tiida Latio have been enhanced with some key changes including new exterior features and interior designs, retuned power steering, powertrain enhancements and a new Plus navi HDD package.

Engines include a 1.5-litre or 1.8-litre four-cylinder engine, the larger of which can be coupled to a six-speed manual transmission. There are also two optional dealer packages: the Nismo S-tune Aero Package and Nismo Performance Package.

The prototype vehicle was unveiled in Nissan's Yokohama headquarters in 2009-08-02. Production version was set to begin sale in U.S. and Japan in 2010.[6]

The Versa was introduced in the United States and Canada in July 2006 as a 2007 model. North and Latin American models of the Tiida use a DOHC 1.8-liter gasoline engine and are assembled at Nissan's Aguascalientes, Mexico assembly plant. It is also the only Nissan four-door passenger car in the United States and Canada to be sold worldwide, since the Sentra (not the Asian version), Altima and Maxima (not the Australian Maxima, a rebadged Teana) are exclusive to North America.

The Versa is Nissan's current entry-level model in the United States and Canada.[7] The Versa is marketed as a subcompact, competing against the Honda Fit and Toyota Yaris.[8]

The North American Versa debuted at the 2006 North American International Auto Show in January of the same year. The hatchback model was introduced first, with the sedan arriving later at the end of the year, both as 2007 models. A 1.6-litre sedan replaced the 1.8 sedan in Canada for the 2009 model year, that year in the United States the 1.6 sedan was added to the lineup along the 1.8 sedan.

The Versa is powered by a 1.8 L I4 MR series engine producing 122 hp (91 kW) and 127 ft·lbf (170 N·m).[8] Three transmissions are offered: a four-speed automatic, a continuously variable transmission, and a six-speed manual. It is one of two cars in its class (in the North American market) to offer a six-speed manual transmission as standard equipment (next to the 2012 Hyundai Accent). Two trim levels include the S and SL—the SL offering air conditioning, power accessories and ABS, all of which are options on the S. The Versa SL also has features/options not available on the S such as cruise control (available on some S models), alloy wheels, optional CVT (the 4-speed automatic is only available for the Versa S but CVT is available on some S models), optional Bluetooth connectivity for electronic devices, and a sport package which adds a power moonroof, rear spoiler, and underside aero kit.

2010 models featured a redesigned grille and a new design for the 1.8S model's wheel covers.

Introduced for the 2009 model year in sedan form only, it uses a smaller, 1.6-liter (HR16DE) gasoline engine. Base transmission is a five-speed manual; a four-speed automatic is optional.

When it was introduced in fall 2008, the Versa's base price of US$9,990 made it the least expensive new car available in the United States,[9] but a price cut to the Hyundai Accent usurped that distinction by $20. The Versa 1.6's $12,498 Canadian base price also undercut its competitors at launch.[10]

In 2007, the first European countries began receiving imports of the Tiida. Although it has not been officially launched in the United Kingdom, some cars destined for the Irish market have been sold in the UK by Arnold Clark dealerships as grey imports since March 2009, with the only difference between the imports and Irish domestic market vehicles being the speedometer and odometer to accommodate Imperial units in contrast to Metric units used in Ireland.[11]

The second generation of the Nissan Tiida was unveiled in April 2011 at the Shanghai Auto Show. It will be sold only as a 5-door hatchback at first, but a sedan variant may be in the works. Instead of being marketed as both a subcompact or a compact car depending on the country, it will be marketed as a C-segment worldwide as the March/Micra will take the place of the B-segment markets.[12] The hatch is available with the 188 hp turbocharged 1.6L four-cylinder petrol engine with gasoline direct injection paired with a CVT transmission, other engines will be announced closer to the release date.[13] The new Tiida will be available in the US and as of May 2011 it has been confirmed that it will be the next Versa hatchback. In Mexico, the Tiida name is dropped in favour of Versa. 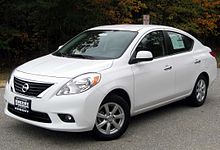 The second generation Versa was unveiled at the 2011 New York Auto Show. The sedan version is no longer based on the Tiida, but instead it will be based on the Micra. The US-spec model unveiled at the motorshow was the sedan previously shown in December 2010 in China under the Sunny nameplate. It continues to compete with the likes of other entry-level sedans such as the Ford Fiesta, Chevrolet Sonic, Hyundai Accent, and Toyota Yaris. However, the hatchback will continue to be based on the Tiida and it will be larger and more upscale in order to compete with larger hatchbacks like the Ford Focus 5-door, Hyundai Elantra Touring, and the new Chevrolet Cruze hatchback. The second generation Versa sedan is powered by a 1.6-litre petrol that delivers around 80 kW (109 hp) and 145Nm (107 lb-ft) of torque, but the hatchback will likely get a larger non-turbocharged base engine with higher horsepower/torque figures to go along with the 188 hp turbocharged 1.6L engine. The new model weighs less and has gained more legroom compared to its predecessor. It will likely start much higher than the sedan's base price of $10,990, while it will also include Bluetooth, navigation system with 5-inch touch-screen display, Satellite Radio and an iPod®/USB interface.[14] The fuel economy is estimated to be 30 mpg city and 37 mpg highway with the CVT-equipped Versa sedan, but the hatchback's numbers are unknown at this point.[15]