Drew McQueen Bledsoe (born February 14, 1972)[2] is a former football quarterback in the National Football League, best known as the starting quarterback for the New England Patriots from 1993-2001. During the 1990s, he was considered the face of the Patriots franchise. Bledsoe, a Pro Bowler, All-American for the Washington State Cougars and #1 overall draft pick in the 1993 NFL Draft, announced his retirement from the sport on April 11, 2007.[3]

Bledsoe attended Walla Walla High School in Walla Walla, Washington, and was a letterman in football and basketball. In football, he was named a first team All-State selection by the Tacoma News Tribune.

Bledsoe only stayed at Washington State for 3 years but still managed to put together a record-setting career. After gaining the starting job in the end of the 1990 season as a true freshman, he quickly became the face of the Cougars offense. In 1992 Bledsoe led his team to a 9-3 record (ranking #17 in the coaches poll and #15 in the AP) and a 31-28 win against the Utah Utes in the Copper Bowl, Bledsoe completed 30-46 passes for 476 yards and 2 TDs in the game. He also established WSU records in single-game passing yards (476), single-season pass completions (241), and single-season passing yards (3,246). He was named the Pac-10 Offensive Player of the Year.

Following an impressive junior year Bledsoe decided to forgo his senior season and enter the 1993 NFL Draft. In the 28 starts of his collegiate career he amassed 7,373 yards, 532 completions and 46 touchdowns.[4] 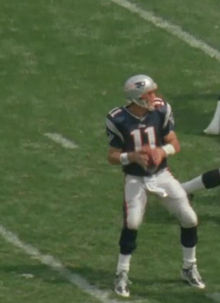 Bledsoe in 2001, during his tenure with the Patriots.

Bledsoe was drafted first overall in the 1993 NFL Draft by the New England Patriots. He started right away for the Patriots in his rookie season, as they improved from two to five wins.

On November 13, 1994, the Patriots had won just three of their first nine games and were losing 20-3 to the Minnesota Vikings at halftime. Bledsoe led a comeback victory in which the Patriots won 26-20 in overtime, as he set single game records in pass completions (45) and attempts (70).[5] By remaining undefeated throughout the succeeding games, the Patriots earned their first postseason appearance in eight years.[6] Bledsoe started all 16 games that season and went on to set a NFL record in pass attempts (691), becoming the second NFL quarterback to complete 400 or more passes in a season (400), and led the league in passing yards (4,555).[7] Due to his performance, Bledsoe was selected to his first Pro Bowl as an alternate.

Following a difficult 1995 season, Bledsoe turned it around in 1996 ranking among the top passers in the league with the help of wide receiver Terry Glenn, thus pushing the Patriots to reach the playoffs again and winning the AFC championship against the Jacksonville Jaguars 20-6. This led to an appearance in Super Bowl XXXI, where they lost to the Green Bay Packers by the score of 35-21. Bledsoe completed 25 of 48 passes for 253 yards, with two touchdowns and four interceptions in the loss. He was also named a starter for the Pro Bowl that season, the second of his career.

During the 1997 season, Bledsoe helped the Patriots win five of their final seven games to once again qualify for the playoffs, the fourth time in eight years as a Patriots starter he would lead the team to a postseason appearance. The Patriots lost in the second round to the Pittsburgh Steelers, however Bledsoe built a career-high 87.7 passer rating, passed for 3706 yards, tossed 28 Touchdowns, and earned his third Pro Bowl invitation.

The following year, he became the first NFL quarterback to complete game-winning touchdown passes in the final 30 seconds of two consecutive games.[8] In doing so, he propelled New England into the postseason for the third straight year. He completed these come-from-behind efforts while playing with a broken index finger on his throwing hand, an injury that would later sideline him for the postseason.

Bledsoe started the 1999 season very strongly, with 13 touchdowns and only four interceptions as the Patriots held a 6-2 mid-season record. However, Bledsoe subsequently threw only six touchdowns versus 17 interceptions, and the team faltered to an 8-8 record. The slide continued into 2000's 5-11 season. While Bledsoe threw a career low 13 interceptions that year, he was sacked 45 times.

Nonetheless, in March 2001, Bledsoe was signed to a then-record ten-year, $103 million contract.[9] Bledsoe did not, however, finish his career with the Patriots, nor even see the opening of the new Gillette Stadium. During the second game of the 2001 season, Bledsoe was hit by New York Jets linebacker Mo Lewis and suffered a sheared blood vessel in his chest. Replacing Bledsoe at quarterback, soon-to-be superstar All-Pro quarterback Tom Brady led the Patriots to an eventual Super Bowl championship. Though he never regained his starting role, Bledsoe nevertheless proved integral to his team's playoff run when he replaced a hobbled Brady in the AFC Championship Game against Pittsburgh. Bledsoe, starting from the Steelers 40 yard line, capped a scoring drive with an 11-yard touchdown pass to David Patten to seal a 24-17 victory. In gaining the conference title Bledsoe completed 10 of 21 passes for 102 yards and a touchdown, with no interceptions.[10]

Appreciative of his lengthy tenure with the team, Patriots fans cheered Bledsoe in each of his three returns to New England as a visiting player.

Bledsoe's #11 jersey was not re-issued until the 2009 season, when Julian Edelman took the number.

On May 16, 2011, Bledsoe was voted by Patriots fans into the Patriots Hall of Fame.[11] He was formally inducted in a public ceremony outside The Hall at Patriot Place on September 17, 2011. Bledsoe beat former head coach Bill Parcells and defensive lineman Houston Antwine in a fan vote.

A change of scenery—by way of a trade[12]—to Bledsoe's former division rival Buffalo seemed to give him a bit of rejuvenation in 2002. He had one of his best seasons ever, passing for 4,359 yards and 24 touchdowns and making his fourth trip to the Pro Bowl. In Week 2 against the Minnesota Vikings, Bledsoe set a team record with 463 yards passing in an overtime win. He continued his strong play in 2003 as the Bills began the year 2-0. However, a flurry of injuries stymied the Bills offense; they failed to score a touchdown in three consecutive games en route to a 6-10 season. In 2004, they fell one game short of making the playoffs; a late season winning streak went for naught when Bledsoe and the Bills performed poorly against the Pittsburgh Steelers backups in the season finale.[13]

Bledsoe went on to sign with the Dallas Cowboys, where he was reunited with former coach Bill Parcells. During his tenure with the Cowboys, he threw for over 3,000 yards in a season for the ninth time in his career, tying Warren Moon for fourth in NFL history. That season, Bledsoe led five 4th quarter/OT game-winning drives to keep the Cowboys’ playoff hopes alive until the final day of the season.[14] Though the team ultimately failed to reach the playoffs, Bledsoe had led them to a 9-7 record, an improvement over the 6-10 mark that Vinny Testaverde had finished with in 2004.

However, in 2006, his final season with the Cowboys, Bledsoe's play became erratic, so much so that six games into the season he was replaced by then-backup and soon to be Pro Bowler Tony Romo. Shortly after the end of the 2006 season, Bledsoe was released by the Cowboys. Unwilling to be relegated to a backup position, Bledsoe announced his retirement from the NFL on April 11, 2007.[3]

Drew and his wife Maura live in Bend, Oregon and have four children: sons Stuart, John and Henry, and daughter Healy. He coaches his sons', Stuart and John's, football team named the Seahawks.[15]

After his retirement in 2007, Bledsoe founded the Doubleback Winery along with close friend Chris Figgins. The company's grapes are harvested from McQueen Vineyards and Flying B Vineyards, located in and around Walla Walla, Washington. The wine has had success recently, placing 53rd overall in Wine Spectator's Top 100 wines.[16] His first vintage which was 2007 vintage quickly sold out of its initial 600 cases.[17]

Bledsoe also has a vested interest in Bledsoe Capital Group, which is committed to facilitating the capitalization, development, and marketing of its diverse holdings and investments.

In his spare time, he also works with many philanthropic organizations.[15]

While Bledsoe's has thrown for a high number of yards and attempts, a frequent criticism is that they are based on volume (attempts, completions, yards) rather than efficiency (passer rating, TD-to-INT ratio, yards per attempt) proving only that he has thrown a great number of times, not that he has thrown well.[18] According to Don Banks of Sports Illustrated, Bledsoe's large career totals "reveal more about his longevity than about his excellence".[19]

Bledsoe ranks fifth all-time in completions (3,839), seventh in passing yards (44,611), and 13th in touchdown passes (251). Bledsoe's career (57.2) completion percentage is lower than all recent Hall of Fame quarterbacks with the exception of John Elway. Bledsoe's NFL career passer rating of (77.1) surpasses nine Hall of Fame Quarterbacks. Bledsoe's 37 regular season 300-yard passing games ranks 9th in league history. He also ranks 6th (with 6) in most career regular season 400-yard passing games by NFL quarterback. He was selected to the Pro Bowl four times (in 1994, 1996, 1997, 2002). Bledsoe will be eligible for the Pro Football Hall of Fame in 2011.