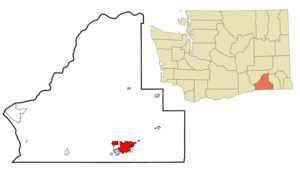 Walla Walla is both the of Walla Walla County, , and the county's largest city. As of the 2000 census, the city population was 29,686GR|6. Walla Walla is in the southeastern region of Washington, approximately five hours by car from and thirteen miles from the border.

Walla Walla is famous for its s. Many are located in the area and it is a popular vacation spot for wine enthusiasts.

On , , arrived with his wife . Here they established the Whitman Mission in an unsuccessful attempt to convert the local Walla Walla tribe to . Following a disease epidemic, both were killed by the who believed that the missionaries were poisoning the native peoples. was established in their honor. The original Fort Walla Walla, a major stopping point for migrants moving West, has been preserved with many of the original buildings. The current Fort Walla Walla contains these buildings, albeit in a different location from the original, as well as a museum about the early settlers' lives.

Walla Walla was officially incorporated on , . As a result of a , during this decade the city became the largest community in the territory of Washington, at one point slated to be the new state's capital. The former Governor's mansion still stands in the southern part of the city. Following this period of rapid growth, agriculture became the city's primary industry.

On , , the city was hit with a vicious windstorm toppling many trees. [http://www.union-bulletin.com/articles/2008/01/04/local_news/local01.txt] Radio communication during the storm indicated that much, if not all, of the city was without power.

*cite book|author=MacGibbon, Elma|title=Leaves of knowledge|publisher=Shaw & Borden Co|year=1904 [http://www.secstate.wa.gov/history/publications%5Fdetail.aspx?p=63 Available online through the Washington State Library's Classics in Washington History collection] Elma MacGibbons reminiscences of her travels in the United States starting in 1898, which were mainly in Oregon and Washington. Includes chapter "Walla Walla and southeastern Washington."

Though wheat is still a big crop, vineyards and wineries have become economically important over the last two decades. In summer 2006, there were over 100 wineries in the greater Walla Walla area. Following the wine boom, the town has developed several top-tier restaurants and hotels. The Marcus Whitman hotel, one of Washington's finest early 1900s hotels, was recently renovated with its original fixtures and furnitures. It is the tallest building in the city, reaching thirteen stories.

From asparagus and corn to cherries and strawberries, Walla Walla growers produce produce that is available to visitors at the farmers' market from May until October; located on the corner of 4th and Main. A selection of bakery treats, flowers and plants, creative arts, and craft items are also on sale at the farmers' market open 9:00am to 1:00pm both Saturday and Sunday.

Another historic creation that occurred in Walla Walla, specifically at , was the birth of the known as . Dr. , the creator of the card game, came to teach at in 1993. He worked in his spare time with local volunteer playtesters to help refine the game during the 1993 school year. After releasing the game publicly, he worked with .

In 1972, Walla Walla established a relationship with Sasayama, .

Walla Walla has experienced an explosion in its wine industry over the last two decades. Producing some of the finest s, Walla Walla is quickly becoming a destination for connoisseurs the world over. Several of the wineries have received top scores from wine publications such as "", "" and "Wine and Spirits". L'Ecole 41, Woodward Canyon and Leonetti Cellar were the pioneers starting in the 1970s and 1980s. They have been joined by many noteworthy producers like Walla Walla Village Winery, Cayuse Vineyards, Spring Valley Vineyards, Waterbrook Winery, Forgeron Cellars, Tamarack Cellars, Seven Hills Winery, Pepper Bridge Winery, Amavi Cellars, and Walla Walla Vintners as well as dozens more smaller wineries. Although most of the early recognition went to the wines made from Merlot and Cabernet, Syrah is fast becoming a star varietal in this appellation. Today there are over 100 wineries in the Walla Walla Valley and a host of shops catering to the wine industry.

Walla Walla Community College capitalizes on the opportunity to market the wine industry. The school offers an associate's degree in winemaking through its 4-year-old Institute of Enology and Viticulture, which operates its own commercial .

One challenge to growing grapes in Walla Walla Valley is the risk of a killing freeze during the winter. They average one every six or seven years and the last one, in 2004, destroyed about 75% of the wine grape crop in the valley.

The wineries generate over $100 million (US) to the valley annually.

The largest prison in Washington is the located in Walla Walla. Originally opened in 1887, it now houses about 2000 offenders. In addition, there are about 1000 staff members. In 2005, the financial benefit to the local economy was estimated to be about $55 million through salaries, medical services, utilities, and local purchases. Washington is a state, and occasional executions take place at the state pen, though the last execution took place in 2001. The penitentiary is undergoing an extensive expansion project that will increase the prison population to 2,500 violent offenders and double the staff size.

Transportation to Walla Walla includes service by air through and highway access primarily from U.S. Route 12. Washington State Department of Transportation is now engaged in a long-term process of widening this road into a four-lane divided highway between and Walla Walla. The city is also served by a local bus system.

Proud residents of the town often brag about it as "the town so nice they named it twice." [ [http://archives.seattletimes.nwsource.com/cgi-bin/texis.cgi/web/vortex/display?slug=nwwwallawalla23&date=20041223&query=town+nice+named+twice Travel & Outdoors | Here's to you, Walla Walla | Seattle Times Newspaper ] ] Walla Walla is a Native American name that means "Place of Many Waters." The original name of the town was Steptoeville named after Colonel Steptoe. [ [http://www.nwsource.com/travel/scr/tf_detail.cfm?dt=3290 NWsource: Travel - Walla Walla, Washington Introduction : Overview ] ]

Of the 10,596 counted households, 30.6% have children under the age of 18 living with them, 46.4% are married couples living together, 11.0% have a female householder with no husband present, and 38.4% are considered non-families by the U.S. government. 31.9% of all households are made up of individuals and 15.1% have someone living alone who is 65 years of age or older. The average household size is 2.44 and the average family size is 3.08.

Among references in popular culture, Walla Walla is mentioned in two different cartoons. The city is said to be the location for the headquarters of the fictional Little Giant Vacuum Cleaner Company in the 1953 animated short film "A Mouse Divided". In the short "Transylvania 6-5000", which was released ten years later, the name of the city is used as a magic incantation by Bugs Bunny to change a vampire into a two-headed vulture.

American punk rock band also wrote a song called Walla Walla about the nearby state penitentiary in "", their fifth album.