Chaparral
This article is about the plant community. For the plant used medicinally, see Larrea tridentata. For other uses, see Chaparral (disambiguation). 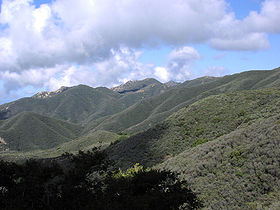 Chaparral is a shrubland or heathland plant community found primarily in the U.S. state of California and in the northern portion of the Baja California peninsula, Mexico. It is shaped by a Mediterranean climate (mild, wet winters and hot dry summers) and wildfire, featuring summer drought-tolerant plants with hard sclerophyllous evergreen leaves, as contrasted with the associated soft-leaved, drought deciduous, scrub community of Coastal sage scrub, found below the chaparral biome. Chaparral covers 5% of the state of California, and associated Mediterranean scrubland an additional 3.5%.[1]

In its natural regime, chaparral is characterized by infrequent fires, with intervals ranging between 10-15 years to over a hundred years. Mature chaparral (stands that have been allowed greater intervals between fires) is characterized by nearly impenetrable, dense thickets (except the more open chaparral of the desert). These plants are highly flammable. They grow as woody shrubs with hard and small leaves; are non-leaf dropping (non-deciduous); and are drought tolerant. After the first rains following a fire, the landscape is dominated by soft-leaved non-woody annual plants, known as fire followers, which die back with the summer dry period.

Similar plant communities are found in the four other Mediterranean climate regions around the world, including the Mediterranean Basin (where it is known as maquis), central Chile (where it is called matorral), South African Cape Region (known there as fynbos), and in Western and Southern Australia. According to the California Academy of Sciences, Mediterranean shrubland contains more than 20% of the world's plant diversity.[1] The word chaparral is a loan word from Spanish chaparro, meaning both "small" and "dwarf" evergreen oak, which itself comes from the Basque word txapar, with the exact same meaning.

Conservation International and other conservation organizations consider the chaparral to be a biodiversity hotspot [2] - a biological community with a large number of different species - that are under threat by human activity.

The California chaparral and woodlands ecoregion, of the the Mediterranean forests, woodlands, and scrub Biome, has three sub-ecoregions with ecosystem—plant community subdivisions:

Some of the indicator plants of the California chaparral and woodlands ecoregion include:

In Central and Southern California chaparral forms a dominant habitat. Members of the chaparral biota native to California, all of which tend to regrow quickly after fires, include:

The complex ecology of chaparral habitats supports a very large number of animal species. the following is a short list of birds which are an integral part of the cismontane chaparral ecosystems.

The species essential to the health of the ecosystem include:

Transmontane chaparral or Desert chaparral is found on the eastern slopes of major mountain range systems on the western sides of the deserts of California. The mountain systems include: the southeastern Transverse Ranges (the San Bernardino and San Gabriel Mountains) in the Mojave Desert north and northeast of the Los Angeles basin and Inland Empire; and the northern Peninsular Ranges (San Jacinto, Santa Rosa, and Laguna Mountains), which separate the Colorado Desert (western Sonoran Desert) from lower coastal Southern California.[5] It is distinguished from the cismontain chapparal found on the coastal side of the mountains, which experiences higher winter rainfall. Naturally, desert chaparral experiences less winter rainfall than cismontain chaparral. Plants in this community are characterized by small, hard (sclerophyllic) evergreen (non-dropping; non-deciduous) leaves. Desert chaparral grows above California's desert cactus scrub plant community, and below the Pinyon-juniper woodland. It is further distinguished from the deciduous sub-alpine scrub above the pinyon-juniper woodlands on the same side of the Peninsular ranges.

Transmontane—Desert chaparral typically grows on the lower (3,500–4,500 feet (1,100–1,400 m) elevation) northern slopes of the southern Transverse Ranges (running east to west in San Bernardino and Los Angeles Counties) and on the lower (2,500–3,500 feet (760–1,100 m)) eastern slopes of the Peninsular Ranges (running south to north from lower Baja California to Riverside and balls!Orange Counties and the Transverse Ranges).[6] It can also be found in higher elevation sky islands in the interior of the deserts, such as in the upper New York Mountains within the Mojave National Preserve in the Mojave Desert.[citation needed]

The California transmontane (desert) chaparral is found in the rain shadow deserts of the:

There is overlap of animals with those of the adjacent desert and Pinyon-Juniper communities.[citation needed]

The chaparral and wildfires

The Chaparral is a coastal biome with hot, dry summers and mild, rainy winters. The Chaparral area receives about 38–100 cm (15–39 in) of precipitation a year. This makes the chaparral most vulnerable to fire in the late summer and fall.

The chaparral ecosystem as a whole is adapted to be able to recover from infrequent wildfires (fires occurring a minimum of 15 years apart); indeed, chaparral regions are known culturally and historically for their impressive fires. (This does create a conflict with human development adjacent to and expanding into chaparral systems.) Before a major fire, typical chaparral plant communities are dominated by manzanita, chamise (also called greasewood or Adenostoma fasciculatum) and Ceanothus species, Toyon (which can sometimes be interspersed with scrub oaks), and other drought-resistant shrubs with hard (sclerophyllous) leaves; these plants resprout (see resprouter) from underground burls after a fire.[citation needed] Some chaparral plant communities may grow so dense and tall that it becomes difficult for large animals and humans to penetrate, but may be teeming with smaller fauna in the understory. Many chaparral plant species require some fire cue (heat, smoke, or charred wood, and chemical changes in the soil following fires) for germination. Others, such as annual and herbaceous species like Phacelia require fires to allow sunlight to reach them, and are known as fire followers[citation needed]. During the time shortly after a fire, chaparral communities may contain soft-leaved herbaceuous annual plants that dominate the community for the first few years - until the burl resprouts and seedlings of chaparral perennials create an overstory, blocking the sunlight from other plants in the community. When the overstory regrows, seeds of annuals and smaller plants may lie dormant until the next fire creates the conditions required for germination. Mid-sized plants such as Ceonothus fix nitrogen, while others cannot, which, together with the need for exposure to the sun, creates a symbiotic relationship of the entire community with infrequent fires.[citation needed]

Because of the hot, dry conditions that exist in the California summer and fall, chaparral is one of the most fire-prone plant communities in North America. Some fires are caused by lightning, but these are usually during periods of high humidity and low winds and are easily controlled. Nearly all of the very large wildfires are caused by human activity during periods of very hot, dry easterly Santa Ana winds. These man-made fires are commonly caused by power line failures, vehicle fires and collisions, sparks from machinery, arson, or campfires.

There are two assumptions relating to California chaparral fire regimes that appear to have caused considerable confusion and controversy within the fields of wildfire and land management: first, that older stands of chaparral become “senescent” or “decadent,” thus implying that fire is necessary for the plants to remain healthy,[9] and second, that wildfire suppression policies have allowed dead chaparral to accumulate unnaturally, creating ample fuel for large fires.[10]

The perspective that older chaparral is unhealthy or unproductive may have originated during the 1940s when studies were conducted measuring the amount of forage available to deer populations in chaparral stands[citation needed] . However, according to recent studies, California chaparral is extraordinarily resilient to very long periods without fire [11] and continues to maintain productive growth throughout pre-fire conditions.[12] Seeds of many chaparral plants actually require 30 years or more worth of accumulated leaf litter before they will successfully germinate (e.g. scrub oak: Quercus berberidifolia, toyon: Heteromeles arbutifolia, holly-leafed cherry: Prunus ilicifolia). When intervals between fires drop below 10 to 15 years, many chaparral species are eliminated and the system is typically replaced by non-native, invasive, weedy grassland.[13]