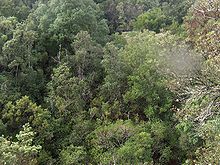 Maquis (French) or macchia (Italian: macchia Mediterranea) is a shrubland biome in the Mediterranean region, typically consisting of densely growing evergreen shrubs such as holm oak, tree heath, strawberry tree, sage, juniper, buckthorn, spurge olive and myrtle. It is found throughout the Mediterranean Basin, including most of coastal Italy, southern France, Lebanon, Sardinia, Corsica, and elsewhere.

It is similar to the English heath in many aspects, but with taller shrubs, typically 2–4 m high as opposed to 0.2–1 m for heath. Similar habitat types exist in North America, South Africa and Australia, and are known as chaparral, fynbos and kwongan, respectively, although the kinds of shrubs involved in these other habitats are different.

Although maquis is by definition natural, its appearance in many places is due to destruction of forest cover, mainly by frequent burning that prevents young trees from maturing. It tends otherwise to grow in arid, rocky areas where only drought-resistant plants are likely to prosper.

The word comes from the plural of Italian macchia (English "thicket"). The extremely dense nature of maquis made it ideal cover for bandits and guerrillas, who used it to shelter from the authorities. It is from this meaning that the Second World War French resistance movement, the Maquis, derived its name. In Italian darsi alla macchia means "becoming a fugitive".