Deserts and xeric shrublands is a biome characterized by, relating to, or requiring only a small amount of moisture.[1]

Deserts and xeric shrublands receive an annual average rainfall of ten inches or less, and have an arid or hyperarid climate, characterized by a strong moisture deficit, where annual potential loss of moisture from evapotranspiration well exceeds the moisture received as rainfall. Deserts and xeric shrublands occur in tropical, subtropical, and temperate climate regions. Desert soils tend to be sandy or rocky, and low in organic materials. Saline or alkaline soils are common. Plants and animals in deserts and xeric shrublands are adapted to low moisture conditions. Hyperarid regions are mostly devoid of vegetation and animal life, and include rocky deserts and sand dunes. Vegetation in arid climate regions can include sparse grasslands, shrublands, and woodlands. Plants adapted to arid climates are called xerophytes, and include succulent plants, geophytes, sclerophyll, and annual plants. Animals, including insects, reptiles, arachnids, birds and mammals, are frequently nocturnal to avoid moisture loss. 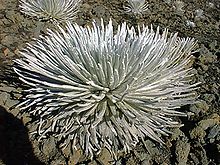 In isolation, Hawai'i's Silverswords have adapted to xeric microclimates within volcanic craters, trapping and channeling dew and protecting leaves with reflective hairs.

The conversion of productive drylands to desert conditions is known as desertification, and can occur from a variety of causes. One factor is human intervention in imposing intensive agricultural tillage or overgrazing[2] in areas which cannot support such exploitation. Climatic shifts such as global warming or the Milankovitch cycle (which drives glacials and interglacials) also affect the pattern of deserts on Earth.