McPherson was born in Gettysburg, Pennsylvania, and attended the common schools. He graduated from Pennsylvania College as valedictorian in 1848 and studied law and botany. After passing the bar exam, he joined the practice of Thaddeus Stevens in Lancaster and came to share Stevens' political views as a Whig. Falling ill, McPherson left the law practice and moved to Harrisburg, where he briefly edited the Harrisburg American in 1851. He returned to Lancaster to edit the Independent Whig from 1851–54, and the Pittsburgh Daily Times in 1855. He moved back to Gettysburg in 1856 and resumed his legal career. His father died in 1858 and willed him a large farm two miles west of town along the Chambersburg Turnpike.

That same year, McPherson was nominated to represent Pennsylvania's 17th District in the United States House of Representatives. He was elected as a Republican to the Thirty-sixth and Thirty-seventh Congresses, serving from 1859 through March 1863. He was a member of the Republican National Committee in 1860. He was an unsuccessful candidate for reelection in 1862 to the Thirty-eighth Congress when his district was expanded to include Somerset County, a moderate region opposed to McPherson's Radical Republican views. President Abraham Lincoln appointed McPherson as Deputy Commissioner of Internal Revenue in 1863. 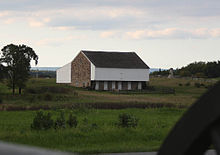 The Battle of Gettysburg ruined the crops and pastures of McPherson's tenant farmer, John Slentz, and caused considerable damage to fences, buildings, property and supplies, for which McPherson was never compensated (McPherson sold the farm in 1868).[citation needed]

McPherson presided over the Republican National Convention in 1876. President Rutherford B. Hayes appointed him as Director of the United States Bureau of Engraving and Printing in 1877 and 1878. Returning to the newspaper business, he was editor of the Philadelphia Press from 1877 until 1880. He also served as editor of the New York Tribune Almanac from 1877–1895 and was editor and proprietor of a newspaper in Gettysburg from 1880 until 1895. He was the American editor of the Almanach de Gotha.

He and his wife Annie Crawford McPherson were married in 1862 and had four sons and a daughter.