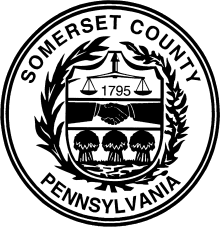 Somerset County is one of the snowiest inhabited locations in the United States, with parts of the county averaging 200+ inches of snow each winter. The county's elevation above sea level relative to surrounding areas causes snow from both Atlantic Ocean Nor'easters and Great Lakes lake effect to fall from October through early April. Snow has been recorded in Somerset County in every month except July, although local lore has it that even July saw snow in 1816, "the year without a summer."

Somerset County gained worldwide attention in 2001 when a hijacked airliner, , crashed near the town of Shanksville in the . (See USS "Somerset", a warship which is to be named in commemoration of the Flight 93 tragedy).

In July 2002, Somerset County again made worldwide news when nine miners were rescued from several hundred feet underground from the after an intense multi-day struggle.

In April 2004, the Pentagon credited of Jenners, Somerset County, as the lone soldier who came forward to halt and expose the prisoner-of-war abuse scandal in , .

Somerset County in Arts and Literature

Nineteenth century poet , the "Hoosier Poet", immortalized Somerset County and its bucolic countryside in his poem "'Mongst the Hills of Somerset". The poem's opening line is the unforgettable "'Mongst the hills of Somerset, I wish I were a'roamin' yet."

Under Pennsylvania law, there are four types of incorporated municipalities: cities, boroughs, , and, in at most two cases, towns. The following boroughs and townships are located in Somerset County:

s are geographical areas designated by the U.S. Census Bureau for the purposes of compiling demographic data. They are not actual jurisdictions under Pennsylvania law. Other unincorporated communities, such as villages, may be listed here as well.

There are 4 Pennsylvania state parks in Somerset County.
*
*
*
*