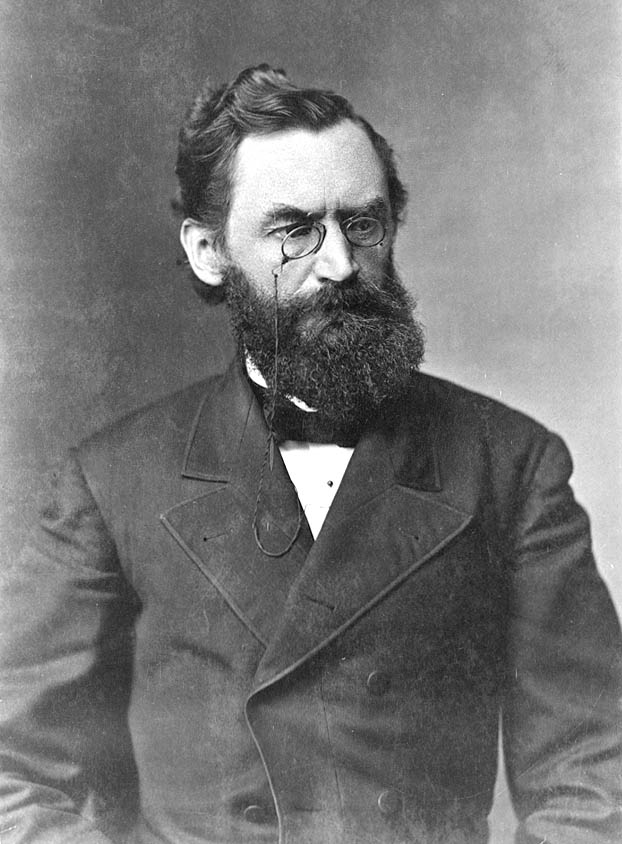 Carl Schurz (March 2, 1829 &ndash; May 14, 1906) was a German revolutionary, American statesman and reformer, and General in the . He was also an accomplished journalist, newspaper editor and noted orator, who in 1869 became the first German-born American elected to the . [ [http://www.wisconsinhistory.org/dictionary/index.asp?action=view&term_id=2626&search_term=schurz Schurz, Carl 1829 - 1906 ] ]

His wife, , and her sister, , were instrumental in establishing the system in the United States. [ [http://www.wisconsinhistory.org/dictionary/index.asp?action=view&term_id=1676&search_term=schurz Schurz, Margarethe [Meyer (Mrs. Carl Schurz) 1833 - 1876 ] ] During his later years, Schurz was perhaps the most prominent independent in American politics, noted for his high principles, his avoidance of political partisanship, and his moral conscience. [ [http://query.nytimes.com/gst/abstract.html?res=9F07E5DE1331E733A25751C2A9679D946797D6CF&scp=375&sq=american+academy+of+arts+and+letters&st=p "Nation's Orators Glorify Schurz; Carnegie Hall Memorial a People's Tribute. Country Needs Such Men; Chairman Choate Rebukes New York Senators -- Cleveland, Eliot and Others Speak,"] "New York Times." November 22, 1906.]

Schurz was born in Liblar (now part of ) on March 2, 1829, the son of a schoolteacher. He studied at the Jesuit Gymnasium of , and then entered the , where he became a revolutionary, partly through his friendship with , then a professor, and .

In Bonn, he assisted Kinkel in editing the "Bonner Zeitung". He also became a member of the nationalistic Burschenschaft Franconia Bonn, and was active in the . When surrendered, ending the revolution, he escaped to . In 1850, he returned secretly to Germany, rescued Kinkel from prison at and helped him to escape to . Schurz then went to , but the police forced him to leave France on the eve of the coup d'état, and he moved to . Remaining there until August 1852, he made his living by teaching the . He married Ronge's sister-in-law, Margarethe Meyer, in July 1852 and then moved to America. Living initially in , the Schurzes moved to Watertown, Wisconsin, where Carl nurtured his interests in politics and Margarethe began her seminal work in early childhood education. Schurz is probably the best known of the , the German s who came to the United States after the failed liberal revolutions.

Politics in the United States

In 1855, Schurz settled in Watertown, Wisconsin, where he immediately became immersed in the anti-slavery movement and in politics, joining the Republican Party of . In 1857, he was an unsuccessful Republican candidate for lieutenant-governor. In the campaign of the next year between and , he took part as a speaker on behalf of Lincoln&mdash;mostly in German&mdash;which raised Lincoln's popularity among German-American voters. Later, in 1858, he was admitted to the Wisconsin bar and began to practice law in Milwaukee. In the state campaign of 1859, he made a speech attacking the Fugitive Slave Law and arguing for state's rights. Outside of the state, in , , on April 18, 1859, [Hirschhorn, p. 1713.] he delivered an oration on "True Americanism," which, coming from an alien, was intended to clear the Republican party of the charge of "nativism". The Germans of Wisconsin unsuccessfully urged his nomination for governor by the Republican party in 1859. In the , Schurz was spokesman of the delegation from Wisconsin, which voted for ; despite this, Schurz was on the committee which brought Lincoln the news of his nomination.

In spite of Seward's objection, grounded on Schurz's European record as a revolutionary, Lincoln sent him in 1861 as ambassador to Spain. He succeeded in quietly dissuading Spain from supporting the South. Persuading Lincoln to grant him a commission in the Union army, Schurz was commissioned brigadier general of Union volunteers in April, and in June took command of a division, first under , and then in 's corps, with which he took part in the . He was promoted major general of volunteers on March 14 and was a division commander in the XI Corps at the , under General , with whom he later had a bitter controversy over the strategy employed at that battle, resulting in their defeat by Thomas J. "Stonewall" Jackson. He was at Gettysburg, (a victory for the Union) commanding the Third Division of Howard's XI Corps, and at Chattanooga (also a victory for the Union side). Later, he was put in command of a Corps of Instruction at . He briefly returned to active service, where in the last months of the war when he was with Sherman's army in as chief of staff of 's . He resigned from the army when the war ended.

In the summer of 1865, President sent Schurz through the South to study conditions; they then quarrelled because Schurz approved General H.W. Slocum's order forbidding the organization of militia in . Schurz's report, suggesting the readmission of the states with complete rights and the investigation of the need of further legislation by a Congressional committee, was ignored by the President. In 1866, Schurz moved to Detroit, where he was chief editor of the "". The following year, he moved to St. Louis, becoming editor and joint proprietor with of the "Westliche Post" (Western Post), where he hired Joseph Pulitzer as a cub reporter. In the winter of 1867-1868, he travelled in Germany &ndash; the account of his interview with is one of the most interesting chapters of his "Reminiscences". He spoke against "repudiation" and for "honest money" during the Presidential campaign of 1868.

In 1869, he was elected to the from , becoming the first German American in that body. He earned a reputation for his speeches, which advocated fiscal responsibility, anti-imperialism, and integrity in government. During this period, he broke with the administration, starting the Liberal Republican movement in Missouri, which in 1870 elected governor. In 1872, he presided over the Liberal Republican convention, which nominated for President (Schurz's own choice was Charles Francis Adams or ). The convention did not represent Schurz's views on the tariff. He opposed Grant's policy&mdash;after Fessenden's death, Schurz was a member of the Committee on Foreign Affairs&mdash;his Southern policy, and the government's selling arms and making cartridges for the French army in the . In 1875, he campaigned for , as the representative of , in the governor's campaign.

In 1876, he supported Hayes for President, and Hayes named him Secretary of the Interior, following much of his advice in other cabinet appointments and in his inaugural address. In this department, Schurz put in force his theories in regard to merit in the , permitting no removals except for cause, and requiring competitive examinations for candidates for clerkships. His efforts to remove political patronage met with limited success. As an early conservationist, he prosecuted land thieves and attracted public attention to the necessity of forest preservation.

During Schurz's tenure as Secretary of the Interior, there was a movement, strongly supported by Gen. William Tecumseh Sherman, to transfer the Office of Indian Affairs to the War Department. ["ARMY CHARGES ANSWERED; THE INDIAN SERVICE UPHELD BY MR. SCHURZ. WHY IT WOULD BE UNWISE TO TRANSFER THE INDIAN BUREAU TO THE WAR DEPARTMENT--INCONSISTENT AND INACCURATE STATEMENTS BY MILITARY OFFICERS--LOOSE MANAGEMENT UNDER THE ARMY. INCONSISTENT AND INACCURATE STATEMENTS BY ARMY OFFICERS. ALLEGED ARMY DISHONESTY. MEASURES OF IMPORTANCE. MR. SCHURZ CROSS-EXAMINED. OTHER WITNESSES," "The New York Times," Dec. 7, 1878, p. 5 [http://query.nytimes.com/gst/abstract.html?res=9B03E5D8153EE73BBC4F53DFB4678383669FDE] ] Restoration of the Indian Office to the War Department, which was anxious to regain control in order to continue its "pacification" program, was opposed by Schurz, and ultimately the Indian Office remained in the Interior Department. The Indian Office had been the most corrupt of the Interior Department. Positions there were based on political patronage and seen as granting license to use the reservations for personal enrichment. Schurz realized that the service would have to be cleansed of corruption before anything positive could be accomplished, so he instituted a wide-scale inspection of the service, dismissed several officials, and began civil service reforms, where positions and promotions were based on merit, not political patronage. [Trefousse, Hans L., "Carl Schurz: A Biography", (U. of Tenn. Press, 1982)]

Schurz's leadership of the Indian Affairs Office was not uncontroversial. His role in the abrogation of treaties made with various native American Indian tribes is chronicled in Dee Brown's work, "". While certainly not an architect of the campaign to push Native Americans off their lands and into tribal reservations, Schurz continued the previous practice of the Bureau of Indian Affairs of resettling tribes on reservations. In response to several nineteenth century reformers, however, Schurz later rescinded his approval of the policy of removing Indians from their homelands, promoting assimilationist policies that were in favor among reformers at the time. [Hoxie, Frederick E. "A Final Promise: The Campaign to Assimilate the Indians, 1880-1920," Lincoln, NE: University of Nebraska Press, 1981.] ["Annual Report of the Secretary of the Interior, November 1, 1880," In Prucha, Francis Paul, ed., "Documents of United States Indian Policy," Lincoln, NE: University of Nebraska Press, 2000. ] [http://books.google.com/books?id=COTvocv68koC&pg=PA152&lpg=PA152&dq=schurz+secretary+interior+indian+affairs&source=web&ots=xzokGEcApy&sig=KzZdvifNlB4-O18PMGGUV68sZm8&hl=en&sa=X&oi=book_result&resnum=5&ct=result]

Upon his retirement in 1881, Schurz moved to New York City, and from the summer of 1881 to the autumn of 1883 was editor-in-chief and one of the proprietors of the "". In 1884, he was a leader in the Independent (or ) movement against the nomination of for president and for the election of . From 1888 to 1892, he was general American representative of the . In 1892 he succeeded as president of the and held this office until 1901. He succeeded Curtis as editorial writer for "" in 1892&ndash;1898, actively supporting electoral reform. In 1895 he spoke for the Fusion anti- ticket in New York City. He opposed for president in 1896, speaking for sound money and not under the auspices of the Republican party; he supported Bryan four years later because of anti- beliefs, which also led to his membership in the . In the 1904 election he supported , the Democratic candidate. Carl Schurz lived in a summer cottage in Northwest Bay on Lake George, New York which was built by his good friend .Throughout his life, Schurz never hesitated to deliver his opinion, and was known by politicians as elevated as Presidents Lincoln and Johnson for his frequent, vitriolic letters. Because of his strongly worded speeches and editorials and his deeply held convictions, he was a hero to his supporters, but widely disliked by his critics. He had a strong connection to the immigrant community. He told a group of German immigrants at the Chicago World's Fair in 1893 how he expected them to fit into American society:

Schurz died in New York City and is buried in , .

churz on "The True Americanism"

Schurz is memorialized in numerous places around the United States:
*, a 14.9 acre (60,000 m²) park in , adjacent to , overlooking the waters of . Named for Schurz in 1910, it is the site of , the residence of the since 1942
*'s 1913 of Schurz at Morningside Drive and 116th Street in New York City
* Carl Schurz and Abraham Jacobi Memorial Park in Bolton Landing, New York
* Schurz, Nevada named after him
* Carl Schurz Drive, a residential street in the northern end of his former home of Watertown, Wisconsin
* Schurz Elementary School, in Watertown, Wisconsin
* "Carl Schurz Park", a private membership park in Stone Bank (Town of Merton), Wisconsin, on the shore of Moose Lake
* Schurz Monument ("Our Greatest German American") in Menomonee Park, [http://www.wisconsinhistory.org/whi/fullRecord.asp?id=43521&qstring=http%3A%2F%2Fwww%2Ewisconsinhistory%2Eorg%2Fwhi%2Fresults%2Easp%3Fsearch%5Ftype%3Dbasic%26keyword1%3Dschurz%26submit%3DSUBMIT]
*, a historic landmark in , built in 1910.
* Schurz Hall, a student residence at the .
* Carl Schurz Elementary School in
* Mount Schurz, a mountain in eastern Yellowstone, north of and south of Atkins Peak, named in 1885 by the United States Geological Survey, to honor Schurz's commitment to protecting
* In 1983, the US Postal Service issued a 4-cent stamp with his name and face
*libship honor|name=Carl Schurz|type=his

The base in , Germany was also named for Schurz - Karl Schurz Kaserne. The base served as a logistical hub for U.S. forces in Germany. The base was returned to the German government in 1996, following the end of the .