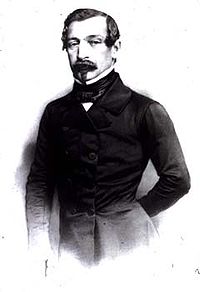 Louis-Napoléon Bonaparte,
President of the French Second Republic in 1851

The French coup d'état on 2 December 1851, staged by Prince Louis-Napoléon Bonaparte (at the time President of the French Second Republic), ended in the successful dissolution of the French National Assembly, as well as the subsequent re-establishment of the French Empire the next year. Louis-Napoléon, nephew of Napoléon Bonaparte, reclaimed his uncle's throne as Emperor of the French (taking the regnal name Napoléon III) and reestablished universal suffrage (previously abolished by the Assembly). His decisions and the extension of his mandate for 10 years were popularly endorsed by referendum.

In 1848, Louis-Napoleon Bonaparte was elected President of France through universal suffrage, taking 74% of the vote. He did this with the support of the Parti de l'Ordre after running against Louis Eugène Cavaignac. Subsequently, he was in constant conflict with the members (députés) of the Assemblée Nationale.

Contrary to the Party's expectations that Louis-Napoleon would be easy to manipulate (Adolphe Thiers had called him a "cretin whom we will lead [by the nose]"), he proved himself an agile and cunning politician. He succeeded in imposing his choices and decisions on the Assemblée, which had once again become conservative in the aftermath of the June Days Uprising in 1848. He broke away from the control of the Parti de l'Ordre and created the Ministère des Commis, appointing General Hautpoul as its head, in 1849. On 3 January 1850, he dismissed Changarnier, a dissident in the Parti de l'Ordre, thereby provoking an open conflict within the party. He also actively encouraged the creation of numerous anti-parliament newspapers and acquired the support of 150 members of Parliament, the "Parti de l'Elysée".

The provisions of the constitutions that prohibited an incumbent president from seeking re-election appeared to force the end of Louis-Napoleon's rule in December 1852. Not one to admit defeat, Louis-Napoleon spent the first half of 1851 trying to force changes to the constitution through Parliament so he could be re-elected. Bonaparte travelled through the provinces and organised petitions to rally popular support. Two-thirds of General Council supported Louis-Napoleon's cause, but in the Assembly, supporters of the Duke of Orléans, led by Thiers, concluded an alliance with the far left to oppose Louis-Napoleon's plans. In January 1851, the Parliament voted no confidence in the Ministère des Commis. On 19 July, it refused the constitutional reform proposed by Louis-Napoleon, also scrapping universal suffrage in an effort to break popular support for Bonaparte.

Preparations for the coup

The coup d'état was meticulously planned from 20 August 1851. Preparations and planning for this coup took place at Saint Cloud. Among the conspirators were Persigny, a loyal companion of Louis-Napoleon, the Duke of Morny, and General Saint-Arnaud. On 14 October, Louis-Napoleon asked the Parliament to restore universal suffrage but the request was turned down. His request for a reconsideration of the constitutional reform proposal was also turned down on 13 November. Prepared to strike, Louis-Napoleon appointed General Saint-Arnaud as the Minister of War and a circular was issued reminding soldiers of their pledge of "passive obedience". Followers of the President were appointed to various important positions: General Magnan as the Commander of the Troops of Paris, and Maupas, Prefect of Haut-Garonne as Prefect of Police of Paris. Convinced that the coup was now inevitable after the latest refusal, Louis-Napoleon fixed the anniversary of the coronation of Napoleon in 1804, and the victory of Austerlitz in 1805, as the day for the coup. The operation was christened Rubicon, alluding to Julius Caesar.

On the morning of 2 December, troops led by Saint-Arnaud occupied strategic points in Paris, from the Champs-Élysées to the Tuileries. Top opposition leaders were arrested and six edicts promulgated to establish the rule of Louis-Napoleon. The Assemblée Nationale was dissolved, and universal suffrage restored. Louis-Napoleon declared that a new constitution was being framed and said he intended to restore a "system established by the First Consul".

Reacting to this coup, parliamentarians took refuge in the mayor's office of the 20th arrondissement of Paris and 220 of them voted to oust Louis-Napoleon from power. Most prominent among these were liberals like Remusat and moderates like Pascal Duprat, who were arrested soon after. A Parisian insurrection led by the likes of Victor Hugo and Victor Schoelcher erupted despite tight control by the Army. The insurgents were soon defeated. On 3 December, parliamentarian Alphonse Baudin was killed and on 4 December, 200 more people fell victim to the revolution. By evening, the revolt of Paris was suppressed and the city returned to normal.

Revolt in other places

The coup triggered off revolts in other places across France. On 5 December, rebellions were reported in big cities in the south-west of France. The department of Basses-Alpes even declared itself administered by a "Committee of Resistance" but the army, still loyal to the President, succeeded in quelling the rebellion. A total of 32 departments were put under a state of alert from 8 December and the rebellious areas were controlled in a few days. Opponents were arrested and some were forced to flee. Victor Hugo fled to Brussels, then Jersey, and finally settled with his family on the Channel Island of Guernsey at Hauteville House, where he would live in exile until 1870. By the end of the rebellion, 26,000 people were arrested, 9,530 were sent to Algeria and 250 to the prison of Cayenne.

The Bonapartists were finally assured of a victory. Generals Vaillant and Harispe became Marshal of France on 11 December. A new constitution was being drafted. A referendum was organised to ratify the new order and the coup was portrayed as a security operation.

On 20 and 21 December, the French voted for the acceptance of the new regime by an overwhelming majority of 7,145,000 to 600,000. Louis-Napoléon now had the power to draft a new constitution.

The Constitution of France underwent a modification. The new constitution bestowed executive power on a President, elected for a period of 10 years. He was also vested with the power of legislative initiative, thereby reducing the scope of the Parliament. This succeeded in concentrating power in the hands of an authoritarian executive.

In less than a year, the Second Republic transformed into the Second Empire, established by a referendum on 7 November 1852. President Louis-Napoleon Bonaparte, elected by the French people, officially became Napoleon III, Emperor of the French, from the symbolic and historic date of 2 December 1852.