Marine Fighting Squadron 221 (VMF-221) was a fighter squadron of the United States Marine Corps in World War II. During the war, they flew the Brewster Buffalo and after reconstitution in 1943, the venerable F4U Corsair. The squadron, also known as the “Fighting Falcons,” is most notable for its actions on June 4, 1942 during the Battle of Midway, which resulted in 23 members of the squadron being awarded the Navy Cross for their actions in combat. VMF-221 ended WWII with 185 air to air victories, the second most of any Marine Fighting Squadron in the war.

VMF-221 was formed in July 1941 in San Diego, California. In December of that year, following the attack on Pearl Harbor, they moved to Marine Corps Air Station Ewa in Hawaii. On December 25, 1941, fourteen F2A-3 Brewster Buffalos landed on Midway Island after launching from the USS Saratoga. On March 1, 1942, VMF-221, VMSB-241 and their headquarters units formed Marine Aircraft Group 22 commanded by Lieutenant Colonel Ira B. Kimes. 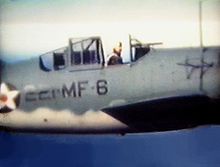 The squadron’s first taste of combat came on March 10, 1942 when four of its pilots recorded the first kills in a Brewster Buffalo, downing a Japanese H8K Patrol Boat. 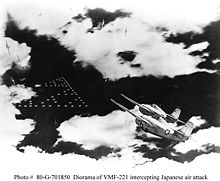 Diorama by Norman Bel Geddes, depicting the lead elements of VMF-221 intercepting the Japanese air strike formation headed toward Midway on the morning of 4 June 1942.

By late May, the squadron had been augmented with the arrival of additional aircraft. VMF-221 had 21 F2A-3s and 7 Grumman F4F-3 Wildcats. On June 4, 1942, during the Battle of Midway, the pilots of VMF-221 were alerted to intercept the incoming formation of Japanese bombers and the 36 escorting Zeros fighters that were headed towards the island. The Marines and their Brewster Buffalos were no match for the faster and more agile Zeros, flown by more experienced aviators. The squadron accounted for 17 aircraft shot down, but at the catastrophic cost of thirteen F2A-3s and two F4F-3s shot down and 15 pilots killed in action, including the commanding officer, Major Floyd B. Parks. Only two of VMF-221's remaining 13 aircraft were flyable, effectively destroying the squadron. Four of the squadrons ordnancemen were also killed when a Japanese bomb stuck the ammunition area near the airstrip at Midway. For their actions during the Battle, VMF-221 was awarded the Presidential Unit Citation. After the battle, one of the surviving members of the squadron noted, “It is my belief that any commander who orders pilots out for combat in an F2A should consider the pilot as lost before leaving the ground.”

Following the Battle of Midway, the squadron was transferred back to Ewa and was one of three marine fighting squadrons that made up MAG-21. As new pilots arrived in Hawaii and additional aircraft became available, the squadron was slowly rebuilt. In January, MAG-21 was notified for deployment and the three squadrons were loaded aboard the U.S.S. Nassau and transported to Espiritu Santo. Upon arrival, VMF-214 and VMF-221 sent detachments to Guadalcanal, but VMF-213 was held back and selected to become one of the first squadrons to be equipped with the F4U "Corsair." Most of VMF-221's tour at Guadalcanal consisted of combat air patrols over Guadalcanal, but the large raid on April 1, 1943, resulted in Lt James Swett's Medal of Honor action.

After transition to the F4U-1, VMF-221 supported operations during the Battle of Guadalcanal, while also striking Japanese shipping in the vicinity of Bougainville. During the landings on the first day of the Battle of New Georgia, VMF-221 pilots got credit for shooting down 16 Japanese aircraft[1] In December 1943, they were sent back to the states for another reorganization. 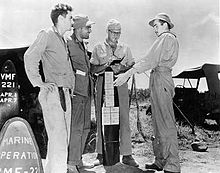 1st Lt. James E. Swett, with other members of his VMF-221 squadron, describing his Medal of Honor actions.

The following members of VMF-221 were credited with at least 5 enemy aircraft shot down: