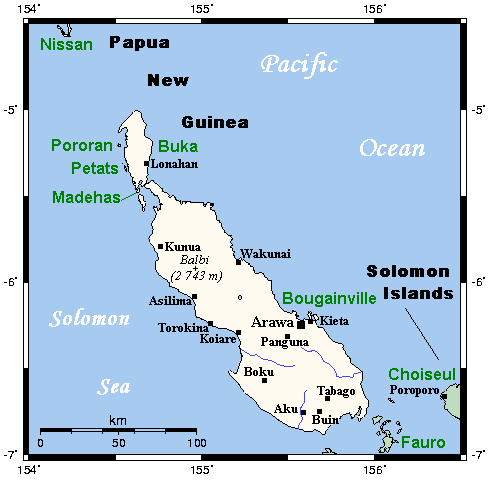 In the 1970s, (BCL, a subsidiary of ) began exploiting the island's huge copper reserves. Resentment over the negative effects of the company's activities on the area and the lack of any tangible benefit to the islanders erupted into conflict in the 1990s. Attempts at proclaiming the independence of Bougainville () have occurred twice: in 1975 and 1990. In the second case the government of moved to put down what became a secessionist movement led by , a former surveyor for BCL. The PNG army received from and enlisted the support of , a firm. The island was embargoed to weaken its people's resistance. However, they proved much more resilient than expected, designing their own weapons and converting engines to . Peace talks brokered by began in 1997, leading to autonomy for the island.

Bougainville and its 1990s struggle for independence is the setting for the 2007 novel "", by New Zealand author Lloyd Jones.

named the island after himself.

A documentary about the struggle of the indigenous population to save their island from environmental destruction and gain independence, was made in 1999, called . [cite web| title=Coconut Revolution, The (Bougainville story)| publisher=CultureShop.org| month=November| year=2001| url=http://www.cultureshop.org/details.php?code=COCOREV| accessdate=2008-01-27]

There are several indigenous languages in Bougainville. These include both and languages.

In the nearby atolls of Mortlock Islands, an Austronesian language of the Polynesian sub group is spoken

None of these languages is spoken by more than 20% of the entire population of Bougainville, and the largest languages such as Nasioi, Motuna, Buin and Halia are split into dialects that are not always mutually understandable. For general communication most Bougainvilleans use as a , and at least in the coastal areas Pisin is often learned by children in a bilingual environment. English and Tok Pisin are the languages of official business and government.