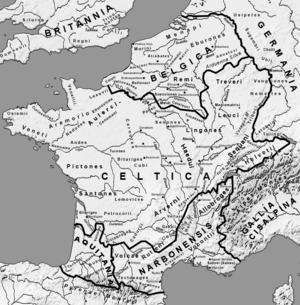 The Roman Provinces in Gaul around 58 BCE; note that the coastline shown here is the modern one, different from the ancient coastline in some parts of the English Channel 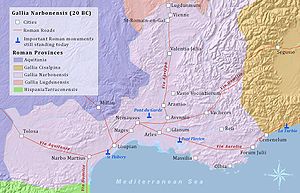 The Roman Province of Gallia Narbonensis in 20 BCE

Gallia Narbonensis (English: Narbonese Gaul, from the chief settlement of Narbonne) was a Roman province located in what is now Languedoc and Provence, in southern France. It was also known as Gallia Transalpina (Transalpine Gaul), which was originally a designation for that part of Gaul lying across the Alps from Italia and it contained a western region known as Septimania (see Septimania timeline). It became a Roman province in the late 2nd century BCE, constituting the first significant Roman territory outside of Italy. Its boundaries were roughly defined by the Mediterranean Sea to the south and the Cévennes and Alps and north and west.

The province of Gallia Transalpina (Transalpine Gaul) was later renamed Gallia Narbonensis, after its capital the Roman colony of Narbo Martius (Narbonne), founded on the coast in 118 BCE. The Romans called it Provincia Nostra ("our province") or simply Provincia ("the province"), being the first significant permanent conquest outside the Italian peninsula. The name has survived in the modern French name of the region, Provence, now a région of France.

By the mid-2nd century BCE, Rome was trading heavily with the Greek colony of Massalia (modern Marseille) on the southern coast of Gaul. Massalia, founded by colonists from Phocaea, was by this point centuries old and quite prosperous. Rome entered into an alliance with Massalia, by which it agreed to protect the town from local Gauls and other threats, in exchange for a small strip of land that it wanted in order to build a road from Italy to Spain, to assist in troop transport. The Massalians, for their part, cared more for their economic prosperity than they did their territorial integrity. In this strip of land, the Romans founded the town of Narbonne, which turned out to be a major trading competitor with Massalia. It was from this that what was then the province of Transalpine Gaul was founded.

During this period, the Mediterranean settlements on the coast were threatened by the powerful Gallic tribes to the north, especially the tribes known as the Arverni and the Allobroges. In 123 BCE, the Roman general Quintus Fabius Maximus Allobrogicus campaigned in the area and defeated the Allobroges and the Arverni under king Bituitus. This defeat substantially weakened the Arverni and ensured the further security of Gallia Narbonensis.

Bordering directly on Italy, control of the province gave the Roman state several advantages, such as control of the land route between Italy and the Iberian peninsula; a buffer against attacks on Italy by tribes from Gaul; and control of the lucrative trade routes of the Rhone valley, over which commercial goods flowed between Gaul and the trading center of Massalia. It was from the capital of Narbonne that Julius Caesar began his Gallic Wars.