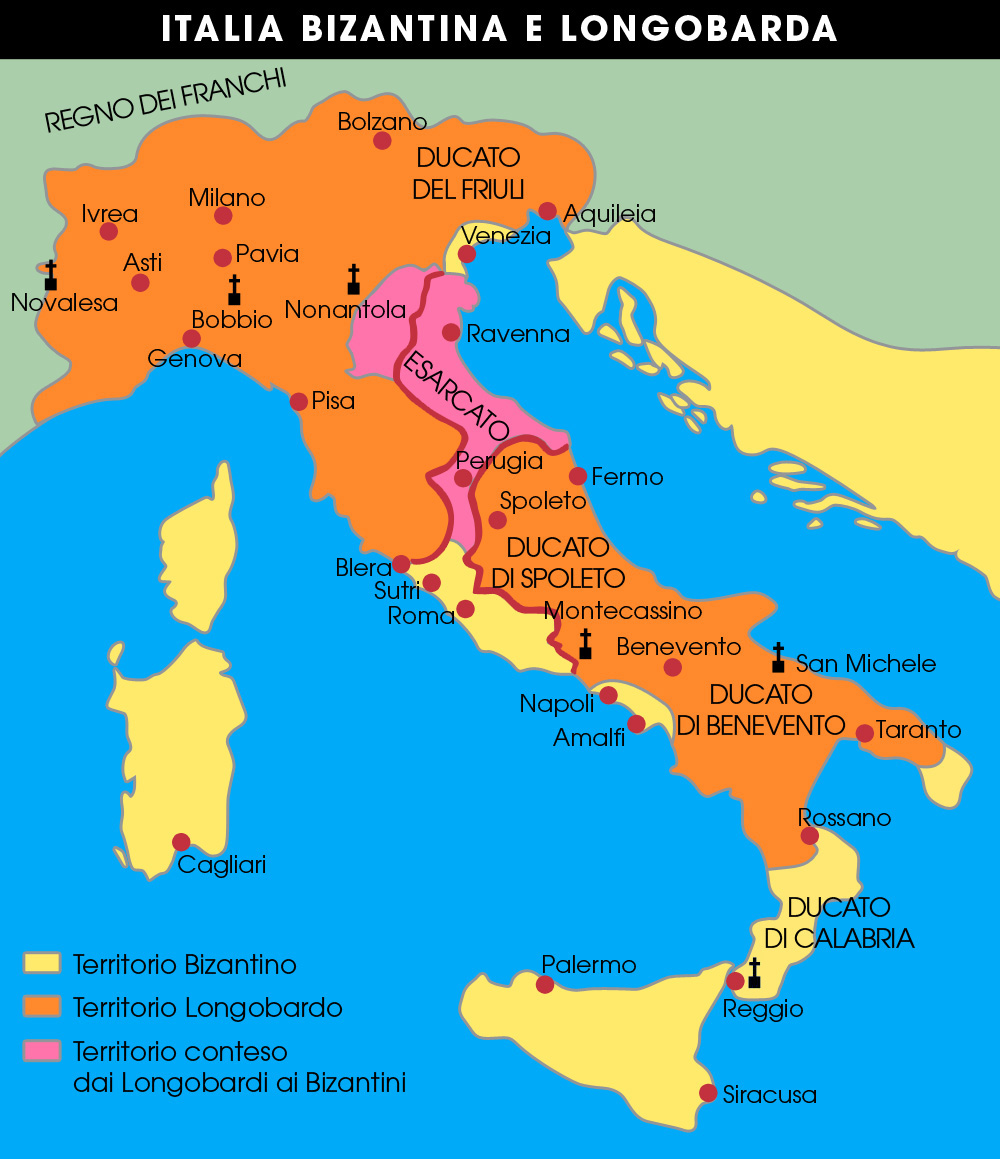 The Exarchate of Ravenna or of Italy was a centre of Byzantine power in , from the end of the to , when the last (Byzantine governor) was put to death by the Emperor's enemies in Italy, the .

The Lombard invasion and Byzantine reaction

In 568, the under their king , together with other Germanic allies, invaded northern Italy. The area had only a few years ago been completely pacified, and had suffered greatly during the long Gothic War. The local Roman forces were weak, and after taking several towns, in 569 the Lombards conquered . They took after a three-year siege in 572, and made it their capital. [ cite book |last=Paul the Deacon |title=Historia Langobardorum |chapter=Book 2:ch. 26-27] In subsequent years, they took . Others, under Faroald and , penetrated into central and southern Italy, where they established the duchies of Spoleto and Benevento. [ cite book |last=Hodgkin |title=The Lombard Invasion |series=Italy and Her Invaders, Vol. 5, Book VI |pages=pp. 71-73 ] However, after Alboin's murder in 573, the Lombards fragmented into several autonomous duchies (the "").

Emperor tried to take advantage of this, and in 576 he sent his son-in-law, Baduarius, to Italy. However, he was defeated and killed in battle, [ cite book |last=John of Biclaro |title=Chronicle] and the continuing crises in the and the East meant that another imperial effort at reconquest was not possible. Because of the Lombard incursions, the Roman possessions had fragmented into several isolated territories, and in 580, Emperor reorganized them into five provinces, now termed in Greek, "eparchies": the "Annonaria" in northern Italy around Ravenna, , , and , and the "Urbicaria" around the city of ("Urbs"). Thus by the end of the sixth century the new order of powers had settled into a stable pattern. Ravenna, governed by its exarch, who held civil and military authority in addition to his ecclesiastical office, was confined to the city, its port and environs as far north as the Po, beyond which lay territory of the duke of , nominally in imperial service, and south to the Marecchia River, beyond which lay the on the Adriatic, also under a duke nominally representing the Emperor of the East. [ cite journal |last =Hallenbeck |title =Pavia and Rome: The Lombard Monarchy and the Papacy in the Eighth Century]

The exarchate was organised into a group of duchies (i.e the Duchy of Rome, Duchy of Venetia, Duchy of Calabria, Lucania, Spoleto etc) which were mainly the coastal cities in the Italian peninsula since the Lombards held the advantage in the hinterland.

The civil and military head of these imperial possessions, the exarch himself, was the representative at Ravenna of the emperor in . The surrounding territory reached from the boundary with in the north to the at , the border of the "five cities" in the along the coast; and reached even cities not on the coast, as for instance. All this territory lies on the eastern flank of the Apennines; this was under the exarch's direct administration and formed the Exarchate in the strictest sense. Surrounding territories were governed by s and "magistri militium" more or less subject to his authority. From the perspective of Constantinople, the Exarchate consisted of the province of Italy.

The Exarchate of Ravenna was not the sole Byzantine province in Italy. Byzantine formed a separate government, and and , while they remained Byzantine, belonged to the .

The Lombards had their capital at and controlled the great valley of the Po. The Lombard wedge in Italy spread to the south, and established duchies at Spoleto and Beneventum; they controlled the interior, while Byzantine governors more or less controlled the coasts.

The , , the interior mainland of , and the interior of belonged to the Lombards, and bit by bit the Imperial representative in Italy lost all genuine power, though in name he controlled areas like Liguria (completely lost in 640 to the Lombards), or Naples and (being overrun by the Lombard duchy of Benevento). In Rome, the pope was the real master.

At the end, "ca" 740, the Exarchate consisted of , Venetia (except for the lagoon of itself, which was becoming an independent protected city-state, the forerunner of the future republic of Venice), , Ravenna (the exarchate in the limited sense), with the , and .

These fragments of the province of Italy, as it was when reconquered for Justinian, were almost all lost, either to the Lombards, who finally conquered Ravenna itself about 750, or by the revolt of the pope, who finally separated from the Empire on the issue of the iconoclastic reforms.

The relationship between the in and the Exarch in Ravenna was a dynamic that could hurt or help the empire. The Papacy could be a vehicle for local discontent. The old Roman senatorial aristocracy resented being governed by an Exarch who was considered by many a meddlesome foreigner. Thus the exarch faced threats from without as well as from within, hampering much real progress and development.

In its internal history the exarchate was subject to the splintering influences which were leading to the subdivision of and the establishment of throughout Europe. Step by step, and in spite of the efforts of the emperors at Constantinople, the great imperial officials became local landowners, the lesser owners of land were increasingly kinsmen or at least associates of these officials, and new allegiances intruded on the sphere of imperial administration. Meanwhile the necessity for providing for the defence of the imperial territories against the Lombards led to the formation of local militias, who at first were attached to the imperial regiments, but gradually became independent, as they were recruited entirely locally. These armed men formed the "exercitus romanae militiae", who were the forerunners of the free armed burghers of the Italian cities of the . Other cities of the exarchate were organized on the same model.

The end of the Exarchate

During the 6th and 7th centuries the growing menace of the Lombards and the , and the split between eastern and western Christendom caused by and the acrimonious rivalry between the Pope and the , made the position of the exarch more and more untenable.

Ravenna remained the seat of the exarch until the revolt of 727 over Iconoclasm. , the last exarch of Ravenna, was killed by the Lombards in 751. The exarchate was reorganized as the headquartered in which was lost to the in 858 and only recovered in .

When in the Franks drove the Lombards out, claimed the exarchate. His ally , King of the Franks, donated the conquered lands of the former exarchate to the Papacy in ; this donation, which was confirmed by his son in , marked the beginning of the temporal power of the popes as the . The archbishoprics within the former exarchate, however, had developed traditions of local secular power and independence, which contributed to the fragmenting localization of powers. Three centuries later, that independence would fuel the rise of the independent communes.

So the Exarchate disappeared, and the small remnants of the imperial possessions on the mainland, Naples and Calabria, passed under the authority of the Catapan of Italy, and when Sicily was conquered by the Arabs in the the remnants were erected into the "themes" of Calabria and Langobardia. Istria at the head of the Adriatic was attached to .

"Note: For some exarchs there exists some uncertainty over their exact tenure dates."